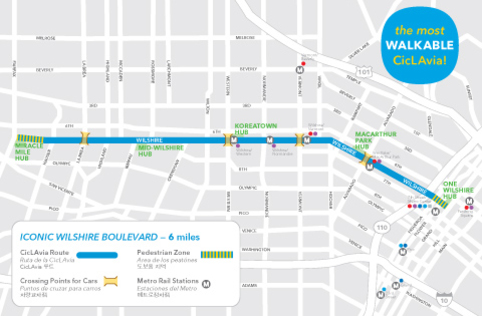 Ciclovias began in Bogota, Colombia as a response to the congestion and pollution of the city streets. Activists in Los Angeles, in turn, began to organize a similar event for the same reasons. With the support of city officials, the first CicLAvia took place on October 10, 2010 from East Hollywood to Hollenbeck Park.

Since then, there have been CicLAvias to other parts of Los Angeles, with the CicLAvia to the Sea route stretching all the way down Venice Blvd. to the borders of Santa Monica. The frequency and variety of these events has led to added popularity and awareness of bikes in the city. Furthermore, CicLAvia demonstrates to LA citizens what the city’s streets can look like without the near-perpetual traffic congestion that beset the city.

The first CicLAvia of 2014 will take place this Sunday and is a favorite from last year’s schedule of events- the Iconic Wilshire Boulevard route. The route stretches from One Wilshire in Downtown LA to Fairfax Avenue along Miracle Mile with additional hubs at MacArthur Park, Koreatown, and Mid-Wilshire. Described as “the most walkable CicLAvia yet,” the route will feature performers, pedestrian-only zones, activities sponsored by several fantastic museums, programming by some of CicLAvia’s community partners, food trucks, and more.

Santa Monica Spoke is planning a “feeder ride” to CicLAvia, starting at the Santa Monica Pier. To read Spoke’s preview of this Sunday’s CicLAvia, click here.

Who:  Santa Monica Spoke invites bicycle riders of all ages but of at least intermediate skill. The ride will be ten miles to GET TO CicLAvia with some hills, so be sure you can handle 20+ miles of urban cycling.

What: A bicycle ride to CicLAvia, the largest “open streets” ride in Los Angeles County.

Where: The feeder ride meets at the end of the Santa Monica Pier (not actually on the pier…). CicLAvia’s map can be found here.