Home Uncategorized Events: Tree Hugging, An Evening with John McCain, and a Prescreening of... 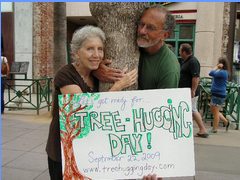 For most of its recent history, the city of Santa Monica has cultivated a reputation as being environmentally friendly, and perhaps even slightly bohemian. If one looks around, it isn’t hard to see where such a reputation would originate: surfers flock to the beaches at dawn, yoga groups are everywhere (though not quite as much anymore), and environmental groups abound. It is from within this milieu that Santa Monica’s annual Tree Hugging Day has taken form.

Originally organized in 2009 by local peace activists Jerry and Marissa Rubin, the event, as its name would suggest, involves the physical hugging of trees. In an interview with the SMDP, Jerry Rubin described the purpose of the event:

“This seems like it would be a positive way to show caring and appreciation for the trees as a community. I’m tired of people that use the word ‘tree hugger’ in a disparaging way to demean an environmentalist.”

Who: People of all ages are encouraged to take a moment of time to hug a tree.

What: The event is based around a group tree hug at the Children’s Tree of Life, a specially designated “peace tree” that was planted on Earth Day, April 22, 1983 at a public peace celebration.

Where: The Children‘s Tree of Life is located in the Santa Monica Palisades Park at Ocean Avenue and Colorado Avenue, just north of the Santa Monica Pier. Participants will also be invited to “branch out” and give hugs to other trees in the nearby park area.