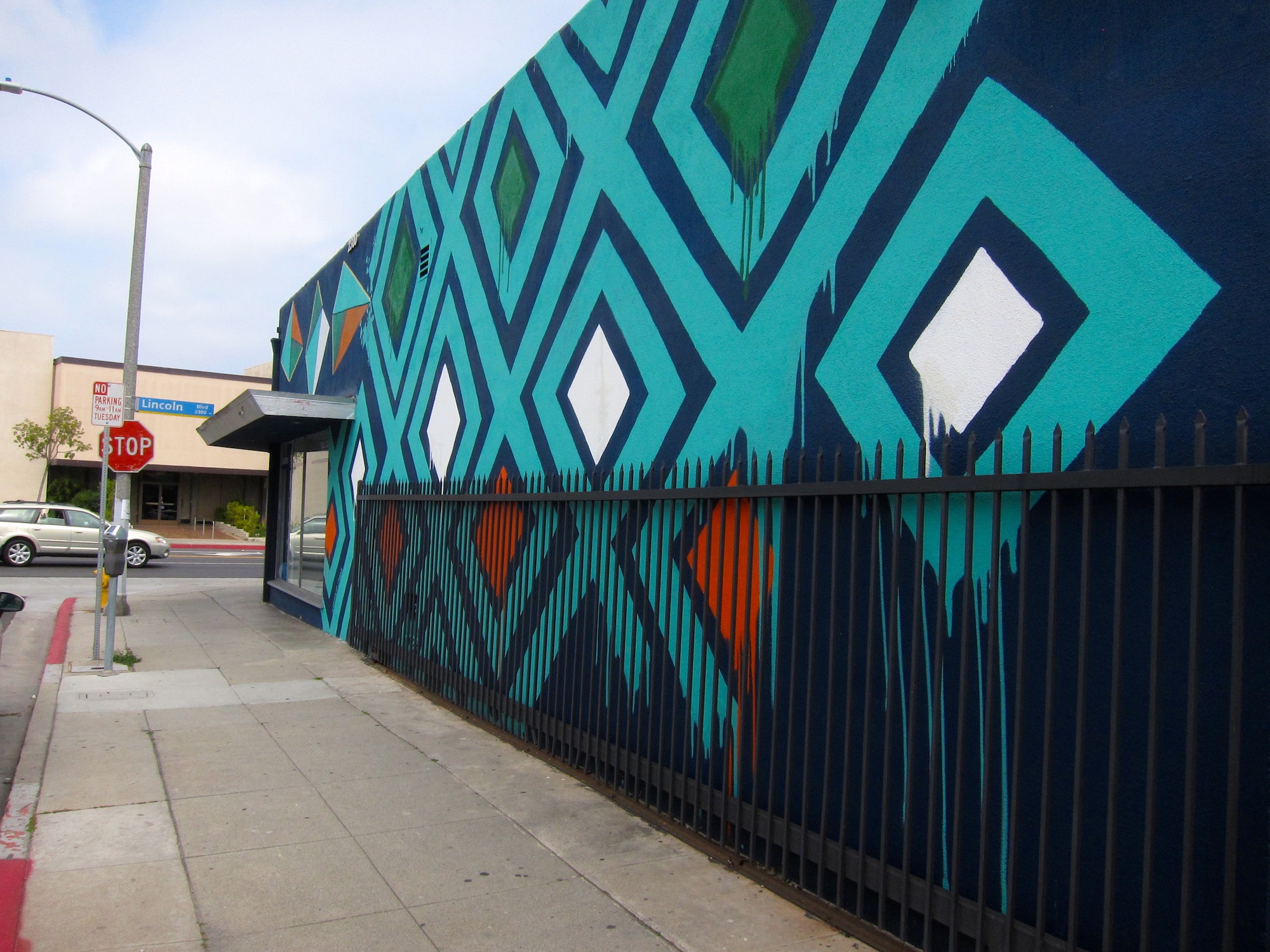 It began as a grassroots effort to pretty up Lincoln Boulevard in Santa Monica by decorating it with colorful street murals. Now the Ocean Park group behind this project wants to take its paintbrushes and go global.

“Ten thousand murals in five years,” is the motto of Beautify Earth, which began two years ago as the Santa Monica-based Beautify Lincoln.  That local enterprise was hatched by Ocean Park Association board member Evan Meyer, who at first simply wanted to spruce up a dreary stretch of Lincoln Boulevard between Ocean Park and Pico Boulevards.

Now Meyer and the group have adopted the name Beautify Earth and are looking to expand. The Santa Monica project has already grown beyond the initial boundaries, with murals being created south of Ocean Park into Venice, and north of Pico further into Santa Monica.  And the group has initiated additional mural projects in Los Angeles’ Crenshaw neighborhood and two in New York.

Meyer’s group literally wants to make the world a more beautiful place by bringing art and murals to the world’s most blighted areas, according to the group’s Facebook page. Why? Because, the group says,  “art creates change.”

Change would certainly be welcome along Lincoln Boulevard, a long-suffering street with too many auto repair shops, dirt-encrusted sidewalks and a general aura of a place that you just want to get away from in a hurry.

The Beautify Lincoln project has certainly made a difference along some patches of the street, where colorful, abstract murals have brightened up the view. Then there are other sections where Lincoln looks like, well, pretty much like it’s always looked, as in not ready for its close-up. Businesses are shuttered, with posted notices piling up on doors, streets are cluttered with trash-strewn grocery carts, and pedestrians are rarely seen.

One Lincoln business owner supportive of Meyer’s work is Jon Stevenson, who recently took over the Trip Bar a couple of blocks south of Pico Boulevard. The bar sports a mural of multicolored swirls and dripping designs on its side and front, murals painted by Beautify Lincoln.

“I knew Lincoln when it was just ladies of the night and No Tell Motels,” he said, thinking back to when he was a high school student in Santa Monica in the 1970s. “This area has never been great, but it’s getting better.’

Stevenson acknowledged that some business owners have not participated in the murals project, but they have nonetheless taken it upon themselves to tidy up their storefronts on their own, motivated by the artwork going up on walls around them.

The Lincoln Boulevard Task Force has praised Beautify Lincoln’s efforts, saying it has added “visual excitement to the street.”

Making sure those visual thrills continue is Beautify Lincoln’s project leader, Heather Rabun. She said she has been going out and trying to enlist more and more businesses to participate.

“As soon as they hear it’s free and they don’t have to pay for it, they are more receptive to getting the art,” she said. Still, she says, some owners have concerns about the quality of the work, whether it will incur city scrutiny over sign laws, and the amount of time they will have to spend on the project.

Beautify Earth actually makes the work relatively painless for business owners. It’s a grassroots effort that relies mostly on volunteer artists and donated supplies. Artists are willing to do it because it gives them exposure for their work. The group also seeks donations.  Business owners can select an artist or style that they like and the group does the rest, bringing out a crew to bring the mural to reality.

“It’s fun to get out there with a group to paint and hang out. The community aspect of it is fun,” says Rabun, a dancer and ballet teacher who joined the group because she says that painting is a hobby and because she enjoys seeing the results of her work.

Even with the growing number of murals along Lincoln, Rabun and others say that more will be needed to help the street become more of a desired destination.

“It needs sidewalk cafes and people being able to eat outside to where it can be more than just car repair businesses,” says Mark Moralez, manager of the Printing Palace, which features a mural of colorful geometric pattern along its outside walls. Moralez said that when the mural was first painted it generated a lot of attention.

“It gets people talking about it whether they love it or hate it,” he said. “But I don’t know if it’s really done anything for business, other than people coming in to voice their opinion.”

A few doors away, at the Bicycle Ambulance store, owner Newton Barnes said he’s been happy with Beautify Lincoln’s work on his storefront, which includes a painting of a light blue cloud framing the store’s sign and a silhouettes of birds perched on a wire.

“The murals are pretty cool, “ he said. “Before it used to be a dark corner and now you can spot it from a distance.”

When asked what else could be done to improve Lincoln, Barnes replied with a laugh: “More parking, but what can I do about that part?”