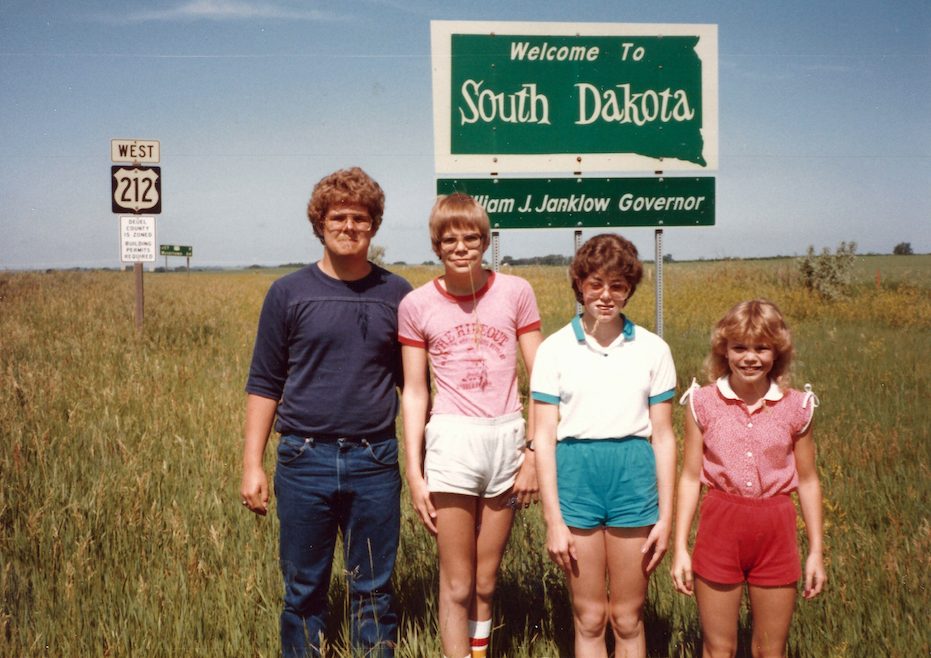 Facebook
Twitter
Pinterest
WhatsApp
In one photo, a family of four smiles toward the camera on Easter morning, while just off to the side grandpa is seen chugging a can of beer.

In another shot, a young boy happily blows out candles on his birthday cake as dad hoovers nearby wielding a hammer.

Ah yes, family photographs. Not the glossy portraits of bliss proudly displayed in homes everywhere.  But photographs that reveal a deeper truth about family, that perhaps it’s really, well, a little awkward.

Mike Bender saw one of his own awkward family photographs five years ago when he returned home for his dad’s birthday. It was a shot from a skiing trip to Aspen and his family was posed on top of a mountain, their legs lifted in the air, Rockettes-style.

He cringed, but then he and his writing partner, Doug Chernack, got the idea to launch a blog that would feature some of their awkward family photos, and those of their friends. They also invited visitors to send in their own examples.

“I was shocked that anyone was actually visiting the website in the beginning,” Bender recalled this week.  “I don’t think we had much of a plan of where it would go.”

Where it went was viral, as in a million hits by the end of the first week. Now Awkward Family Photos is a web sensation with a Facebook page that has close to two million likes. It’s also a marketable brand that produces books, calendars and a board game.

Bender and Chernack have also teamed up with the California Heritage Museum in Santa Monica for the first prominent exhibit of Awkward Family Photos. The exhibit features 200 of the most popular photographs from the Awkward collection, which are displayed in an upstairs gallery space. The photographs are divided into ten family themes such as Siblings, Family Portraits, Birthdays and Family Vacations.

Even the frames for the exhibited works are awkward, intentionally so. Made of metal and wood, they are overly ornamental and add to the general sense that something is wrong with these pictures. The brightly-lit gallery space also forces viewer to stare at every inch of awkwardness contained in the works.

The exhibit may be a bit of a stretch for the museum, which has as its mission to promote the history and culture of California. But who care?  The exhibit is a hoot.

And plenty of poor photo choices, such as the parents who decided to pose their toddler boy next to a Hoover vacuum his own height, his arm around the machine as if it’s some kind of human companion.

“If a photo gives you any sense of discomfort, then generally it’s awkward,” Bender said. “There is some crack or chink in the family armor that we are seeing that gives us that discomfort.”

Bender said that he and Chernack were clear from the beginning that the intent of their work was not to demean people. “It’s always been a celebration of awkwardness and family,” he says.

All the photos on their site are from people who willingly submit them.  “We want the families to be in on the joke. It’s a cathartic experience for them,” Bender says.

The photos date from the 1950s to the present. The inelegance of some of the photos stems from the passage of time and changing fashion. Wild hair and outrageous clothing styles from the 1970’s and 1980’s are a popular theme.

Some of the photos include brief stories explaining the circumstances behind how they were taken. Bender also writes titles and captions for the photos, and it’s clear that the aspiring screenwriter relishes the opportunity to utilize his writing skills.

For example, in one hilariously stunning but ill-conceived montage, a mom and two kids are posed portrait-style, while dad’s giant head is superimposed over them, as if they are somehow housed in his cranium. It’s titled “Head of the Family.”

Bender said that a small Wisconsin museum exhibited some of the photos two years ago, but this is the first large-scale project. He said they worked with Angie Behm, who is on the museum’s board, to make it happen. Bender said he liked the idea of the California Heritage Museum because it’s a house, and the photos are all family-themed.  And he believes that the photos deserve to be in a museum.

“From our perspective, some of these photographs felt like art to us,” he said.

The museum, at 2612 Main Street, is open from 11 a.m. until 4 p.m., Wednesday through Sunday. The exhibit runs through July 27. Visitors on Sundays from 10 a.m. until 1 p.m. may have their own awkward family photos taken in a special studio set up by the museum’s exhibition photographer, Julia Varga.