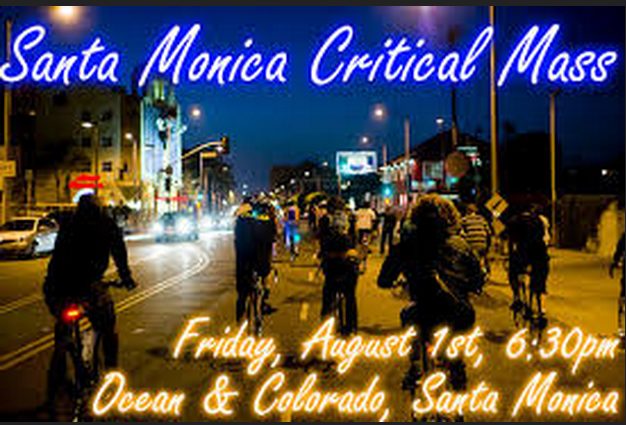 For those that don’t know, Critical Mass is a monthly bike ride that takes place on the 4th Friday of the month. The purpose of the ride is to gather so many cyclists that drivers can’t ignore them, buzz them or harass them. This both created a safe place for cycling and made a statement that the needs of cyclists is too big to ignore. In Santa Monica, Critical Mass met on the first Monday, so that it didn’t conflict with the larger event that starts in Los Angeles’ Koreatown on the 4th Friday.

In a way, Santa Monica was an odd fit for Critical Mass. Located next to Los Angeles, a sprawling megaopolis which was one of the most bike-unfriendly cities in the world at the time, Santa Monica was in the early steps of becoming a more bike-friendly place.

I know, I know…there are still a group of riders that meet on the last Friday of the month to go for a Critical Mass ride, but let’s face it Critical Mass really had its hay-day in Santa Monica in from 2006-2009.

But thanks to a police crackdown on the ride urged by the City Council and Mayors Richard Bloom (Dec. 2006-2007) and Herbert Katz (Dec. 2007-2008), the ride swelled as a fun, medium-risk way to make a statement that bicyclists deserve equal treatment on the road. With the foundation of Bikeside and Santa Monica Spoke, the advocacy that fueled Critical Mass was spent in more traditional advocacy.

Critical Mass was controversial at the time even among many of the most familiar faces to Santa Monica cyclists and Next readers. Frank Gruber wrote that he was “not sympathetic” to the ride in a column in the Santa Monica Lookout in November of 2007. Gruber noted that the city was certainly more sympathetic to the needs of cyclists than many cities in Southern California and urged cyclists to look for a different target.

The next month, Gary Kavanagh rode Santa Monica Critical Mass for the first time and found the over-policing of the ride a bit ridiculous. Kavanagh noted that it was the best behaved mass ride he had ridden. But that didn’t stop the SMPD for handing out tickets for such egregious “lack of forward facing lights” (the bicycle had lights) and “riding to far to the left” (which is not actually against the law.)

Even though I was not a Santa Monica resident, I rode Santa Monica Critical Mass twice. The first time was for work. I was shocked at the police presence. As the ride flowed out of the area around “the cannon” literally dozens of SMPD cars and motorcycles zoomed off behind them. Twice a motorcycle zoomed past me, in a bicycle lane, at well over 30 miles an hour placing me and every other cyclist he passed in danger. I saw a young woman ticketed for “turning left after the light turned red.” Later in the ride, the same woman was ticketed for “blocking traffic in a turn lane.”

In the first instance she started her turn when the light was yellow. In the second, she didn’t start her turn on a yellow light.

While the SMPD were freaking me out, the reaction from people on the street was different. Children cheered from their lawns. Restaurant goers high fived as we zipped past. While I observed a teenager getting ticketed, a woman walked up and asked me what the cyclist had done. When I explained, the cyclist was being ticketed for “leaving the bike lane” (not against the law) the woman was aghast.

The difference between the reaction of people and the police was striking.

After the ride, I was shaken. After three relatively positive Critical Mass experiences in the previous three months in Pasadena, Downtown Los Angeles and Venice (much of which rode harassment free in Santa Monica); I couldn’t believe how dangerous Santa Monica Critical Mass was. While I didn’t do anything dramatic such as vowing never to return…I didn’t go back to Santa Monica for a couple of months…and when I did it was because one of the Critical Mass organizers wanted me to try it again.

Meanwhile, Critical Mass was continuing to give the city a black eye. Television crews were showing up to interview cyclists shaken after being ticketed and harassed for either made-up or minor offenses. The Los Angeles Times covered the events and LAist mocked the police response. It got so bad that when the League of American Cyclists awarded the city a bronze ranking (it’s since rose to silver) an online petition asking the league to revoke the award garnered over 100 signatures.

And let’s not even discuss the time a group of cyclists legally walked their bicycles back and forth across an intersection every time the light turned red. Perfectly legal, it also created a huge traffic jam.

The next time I rode Critical Mass it was October of 2008, just a couple of months later.  The ride was smaller. The police less aggressive. It wasn’t summer anymore and things were more mellow…although the most contentious masses were in November and December of the previous year.  I did see a rider get a ticket for “messing up traffic.” I never followed up with him, but I have to assume that one was tossed by a judge, just as the two tickets given to the unfortunate young woman in August were.

Today Santa Monica Next remembers Critical Mass. While the ride is still going in a smaller way, it will be remembered by many of the city’s residents, friends, visitors and the riders themselves for the controversial and aggressive advocacy from a couple of years ago. Below are some of the many great pictures from the heyday of the Mass.

If you have any thoughts about Critical Mass in Santa Monica, please leave them in the comments section below.