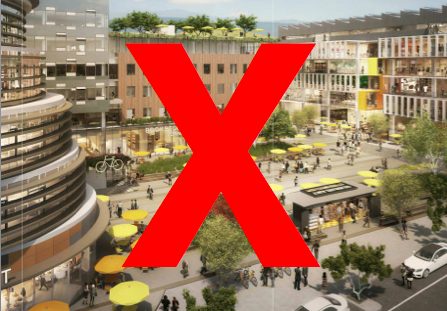 About seven years after negotiations began for a mixed commercial and residential project to replace the abandoned Papermate factory in Santa Monica’s former industrial corridor, it’s back to the drawing board.

Tuesday’s vote comes after a coalition of anti-development activists circulated a referendum petition calling for the reversal of the Council’s 4-3 vote in February to approve the project.

Because the opposition collected at least 6,500 valid signatures — roughly 10 percent of the registered voters in Santa Monica — the City Council was required to reverse its decision or place the matter before the voters, either in a special election or in November. (Editor’s note: The original post said that 6,100 signatures were required. The threshold is actually just over 6,500 signatures. JI)

Councilmember Gleam Davis — one of the four council members who originally approved the project in February — reversed her vote Tuesday.

The three council members who originally voted against the project — Councilmembers Tony Vazquez, Kevin McKeown and Ted Winterer — joined Davis in voting to rescind the project, with its roughly 300,000 square feet of proposed commercial space and 427 residential units.

The decision also throws into question the future the $32.2 million in community benefits for schools, parks and public streets the developer agreed to pay over the next 55 years as part of the now-defunct development agreement.