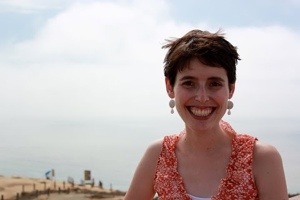 When I first met Lindsey Miller, she was applying for a new position writing about Santa Monica for Streetsblog Los Angeles. I googled her beforehand, and found out that the bright, energetic, and intelligent young woman was also sick. Very sick. She even had a website covering her ongoing battle with cancer. We ended up hiring Gary Kavanagh for the position, but Lindsey became part of our “bullpen,” freelancing for us and eventually joining the Santa Monica Next team.

This morning, Lindsey Miller’s battle with cancer ended. She was 28 years old.

Lindsey was a fighter, and she was surrounded by family, friends, and a loving boyfriend who fought with her. I guess I should say, “loving husband.” Lindsey and Jeff Cohen were married earlier this week.

For two years I watched her fight from the sidelines, wanting her to know I had her back and not wanting to intrude on the most personal of battles. We never talked about her illness, although I could follow the progress on I am a Liver. Streetsblog and Santa Monica Next were places she could write as a professional journalist and I respected that.

There’s a lot more I can say. I’m staring at her press credentials that came in the mail last week as I write this, but let’s just leave it at this. Lindsey was a wonderful woman and a great writer. We’ll miss her both as a person and a professional.