Home Housing SaMo Gets Its First In-Depth Look at Koolhaas Project for 4th/5th and... 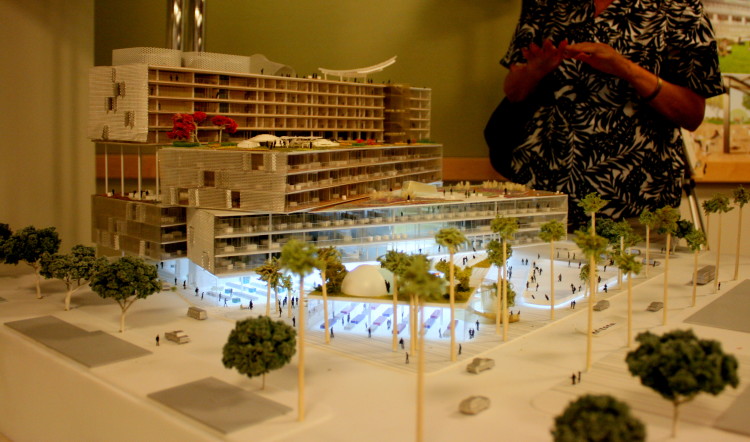 It has been seven years since the City began buying up parcels to piece together the 2.5 acre plot of prime real estate in Downtown Santa Monica that it hopes to transform into a new community hub and on Thursday night, residents got their first in-depth look at what that hub could look like.

“We believe the success of this project is really intricately linked to how it’s embraced by Santa Monica,” said John Warfel, the principal for Metropolitan Pacific Capital (MPC).

Warfel, along with Koolhaas and his team, were selected by the City Council in December over two other teams to undertake the project. OMA and MPC have also joined forces with OLIN, the landscape architecture firm behind the J. Paul Getty Center, and Biederman Redevelopment Ventures to oversee the design and programming of the 56,500 square feet of public open space proposed for the project.

“If we do our job right, the Plaza will become a public center for Downtown,” Warfel told the dozens of people who filled the Main Branch Library’s multi-purpose room Thursday for the presentation.

Citing the twin influences of the turn-of-the-century Arcadia Bath House, which typified Santa Monica’s indoor-outdoor lifestyle, and the Hanging Gardens of Babylon, a “monument to the earth,” OMA designed a complex of “cascading” blocks that rise like a giant set of “stairs to the sky,” as OMA architect Shohei Shigematsu told the crowd Thursday.

“We believe this project will be the blueprint for how commercial development and public space can be integrated,” he said.

At the behest of the City Council, Warfel and his team also studied a version of the project that would be within the 84-foot height limit prescribed by the current zoning laws in the city.

Building height has become a political flashpoint in Santa Monica after several developers proposed hotel projects along Ocean Avenue in Downtown Santa Monica that would range from 195 feet to more than 300 feet tall.

There would be a number of trade-offs, Warfel said, if they went with the shorter design, including the loss of of about half the public open space, reduction in affordable housing units, loss of parking spaces and “some, if not all, the biking amenities.” Warfel didn’t address whether the shorter building could support a rooftop gondola system, however.

Part of the issue, Warfel explained, was that a smaller project means reduces the resources available for the community benefits.

“The affordable housing is extremely expensive,” he said. “In order to afford the extensive open space and other public benefits, we need to have enough revenue from the project.”

During the Q&A portion, several members of the audience expressed their preference for the taller design.

“I think the taller version is far superior to the shorter version,” said one resident.

Another resident said, “Even though the height of the building may be an issue, I think the original presentation and the idea is one piece and whole and the second idea is a compromise and it looks like one.”

He added, “I am sold on the project. I wouldn’t want to see the compromised project replacing it.”

Still, others weren’t happy that the design would be outside the current zoning envelope.

[pullquote]
“I just want you guys to know that the community, from my understanding, has never vetted anything over 84 feet. And if this board or developer or architects make the mistake of believing that the community has vetted over the 84 feet, I think you will find yourselves in the same place Hines found itself recently,” – Armen Melkonians, founder of Residocracy
[/pullquote]

“I just want you guys to know that the community, from my understanding, has never vetted anything over 84 feet,” said Armen Melkonians, the founder of the anti-development group Residocracy.

“And if this board or developer or architects make the mistake of believing that the community has vetted over the 84 feet, I think you will find yourselves in the same place Hines found itself recently,” he said, referring to the recent referendum drive that led the City Council to overturn its approval of a mixed-use development in Santa Monica’s former industrial corridor.

The Plaza at Santa Monica project will go before the Council on June 10 for a “check-in” Warfel said before beginning an extensive round of public meetings.

Warfel directed those curious to find out more about the project to OMA’s website, where there are more images and a fact sheet.