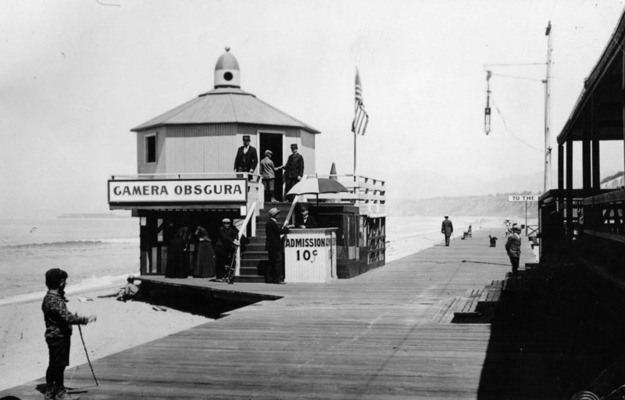 Often overlooked, Santa Monica’s Camera Obscura is a noteworthy relic of photographic history. Stepping into the attraction’s small, darkened space transports today’s media-saturated visitors to a time when the public viewed the projection of images on a screen as a unique and magical experience.

Santa Monica’s camera obscura dates to 1899 when it opened on the beach. For 10 cents the public could view live scenes of the surrounding coast projected onto a circular table in the room’s center.

In between yawns as you glance at screens from different digital devices, you are probably asking: “So what?”

In Victorian times, with photography and motion pictures in their infancy, camera obscuras created quite a sensation. Large-scale versions of these pinhole cameras were popular as tourist destinations. Santa Monica’s device is one of the few remaining from this historic period, with the only other one in California located in San Francisco.

Santa Monica’s camera obscura was transported up the bluffs to Palisades Park in the early 20th century, and then moved to its current location at 1450 Ocean Avenue in 1955, when it became part of the city’s newly opened Senior Recreation Center. The building was recently transformed into a community center offering many arts and crafts classes, but the camera obscura remains there as a separate attraction.

About a 100 people visit the camera obscura each week. Visitors need only drop off some form of identification to receive a key that unlocks a door into the past. You walk up a short flight of stairs, open the door, and enter a darkened room. In the room’s center there is a white platter centered under a small circular opening in the ceiling. The building has a periscope on its roof that contains a mirror that projects moving images from outside through a lens and onto the white platter.

You can operate a captain’s wheel to rotate the scope to see different scenes outside the building.  Trees obscure some views, but there are nice images that appear of the beach and along Ocean Avenue. You feel a little like a spy, looking in as the world outside passes by: People and cars moving along Ocean Avenue or people strolling along the sand and frolicking in the water. With no accompanying sound, and the scenes viewed in miniature on the concave focusing table, experiencing the camera obscura today is more eerie than sensational.

“They were kind of like Victorian webcams,” explains Naomi Okuyama, cultural affairs coordinator for Santa Monica, describing the device in terms that members of the digital age can understand.

Camera obscuras, she says, date back further than the 19th century, however. For centuries, scientists and artists explored ways to focus light from a real scene through a small opening and then project that image upon a darkened surface on the other side of the hole. This phenomenon was termed “camera obscura,” a Latin phrase for darkened room. The technology of the camera obscura laid the foundation for modern photography.

Okuyama says that the city has developed workshops and special programs that tie into the camera obscura. One workshop conducted by the Otis School of Design used the camera obscura to illustrate to students lessons about design and drawing. During the program, the camera obscura’s white platter was covered with transparent paper and students traced the outdoor scenes over it.

Historians have pointed out that many artists, including Johannes Vermeer, may have used camera obscuras to develop their art, an idea explored most recently in the documentary “Tim’s Vermeer.”

The city has become very creative with finding ways to incorporate the camera obscura into its arts and crafts classes. On May 24, the center will offer a one-day session on developing poetry inspired by the camera obscura.

“The camera obscura has a long history of people learning how to paint and how to look at things,” says Okuyama.