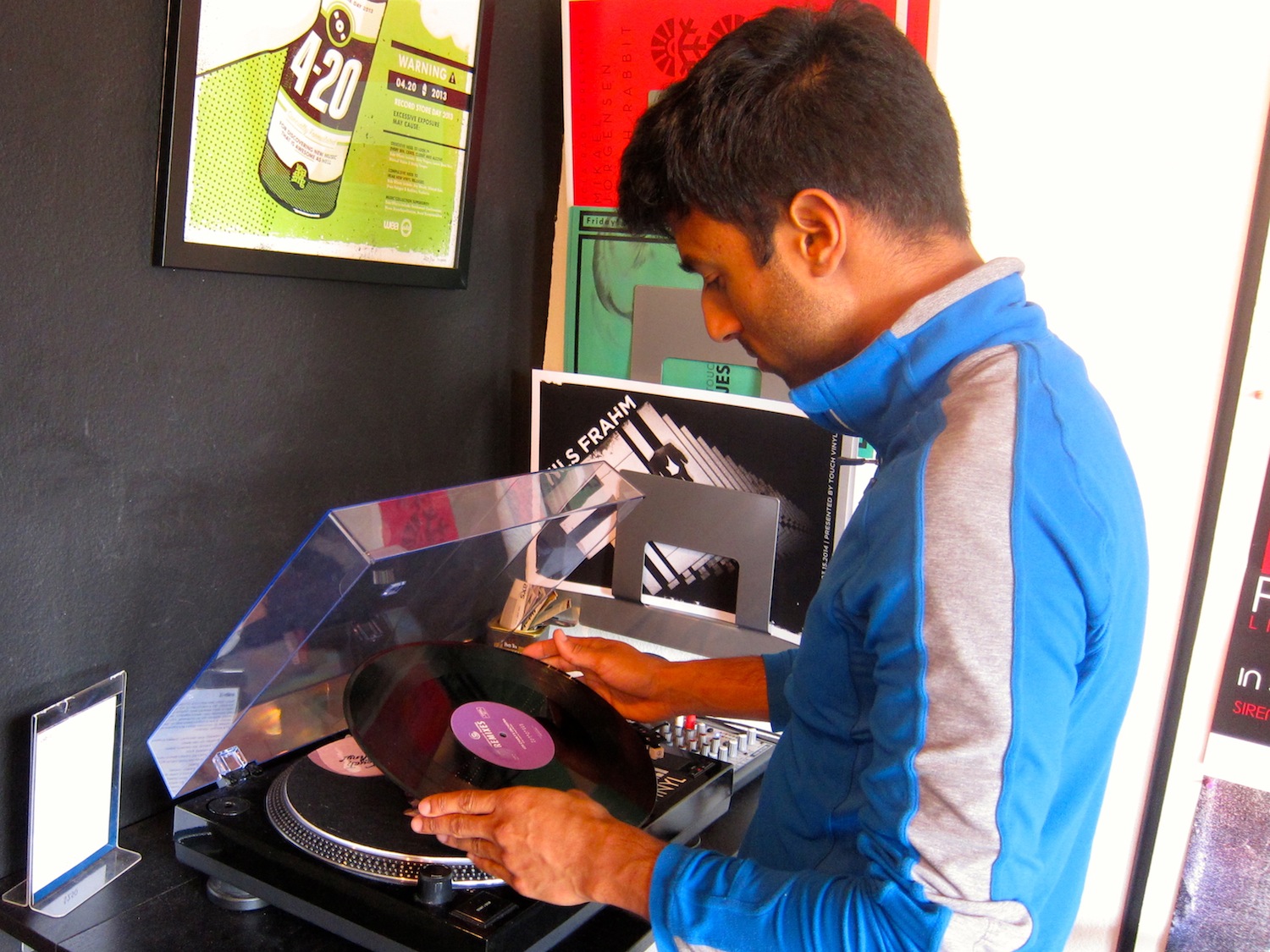 Last year was a disappointing one for the music industry. Digital downloads were off, as were album sales. CDs look like a dying format, with sales plummeting last year by 15 percent.

One segment of the music industry, however, was singing a happy tune: Records.

Yes, records. Sales of vinyl were up an astonishing 33 percent last year, according to Nielsen SoundScan, continuing an upward trend that began slowly a decade ago but has now picked up considerable pace.

This cheery development unfortunately comes too late for the several record stores that once dotted Santa Monica. Record outlets such as Benway and House of Records, both on Pico Boulevard, and Penny Lane, on the Third Street Promenade, have long been shuttered, leaving Santa Monica without a dedicated record store.

Several vinyl shops have recently opened in the Los Angeles area to tap into the vinyl renaissance, but almost all are located a far cry from Santa Monica in communities such as Silver Lake, Echo Park and Hollywood.

There are ways to get a vinyl fix on the Westside however, without venturing too far, starting with Angel City Books and Records in Santa Monica, which has stocked used records for the past five years. Other options in nearby West Los Angeles include the venerable Record Surplus on Santa Monica Boulevard near Centinela Avenue, and relative newcomer Touch Vinyl, on Sawtelle Boulevard south of Santa Monica Boulevard.

In addition, Urban Outfitters on the Third Street Promenade sells new vinyl, as does the Whole Foods Market on Lincoln Boulevard in Venice.

At Angel City Books, used records are stashed in wooden bins in the slim two-story space off Main Street, while used books are stacked in tall shelves along the walls.

Owner Rocco Ingala say that adding  vinyl to his store was critical. Otherwise, he says, “I wouldn’t be here.  The bookstore would not have survived without the extra income.”

Ingala opened the used bookshop 15 years ago, at first selling mostly on the Internet. Gradually he shifted his sales focus to the store. Adding used records to his business just made sense, he says. He mostly sells classic rock albums from the 60s and 70s.

“If I had wanted to open up a record store eight years ago, it would not have made it,” he says. “But it was the right time to bring records into the bookstore and divide it in half. Now the record collection is just as good and focused as the book collection.”

Those in the vinyl business attribute the rising interest to a number of factors, including the fact that many music listeners appreciate the warmer sound of vinyl and enjoy the album cover art.

Vinyl sales involve both used and new records. Many current artists are releasing their new music on vinyl, and there has been an increase in companies that press records to meet the demand.

Some attribute the record revival to the media attention associated with National Record Store Day, an annual April event that began in 2007 to draw attention to independent record shops. Last month’s event was hugely popular, and many artists made unique vinyl records for sale only at independent stores on that day.

“Vinyl never went anywhere really. It just kind of quieted down for a while,” says Sebastian Matthews of Touch Vinyl, a boutique shop that focuses mostly on new vinyl releases and in-house concerts and events.  The store is outfitted with comfy beanbag chairs and listening stations, and customers are invited to drop by and hang out.

Matthews says that the records they have for sale must be “curated” by the staff since they don’t have enough space to offer huge volume.

Space is not a problem at Record Surplus, a 4,000-square-foot warehouse that offers up to 50,000 mostly used albums for sale, most in the budget range of a few dollars. In business for almost 30 years, Record Surplus has more than 100,000 other records stored off site.

Longtime manager Neil Canter bought the store from the previous owner when the store’s former location on Pico Boulevard in West Los Angeles was up for sale and a new site was needed.

“My old boss said, ‘It’s time to move and it’s your problem,’” he says with a smile. Canter’s business model is built upon volume. He says he spends most of his day sorting through new stock that is brought into his store.

“It’s all about processing. You have to get stuff out every day,” Canter says. “If I’m not pricing records, I’m not making money.”

Record vendors say that higher rents in Santa Monica might prevent an independent shop from being able to survive in Santa Monica. Matthews points out that new record shops usually open in commercial areas that are in need of revitalization.

“Around the world you will notice that these record stores tend to be these little centers of culture that exist on a bad block before anything else,” he says. “So you get a record shop, then a coffee shop, then the restaurants and bars and you get a little gentrified community that pops up.”

He thinks that the next wave of record stores on the Westside might be better suited to an area like Venice before Santa Monica.

At Angel City Books, Ingala says that the business of selling used records and books is not geared for those looking to make a quick buck.

“You don’t generally go into this business thinking you are going to strike it rich,” he says. “It’s kind of a bohemian lifestyle. You are doing what you love.”