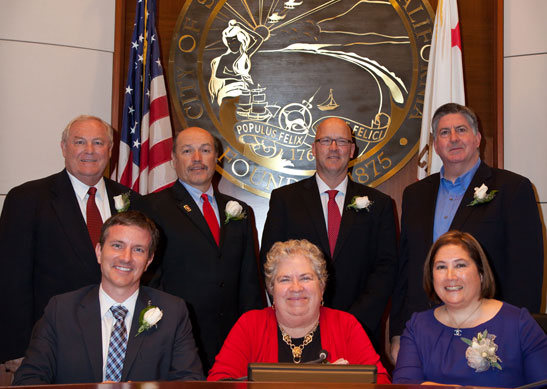 Would requiring voter approval of any project above a certain height be right for Santa Monica? Councilmember Kevin McKeown thinks so.

At Tuesday’s City Council meeting, McKeown, who is running for reelection this year, told the crowd that in a couple of weeks, he plans to propose the Council put an initiative on the November ballot that would “give voters direct control over our Ocean Avenue seaside skyline.”

At the moment, there are two pending major hotel redesign projects and one pending proposal to build a new hotel designed by Frank Gehry along Ocean Avenue. But, these projects have been the focus of some controversy because, as proposed, they range from 195 feet tall to about 300 feet tall, more than twice the city’s current height limit of 84-feet.

McKeown told Next that he has been in discussion with “both pro- and anti-development” activists and said he’s interested in “assuaging fears that the City Council might approve projects along our oceanfront skyline that could affect the look of our whole city.”

[pullquote align=right]
“I wouldn’t want to discourage someone who was contemplating a nine-story housing development that was 50 percent affordable housing.” – Councilmember Winterer
[/pullquote]

He floated the idea just before the City Council voted unanimously to move forward with a 148-foot design for a mixed-use project on City-owned land between 4th and 5th Street south of Arizona Avenue.

Still, with four votes needed to put the initiative on the ballot in November, it is unclear that it will make it off the floor.

Councilmember Ted Winterer was concerned about the unintended consequences of a measure that would require any development over a certain height to be approved by voters.

[pullquote align=left]
“Deciding land use policy by the ballot box is not a good approach.” – Mayor Pro Tempore O’Day
[/pullquote]

“I wouldn’t want to discourage someone who was contemplating a nine-story housing development that was 50 percent affordable housing,” he said. “I understand the motivation for floating the idea and I appreciate it but I want to know the particulars before I comment in any great depth.”

Mayor Pro Tempore Terry O’Day agreed that he would need more information before making a final decision, but that he was skeptical of the concept.

“Deciding land use policy by the ballot box is not a good approach,” he said. “We have had years of effort in developing a Downtown plan as part of our LUCE [Land Use and Circulation Element] and I’m not sure how the two work together.”

A similar measure, Proposition B or the Waterfront Height Limit Right to Vote Act, recently passed in San Francisco, requiring voter approval of any development over a certain height along a 7.5 mile stretch of coastline.

While proponents of Prop B used much of the same rhetoric McKeown employed Tuesday, its opponents warned that Prop B will actually make matters worse for the city’s residents, especially those being squeezed by rising rents.

In her article for The Atlantic’s CityLab, “How the Bay Area’s Waterfront Height Limit Could Be a Disaster for Waterfront Resiliency,” Kristen Capps writes,“[T]he bill did have a certain commonsensical logic to it: If voters can prevent luxury developers from building premium luxury towers in places where they don’t want these towers being built, then they can preserve San Francisco as the kind of city that attracted residents to it in the first place.”

[pullquote align=right]
“Leaving the decision about whether and what to build to voters—many of them home-owners whose investments rise with the restrictions on housing—promises a sharp new tool for constraining housing supply.”
[/pullquote]

“Leaving the decision about whether and what to build to voters—many of them home-owners whose investments rise with the restrictions on housing—promises a sharp new tool for constraining housing supply,” Capp writes.

McKeown’s comments Tuesday came in response to a small group of extreme anti-development activists who came out to resist the 4th/5th and Arizona project, ostensibly because it was too tall.

Many talked about the need for affordable housing (the project would have about 50 units, all below market rate rents), just not at that location. Instead, they called for a park at the site.

The contents of whatever ballot measure McKeown might propose aside, O’Day said that adding another initiative to the November ballot could mean voters simply get overwhelmed.

“It seems like everyone has ballot initiative fever in town,” he said. “We certainly have enough going before the voters in November as it is. It’s all quite confusing.”

There are currently two likely initiatives to be on the ballot in November and possibly another three if McKeown’s measure makes it. If voters reject all the measures because of the sheer number of them, it could be a major setback for affordable housing advocates in Santa Monica.

In July, the City Council will consider putting an increase to Santa Monica’s property transfer tax to the voters. The money from the increase would create a local source of funding for affordable housing development.