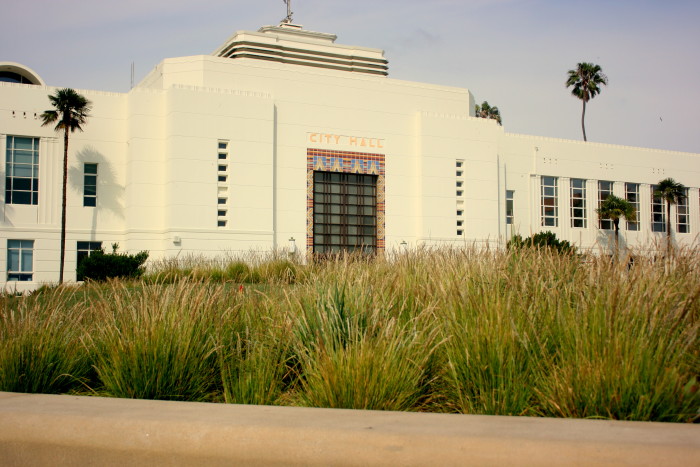 Follow our “Council Alert” series for updates on important upcoming City Council decisions and how you can make sure your voice is heard on issues that matter to you. – Jason

Last month, Santa Monica residents got their first substantive look at a design by world-famous architect Rem Koolhaas’ firm, OMA, that is slated for a 2.5-acre plot of City-owned land in Downtown Santa Monica.

The 148-foot building, inspired by the Hanging Gardens of Babylon, according to OMA architect Shohei Shigematsu, would replace two banks, several store fronts, and a surface parking lot between 4th and 5th Streets south of Arizona Avenue.

The new building would include 48 affordable housing units, a 225-room boutique (union) hotel, 162,857 square feet of office space, a 12,000 square-foot children’s museum, and 40,000 square feet of retail. The revamped site would also have 43,650 square feet of “uncovered, fully programmable public open space,” and would contribute about $6 million in annual revenue to the City.

However, with building height such a controversial issue, the developer has laid out options for an 84-foot tall version of the project and the Council Tuesday will give direction to the developer team how to move forward with the design. There are major trade-offs that come with lowering the project’s height.

From staff’s report to the Council:

The most significant differences, comparing the 84-foot building to the 148-foot building, include:
• 22,384 sq. ft. versus 43,650 sq. ft. of uncovered, fully programmable public open space;
• 24 versus 48 affordable residences;
• 430 versus 580 public parking spaces;
• Market-rate, formula retail tenants versus a local marketplace concept and more neighborhood-serving retail;
• No upper-level public views versus public views from the hotel lobby and adjacent open spaces; and
• A pocket park that serves the cultural institution versus the hotel.

While some have supported the height of the building, others have begun calling for the shorter project, or no project at all.

Update: Curbed L.A. posted a piece about the Koolhaas project that includes sliders comparing the 84-foot version with the 148-foot version.

Get involved: Do you like the proposed project? Let your representatives know. Send an email to council@smgov.net or to your individual Council members. Or, you can go to the meeting and speak on the item. The public hearing on this item will be sometime after 6:30 p.m. on Tuesday, June 10 at City Hall (1685 Main Street).

The Lincoln Neighborhood Corridor Plan, or The LiNC, could transform 1.25 miles of the formerly CalTrans-controlled stretch of Lincoln Boulevard south of the I-10 freeway into “a more pedestrian-friendly and local-serving neighborhood boulevard.”

What does that mean? That’s largely up to you.

On Tuesday, the Council will consider a contract with a consultant to hash out plans for the new, more livable Lincoln. Planning for the project won’t move forward until the start of the fiscal year on July 1, but the City planning department already has a website dedicated to it. City officials also said they are planning to engage locals in “smaller, personal conversations” as well as through social media.

Get involved: Stay tuned for updates through The LiNC’s website. If you have feedback or want to get updates, you can also email feedback to peter.james@smgov.net or francie.stefan@smgov.net.