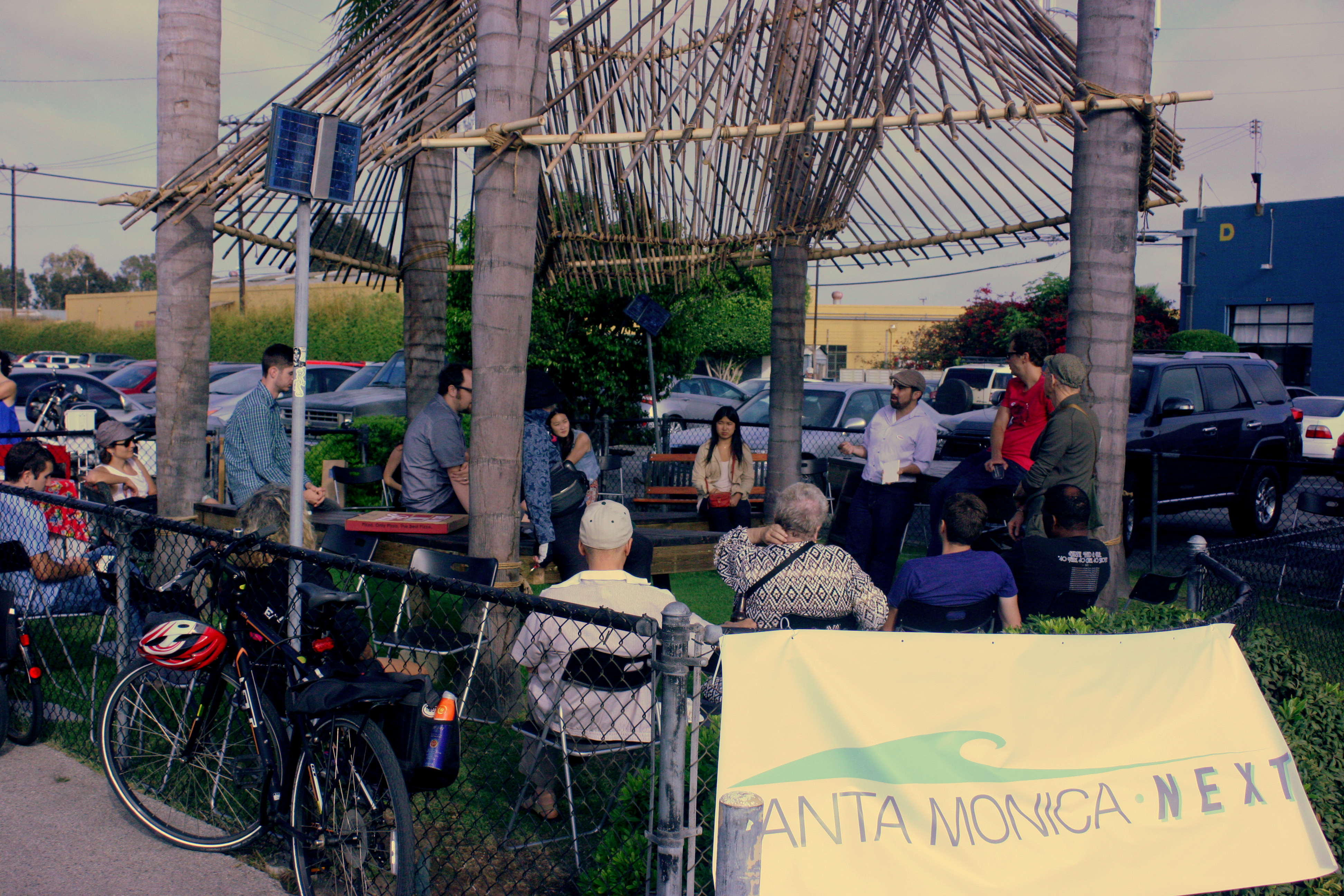 It is a short week this week, but there is still plenty to do. This week, help support Santa Monica in the National Bike Challenge by logging your bike miles and enjoying drinks with fellow riders, celebrate July 4 on Main Street with Santa Monica’s annual parade, or help stop malaria worldwide by taking a swim in a fancy dress.

But first, let’s recap this past weekend, which was a big one in the Streetsblog L.A. world. On Saturday, Santa Monica Next hosted its first of many Vote Local events. Thanks to our co-sponsors Santa Monica Spoke, railLA, and the Santa Monica Museum of Art (SMMoA), the event was a big success.

We had about 40 people turn out – including Mayor Pam O’Connor and State Assemblymember Richard Bloom – to enjoy free pizza and free art at our first Vote Local event.

Visitors gathered at the museum to experience the exhibits currently on display, including The Form of Color by Robert Swain. They also got an olfactory experience with “Sillage,” a work of art about the various smells of Los Angeles. I still smell vaguely of “Wilshire Area,” which was based partly on the fragrances of the La Brea Tar Pits.

We even got to take a very close look at the construction of the new Expo light rail station at Olympic Boulevard and 26th Street, at the northwest corner of Bergamot Station.

Our next event will be on July 17, so stay tuned for details.

On Sunday, Streetsblog L.A. – Next’s parent site – went to the Los Angeles Press Club’s annual award ceremony. From Streetsblog L.A.: “It was another banner night for Streetsblog Los Angeles at the L.A. Press Club Awards Dinner. In addition to our win as the 2013 ‘best blog’ award, Streetsblog team placed in three other categories, including two that were ‘medium-wide’ meaning that we were competing not just against online media but all media.”

Also, “[i]n May, Streetsblog L.A., LongBeachize, and Santa Monica Next attracted over 100,000 unique visitors and nearly 200,000 page views. To put that in perspective, there are 92,000 residents in the City of Santa Monica,” according to Streetsblog.

Join Santa Monica Spoke, Santa Monica Bike Center, and City staff at Pono Burger today for Handlebar Happy Hour. Through the end of September, team Bike Santa Monica is competing with other communities across the country to see who can collectively ride the most miles.

From SM Spoke: “The National Bike Challenge is a nationwide event uniting thousands of current bicyclists — and encouraging countless new riders. The goal is to unite 50k riders and log 30 million miles by September 30th! Current tally is 41k riders for 8,742,762! We can do it!”

Swing by Pono Burger on Monday to learn more, to log your miles, or just to enjoy a drink with your neighbors. There will be a raffle and a prize giveaway to those who have been diligently riding.

Head down to Main Street for Santa Monica’s 8th Annual Fourth of July Parade. Watch former – and current – elected officials, local residents, and others stream by on floats commemorating the holiday. This year’s theme is, “May the Fourth Be With You.”

The Church in Ocean Park is sponsoring a post-parade Fancy Dress Swim to help raise money to fight malaria globally.

From Fancy Dress Swim’s Facebook page: “This 4th of July you could be sashaying down Main Street in a fancy dress in the 8th Annual Santa Monica 4th of July Parade followed by a dip in the ocean.”

Don’t want to walk in the parade? Don your fancy dress and join in just for the swim after the parade at lifeguard station 25 (near parking lot five at the end of the wooden walkway).

“We’ve raised over $16,300 not including recent offline donations all linked swims combined so far. That includes the Mother’s Day Fancy Dress Swim and the (new this year) Fancy Dress Swim Vancouver BC. That’s for World Swim Against Malaria. Our first year or so starting in 2006 before we got hooked up with WSAM we raised over $2400 for other causes,” the Facebook page reads.

When: Friday, July 4 from 8:30 a.m. (for those who want to walk in the parade) to 10:30 a.m. (for the swim).
Where: The Santa Monica Civic Center, for the parade. Lifeguard Station 25 (at the end of the wooden walkway near parking lot five) for the swim.