Welcome to Monday. We have got a busy week ahead of us, including our first Vote Local event, a City Council meeting with at least two controversial items being discussed, and a major proposed change to one of the Big Blue Bus’ busiest lines.

The AOPA spent thousands to gather signatures for its ballot initiative, which, if approved by voters, would make it impossible for the City Council to make even the most minor changes at the 225-acre parcel of City-owned land without a popular vote.

The proposed City Council-sponsored ballot measure would give voters ultimate discretion over what the airport parcel is used for while still allowing the Council the power to make small changes, like prohibiting fuel sales at the airport or terminating leases with aviation-related businesses after they expire in 2015.

The proposal, similar to San Francisco’s Proposition B, is already being celebrated by local anti-development activists because they believe it will halt plans for three hotel projects that would range from 195 feet to about 300 feet tall.

In an email to his anti-development supporters Saturday, McKeown called on them to send emails and turn out to Tuesday’s meeting to support his proposal.

Can’t Make It?: Let your City Council representatives know what you think. Email McKeown at kevin@mckeown.net or contact all of the City Council at council@smgov.net.

Over the next few months, we will be hosting several mixers to introduce young Santa Monicans to each other and to the issues facing our city in fun, social settings.

Our first event, co-sponsored by Santa Monica Spoke, railLA, and the Santa Monica Museum of Art, is this Saturday at Bergamot Station.

We invite you to head to SMMoA to experience several of the exhibits on display, including Robert Swain’s “The Form of Color,” and Andrew Cannon’s “Chemical Computer.”

Throughout the day on Saturday, artist Brian Goeltzenleuchter will be creating an olfactory artwork at the museum by tailoring scents to specific zip codes. As Goeltzenleuchter creates new scents based on the information visitors give him about their neighborhoods, the artwork becomes a “scent-scape” of the Greater Los Angeles area.

Experience the museum from 4:30 to 6 p.m. and then join Santa Monica Next and our partners in People Park in Bergamot Station’s parking lot for light refreshments, a look at the construction of the new light rail station, and a brief discussion of plans for the area’s future and what you can do to get involved in shaping it. For more information, email jason@santamonicanext.org.

Can’t Make It?: Email jason@santamonicanext.org or follow Santa Monica Next for information about how you can get involved in our Vote Local campaign. 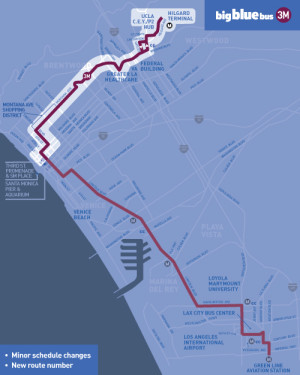 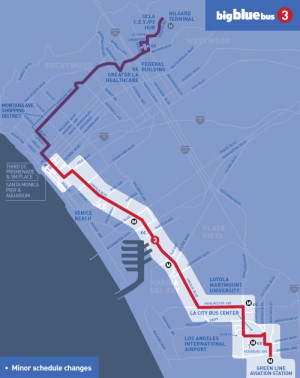 The Big Blue Bus will hold a community meeting Wednesday at the Main Branch library on a proposed plan to cut Route 3, which currently runs from Downtown Santa Monica to LAX via Lincoln Boulevard and UCLA via Montana Avenue, into two separate routes.

“Along with high ridership at several major stops, Route 3 is the longest line in the Big Blue Bus system in terms of travel time, at 95 minutes one way, almost double the average travel time for other Big Blue Bus lines,” officials said.

The plan to turn Route 3 into two separate routes, officials hope, will cut down on service delays experienced by buses traveling along the major – and sometimes traffic-choked – corridors.

Officials say that the majority of the route’s riders – about four-fifths – travel exclusively either on the southern portion via Lincoln to the Green Line station near LAX or the northern portion along Montana, to get to UCLA.

Wednesday’s meeting “will explain more about the impacts for approximately one-fifth of Route 3 customers who currently have a ‘one-seat’ ride through downtown Santa Monica,” officials said. “With the proposed changes, these customers will have to make a transfer downtown and pay an additional fare if they do not have a BBB Monthly Pass or a UCLA Flash Pass.”

The changes would go into effect starting August 24.

Can’t Make It?: See the proposals here and send feedback to bus-info@bigbluebus.com.