Home Uncategorized How Would You Design It Today?: Bob’s Market 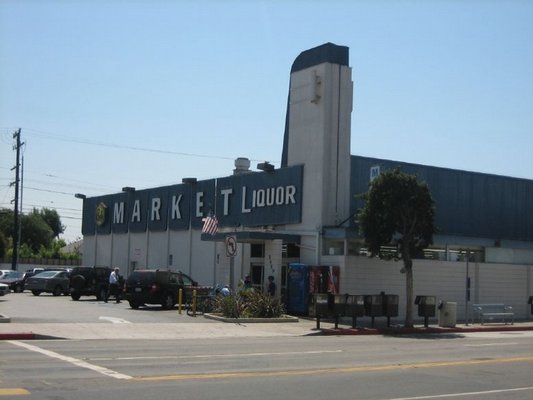 Bob’s Market is a local neighborhood grocery store in the heart of Santa Monica’s Ocean Park neighborhood. It sits at the corner of 17th Street and Ocean Park Boulevard, across the street from John Adams Middle School and only a few blocks away from Santa Monica college.

During the school year, students often gather at the bus stop in front of the store while waiting for the bus home.

Bob’s Market is a quintessential neighborhood institution and uniquely Santa Monican in its character.

“In spite of intense competition and pressure from large supermarkets and warehouse stores, we offer the personalized service, high quality produce and meats, an outstanding selection of fine wines, and a commitment to the community that only comes from a family owned business,” reads a statement on the store’s website from Bob Rosenbloom, who has owned the store since 1965.

While it has become a staple of Santa Monica, the way Bob’s Market is designed would never fly under today’s zoning standards.

The original building, built in 1941, was expanded in 1965. It is 12,065 square feet according to the County Assessor. Bob’s Market has about 30 parking spaces in its off-street surface parking lot. If Bob’s Market were built today, it wouldn’t be able to open with fewer than 41 dedicated parking spaces.

Markets like Bob’s Market are illegal given our current zoning code. With that in mind, how would you design Bob’s Market today?