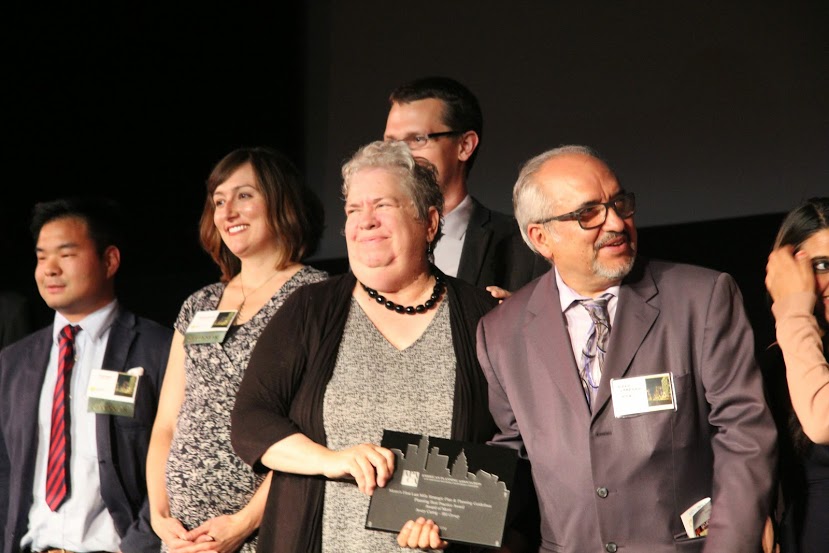 City officials took home three honors at the ceremony, hosted by the Los Angeles chapter of the APA and attended by urban planners from throughout the region, for their work in transforming Santa Monica into a more livable city.

Santa Monica was honored specifically for shaping an innovative plan for the Bergamot Area, creatively engaging residents around the redesign of Michigan Avenue, and creating two new parks in the heart of the city.

“Especially impressive is that our Santa Monica planners were recognized for their achievements in three areas: from planning for the Bergamot Area to innovative and inclusive public outreach for the Michigan Avenue Neighborhood Greenway to realization of a plan for Tongva Park/Ken Genser Square,” she said.

O’Connor, who represents Santa Monica and the Southbay on L.A. County Metro’s Board of Directors, was also recognized for her work promoting active transportation as part of the transit agency’s first/last mile strategy.

The Bergamot Area Plan, a comprehensive plan to transform the city’s formerly industrial quarter into a thriving neighborhood surrounding the future light rail station at Olympic Boulevard and 26th Street, was passed by the City Council in September 2013 after years of public engagement.

While there have been a few hiccups, overall the plan aims to transform the area around the future Expo station into a livable neighborhood by breaking up superblocks, replacing dilapidated industrial buildings with places to live and work, and transforming the area’s streets into multi-modal thoroughfares.

Per the APA: “The Plan incorporates inventive strategies that conserve and enhance the arts while introducing over 40 new allowable land uses, including residential, in an area that has been highly limited to industrial and manufacturing uses for most of the past 75 years.”

The City’s planners were also acknowledged for their creativity getting residents involved in the planning process for Santa Monica’s forthcoming Michigan Avenue Greenway (MANGo), a comprehensive plan to create a multi-modal corridor through the city’s Pico Neighborhood from the 26th Street Expo station to the beach.

During the planning phase, City planners held a street festival called Pop-Up MANGo, during which residents walked a four-block stretch of Michigan Avenue where they were able to see and give feedback on proposals for the street’s redesign.

From the APA: “Pop-Up MANGo attracted over 400 participants, and 73% of those that signed-in were neighborhood residents. Over 250 people provided direct feedback to the design team, critiquing and praising specific installations throughout the corridor both through the qualitative and quantitative survey tool that was utilized and by leaving individual comments at the various installation stations.”

The Santa Monica team was also acknowledged for their work in making the city’s two newest parks – Ken Genser Square and Tongva Park – a reality.

When the two parks – designed by James Corner Field Operations – opened last fall, the event rounded out years of coordination and planning. The project, which cost about $42 million, transformed the face of City Hall and a surface parking lot across the street into 6.2 acres of public open space.

“Santa Monica was recognized for having some of the best urban planning in the region,” APA Los Angeles Vice Director Juan Matute, a Santa Monica resident. Matute is also chair of the Board of Directors for Southern California Streets Initiative, which publishes Streetsblog Los Angeles and Santa Monica Next.

“We’re very fortunate to benefit from such vision and implementation,” he said.

Santa Monica’s strong showing qualifies the city to compete at the state level.