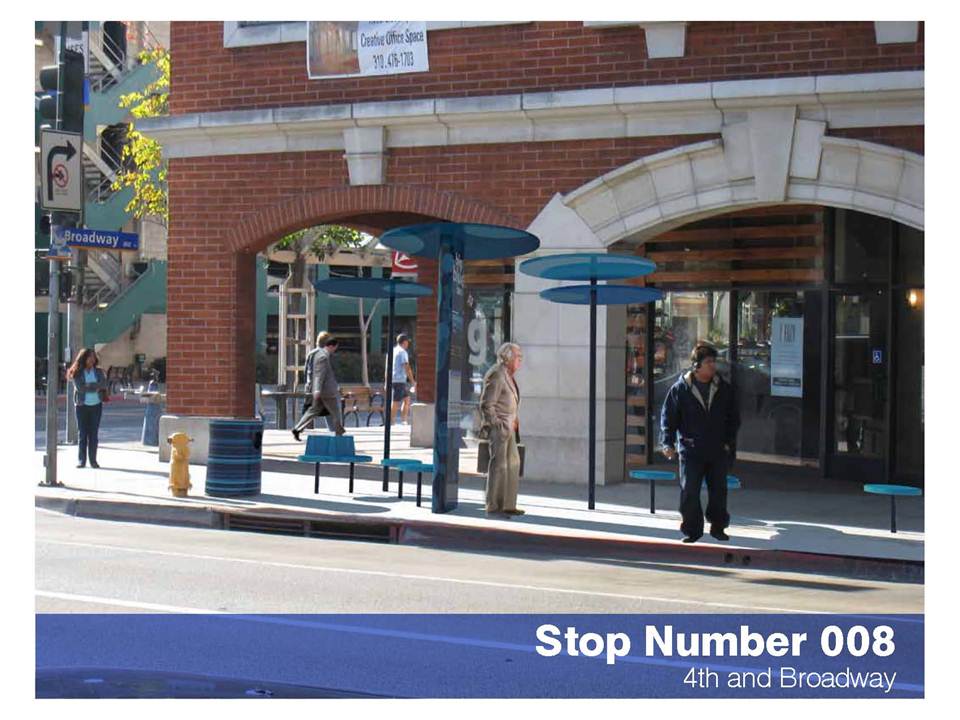 Big Blue Bus officials announced Wednesday that they would add seating and shading to some of the 40 new stops the agency recently installed as part of its $7 million overhaul of Santa Monica’s 300 bus stops.

The announcement comes after BBB received complaints that the new bus stops – which have, up to now, only been installed at locations where ridership levels are particularly low – lack adequate seating, shading, and are difficult for people with mobility issues to use.

“We have received numerous customer requests for additional seating, shade, and comfort and are working with the City’s architect, Public Works Department and project contractors to accommodate these requests as possible,” said BBB Director Ed King in an official statement Wednesday.

“While BBB and the City underwent an extensive public engagement process during the design phase for the Bus Stop Improvement Project, making adjustments once the design is built and installed based on customer experience is the mark of a dynamic public engagement effort,” he said, referring to the process, initiated in January 2008, the agency undertook to arrive at a final design for the new stops.

According to BBB officials, modifications to the recently installed stops will include more seating, better shading, “seating features allowing greater ease of use for riders requiring support to lift themselves up from a seated position, and when necessary, repositioning the seating such that the sightline for riders and drivers alike is not obstructed.”

Part of the issue is that the Big Blue Bus has begun upgrading stops starting with that usually see the lowest number of riders. Those “low volume” stops have the least amount of amenities, like seating and shade.

Over the next couple of months, the BBB will also install a few of the “high volume” configurations, which have the most number of amenities, so that customers can “see the full scope of the project installed,” King said.

While the improvement program will upgrade Big Blue Bus stops in Santa Monica, it won’t improve stops outside the city limits. It also does not address bus stops within Santa Monica that are served exclusively by other agencies, like Metro.

The bus stop improvement project has been more than a decade in the making. There have been community meetings, construction delays, multiple visits to City Council, but finally, after many years, the BBB began its much-needed modernization project, the majority of which is funded with federal dollars, at the end of March 2014.

While Santa Monica had been considering a city-wide overhaul of its bus stops since early 2000, the process didn’t really start moving forward until 2008, when then-BBB Director Stephanie Negriff presented the City Council with general options for a bus stop redesign program. (You can see the full discussion here. It is item 8-C)

The new stops will have real-time arrival displays, information about connections to other transit systems in the region, and LED lighting, but would also have to take into account the limited sidewalk space and not block businesses, staff told the Council.

BBB staff showed the Council several “off-the-shelf” style bus stops that could be tweaked to fit Santa Monica, but Councilmember Ken Genser, who served on the Council until 2010 when he died, opposed the idea of “picking out of a catalog.”

“We really need to have a design firm to work on an identity and a comprehensive plan,” he said.

Councilmember Kevin McKeown agreed with Genser, calling for the new bus stops to have “creative whimsy” that would make them “fun.” He said, “Utilitarian design just doesn’t do that for me.”

Councilmember Pam O’Connor said, “The functional characteristics of the shelter are important to be integrated into the quality of the design.” She added, “Most of the time, you do need some shade in Southern California.”

But Bloom was concerned that custom bus stops – as opposed to something off-the-shelf – would prolong an already drawn-out process.

Negriff said that BBB staff could return to the City Council in about six months.

After extensive outreach to the businesses around each bus stop, many of which were very concerned about the impact to the visibility of their storefronts from the streets, BBB riders, the general public, and other stakeholders, the matter went before the City Council again in March 2009.

The Council approved a contract with Lorcan O’Herlihy Architects to begin designing the new bus stops with the stakeholder feedback guiding direction.

The “modular” design allowed for each component of the new bus stops – the seating, the canopies, and the signage – to be installed separately. That, staff said, allows for maximum flexibility in the arrangement of the elements at each stop.

“What I can really appreciate this design is that, one of the challenges we’ve had with trying to implement this bus stop program is the variances in the street right-of-way and the space to actually put in the structural amenities,” Negriff told the Council.

“This design really lends itself to where there’s ample public pedestrian right-of-way and a strong demand for passenger uses, you can put up multiple pieces of infrastructure,” she said. “The more low-volume stops, where there might be less pedestrian space, you can maybe put one piece of furniture… but you still have a consistent design.”

The preliminary design was well-received in 2010.

“There is a great deal to like about what you’ve ended up with here,” said McKeown in 2010. McKeown applauded the fact the new bus stops wouldn’t have vertical walls, which he feared could be used for advertising further down the road.

But the designs did have plenty of shade, according to the renderings presented to City Council in 2010, a fact which O’Connor liked. And Bloom called the design elegant.

Fast forward two years to January 2012. The architect had finalized the designs and the City Council was considering bids from various construction firms to build the new stops.

But, with none of the bidders’ applications up to snuff, the Council rejected all of the proposals. Finally, in June 2013, the City Council awarded a construction contract and the project got rolling.

While the initial roll-out has been bumpy, King is optimistic that once the project is fully realized, it will be well received.

“We believe when customers see the full scope of the project installed, there will be a greater understanding of seat and canopy configurations at each stop based on the volume of ridership,” King said Wednesday. “We appreciate the customer feedback as it has contributed to improving the design.”