We hope you enjoyed your long weekend because it is time to jump right into all that’s coming up this week.

The Santa Monica City Council will make two major decisions Tuesday that will impact the future of the Airport and of affordable housing funding in the bayside city; the Santa Monica Pier kicks off its free summer concert series. And, throughout July, Santa Monica police will be cracking down on the bicyclist menace facing our city.

At its meeting Tuesday, the City Council will also consider placing a measure on the November ballot that, if approved by voters, will could help bring in as much as $10 million annually for affordable housing production.

Every time a property is sold in Santa Monica, the City currently collects $3 per every $1,000 of the property’s sale price. The ballot measure, as proposed, would raise the fee to $9 per $1,000 for properties over $1 million and would dedicate the funds raised by the increased fee to financing new affordable housing construction and preserving the affordable housing already built.

Santa Monica is struggling to maintain its commitment to economic diversity within its borders in recent years after the City saw its once-robust affordable housing funding dwindle from an average of $15 million a year to almost nothing. In 2012, along with about 400 other local municipalities, Santa Monica lost its redevelopment agency (RDA), which dedicated tens of millions of dollars in property taxes a year to reinvestment in the city.

When Sacramento killed redevelopment agencies throughout the state, Santa Monica lost about $15 million in annual funding for affordable housing.

A new dedicated local funding stream, while it wouldn’t entirely make up for the loss of redevelopment funds, would give Santa Monica a leg up when competing for federal and state dollars for financing new affordable housing, especially near transit.

When: Tuesday, July 10 at 5:30 p.m.
Where: City Hall 1685 Main St, Santa Monica, CA 90401
Get involved: If you can’t make it to the meeting, email the City Council to let them know what you think at council@smgov.net or find your Council members here.

To combat plans by national aviation interests to tie Santa Monica’s hands over the future of the City-owned airport, the City Council on Tuesday will finalize language for a measure it hopes to place November’s ballot.

The Aircraft Owners and Pilots Association (AOPA) has sponsored a measure that would prohibit the City Council from making even minor changes at the 227-acre airport. The AOPA measure would prevent plans by the Council to end the sale of leaded fuel at the airport and to let leases with aviation-related businesses expire in 2015.

In response, the City Council wants a competing ballot measure that would put the final decision over the future use of the airport land in the hands of the voters while maintaining the Council’s authority to take steps toward closing the airport.

When: Tuesday, July 10 at 5:30 p.m.
Where: City Hall 1685 Main St, Santa Monica, CA 90401
Get involved: If you can’t make it to the meeting, email the City Council to let them know what you think at council@smgov.net or find your Council members here. 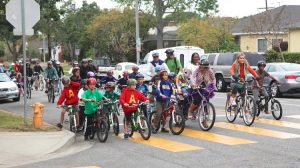 On July 4, the Santa Monica Police Department announced that, for the rest of the month, police officers would be cracking down on bicyclists not following the rules of the road as part of the Department’s focus on poor driving behaviors.

Each month, the SMPD picks bad driving habits to target, like tailgating or speeding and July is bicyclists’ turn to be in the hot seat.

According to the SMPD’s press release, “A majority of the collisions involving bicyclists have been determined that the other party was at fault. When a bicyclist has been at fault, the common causations have ranged from failure to stop at a traffic signal to unsafe speed.”

It is also illegal in Santa Monica for cyclists to ride on sidewalks, even where the road is narrow or otherwise hazardous.

“Lieutenant Marhaba of the Police Department’s Traffic Section reminds bicyclists to use the bicycle lane to travel safely to your destination,” the release reads.

It is important that all people share the road responsibly and safely, but this headline in the Santa Monica Patch was a bit much: “Santa Monica PD to Look Out for Dangerous Cyclists in July.”

The Patch article is actually just a reprint of the SMPD press release, but with a much more inflammatory headline. Headlines like this one, however, are part of a trend of overstating the dangers cyclists pose to others, as discussed in this recent article on Medium.com.

From the Medium.com article: “I tense up when I see a cyclist approaching a stop sign without slowing all the way down, but I tense up a lot more when a car does the same. And I fantasize about a cop showing up and ticketing them both, so I can make it safely to work today.”

When: All of July
Where: Throughout the city

This week, the Santa Monica Pier will kick off a 30-year summer tradition: free concerts. The Twilight Concert Series starts this Thursday at 7 p.m.

Grab some friends, a picnic basket (you could even put food in it!), and a spot on the beach to enjoy KCRW DJ Marion Hodges and Cults with James Supercave for the inaugural concert of the 2014 summer season.

Every Thursday through September 11, the Pier will host free concerts by from artists like Cayucas, Charles Bradley, and OK Go. See the full 2014 lineup here.