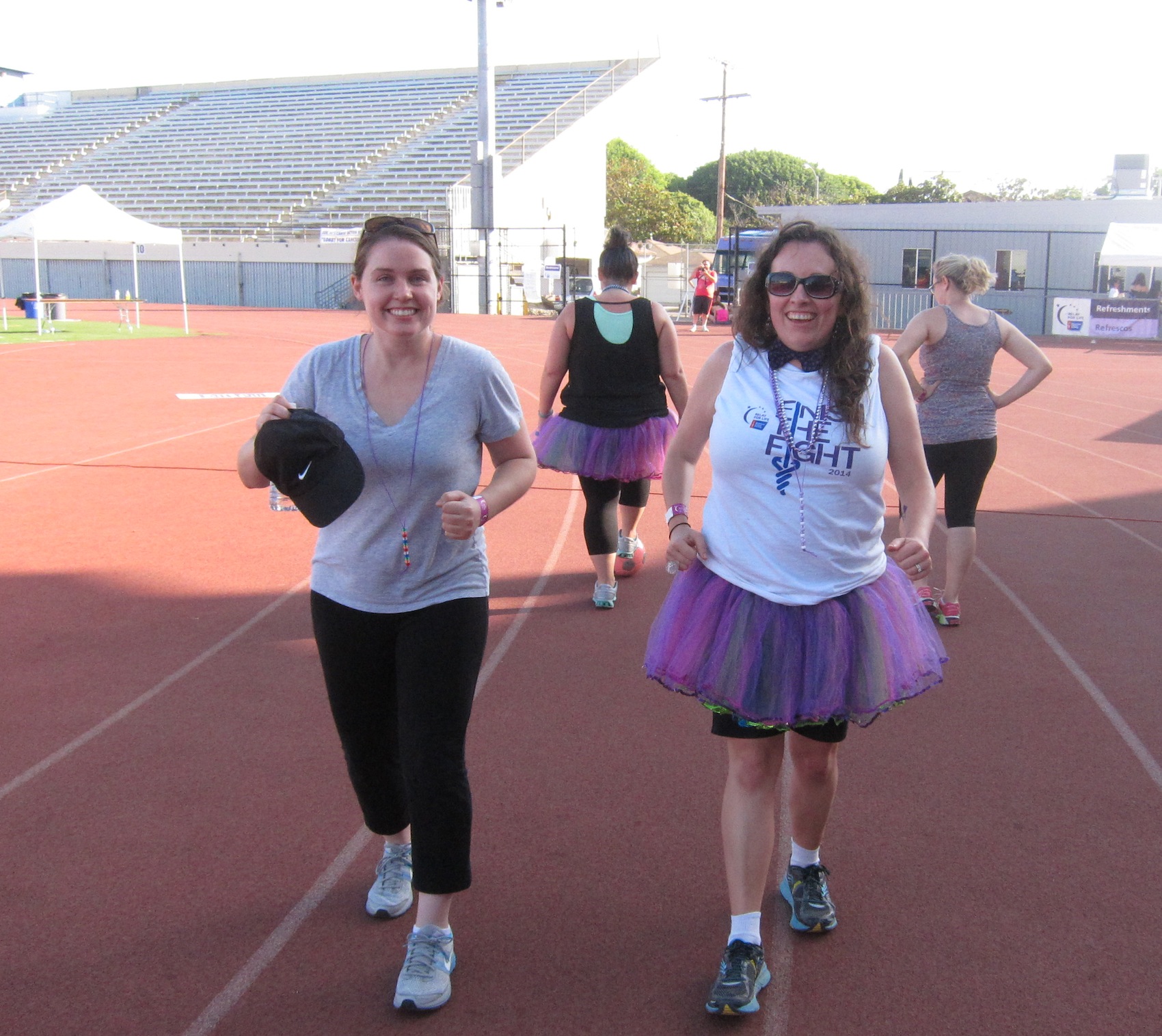 Celeste Miller’s approach to life after her cancer diagnosis nine years ago wasn’t what you might expect.

After hearing the news, she decided to finally learn how to swim. Then she took up rock climbing and began training for triathlons. Eventually she returned to UCLA to complete her master’s degree in public policy.

“As strange as it sounds, hearing those words are what allowed me to actually have a life,” Miller said, referring to her diagnosis. “I mean, it totally changed my life.”

On Saturday morning, after almost a decade of living with the disease, Miller had a chance to celebrate. She walked a special lap around the track at Santa Monica College with fellow cancer survivors as part of a unique fundraiser.

And then she walked some more, because this event was a fundraising marathon, scheduled for 24 hours, beginning at 10 a.m. on Saturday. Called Relay for Life, the extended fundraising walk consisted of several volunteer teams raising donations by camping out around Corsair Field. The goal was for at least one member of each team to continuously walk around the track for the entire time.

Organizers made sure there was a lot more to do than just walk around the track. There was continuous entertainment, including live music during the day and then nighttime movies and S’mores. At midnight, if volunteers were up for it, there was a lap around the track in pajamas.

Other activities included a gigantic inflatable slide and informal games of Frisbee football. Participants could pass the time by shopping for clothes and jewelry, grabbing a chair massage, or getting a haircut from students of Santa Monica College’s Cosmetology Department. All activities, of course, raised donations for the charity event’s total.

Jake Forsland, a recent college graduate from Santa Monica, is the event chair and participating for the third time.

“For our age group it’s kind of a fun and different thing for us,” he said. “It’s tough to get my friends to stay for twenty-four hours but those that do end up having a really good time.”

The number of walkers on the track varied throughout the day, with sometimes only a few and at other times several large groups making their way around the course, talking and laughing.

“It’s been great spending time with my friends, listening to music. I’m just enjoying myself,” said Katie Devine, part of Team Rockin’ Relay Rexes. At one point, Devine and her friend Jackie Morrison decided to walk around the track backwards for a little variety.

“When I first decided to join I thought twenty-four hours was going to drag on, but that hasn’t been the case at all,” Devine said. “It’s inspiring to see all these people out here supporting the same thing. I’m all for that.”

Organizers said that the Santa Monica event was much larger several years ago, and then almost fizzled out. But it’s been building up again in size in recent years.

This year’s event included the Saturday morning Survivor’s Lap that Miller completed. On Saturday night there was a Luminaria ceremony that featured the names of people who have been affected by cancer written on bags that were placed around the stadium and lit from the inside with glow sticks.

long haul. They had a tent and a covered sitting area next to it stocked with plenty of snacks and games to make it through the long event.

This year’s event had special meaning for Pena and her team since the company just lost a co-worker to cancer in the past two months.

“We had already signed up and decided to go to the event, but her passing gave us a much more personal motivation,” said Pena. “She had been a cancer survivor and then she relapsed. I think it’s given all of us a stronger sense of doing what we’re doing today.”

Pena said that her team had a strong turnout with 25 people participating. They had already raised more than $4,300 through donations and by selling raffle tickets for gift baskets.

For Miller, the slogan for this year’s event resonated with her own journey in fighting the disease.

“The phrase they use is ‘celebrate, remember and fight back.’ And you really do all these things,’ Miller said.