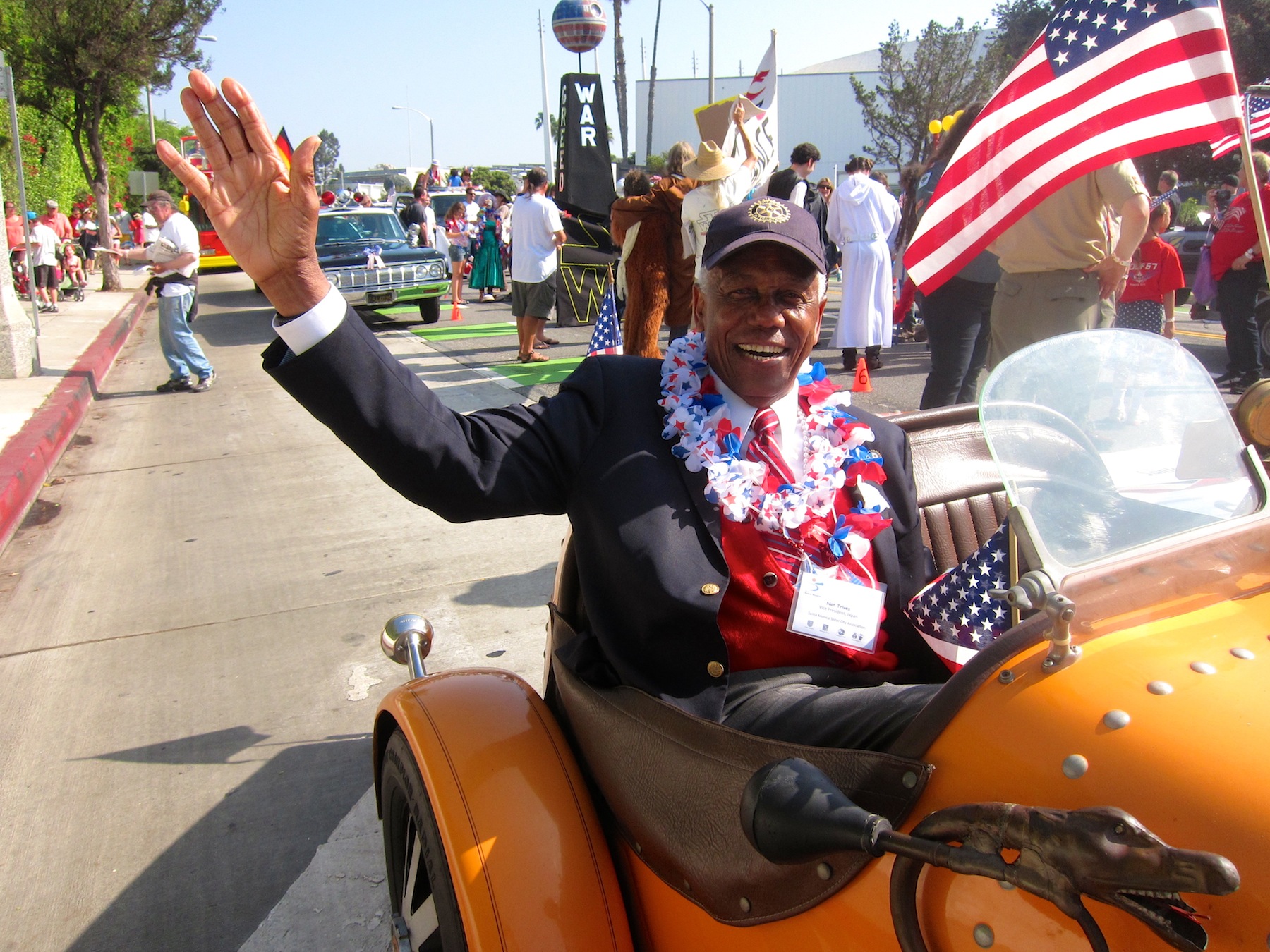 The Fourth of July holiday transformed Main Street into a slow-moving celebration of everything Santa Monica on Friday, from community groups to public safety officers, with some pageantry, live music and a little zaniness thrown in as well.

In some ways the eighth annual Fourth of July Parade, organized by the Ocean Park Association, could have been in any small town in America. There were vintage fire trucks, marching bands, waving politicians, smiling beauty pageant winners, and floats from several civic groups like the Kiwanis Club.

But the hundreds of people who lined the parade route were also treated to the spectacle of grown men dressed in pink evening gowns, flexible, muscle-bound acrobats from Santa Monica’s Muscle Beach, and a bizarre anti-war protest featuring a flower-wielding Chewbacca and a float with a blackened U.S. flag in the shape of a disco ball.

“That was a little strange, and slightly scary to the children,” said Margaret Valler, a local resident, of the anti-war protest. She was watching the parade along with her two small children. “But whatever, it’s all in good fun. It’s all America,” she added.

At least the anti-war protest entry, from the Rebel Alliance, was in keeping with the parade’s Star Wars theme of “May the Fourth be with you.”

Even more strange was that the protest float was quickly followed by two Santa Monica police cars, sirens blaring. The cars were not in pursuit. This was just the Police Department’s parade entry.

The OPA revived the city’s parade after it had become dormant. Judging by Friday’s event, it’s now back stronger than ever. It began around 9:30 a.m. chugging south along Main Street from Pico Boulevard to Ocean Park Boulevard. The entire procession took about 75 minutes to complete the route. Highlights included several floats with live music, a Wells Fargo stagecoach, and lots of high-energy folks smiling, waving and tossing out free candy.

Santa Monica’s local chapter of the Los Angeles County Bicycle Coalition, Santa Monica Spoke, made a strong showing for active transportation in the parade. Local advocacy group, Airport2Park, marched along with banner in hand, calling for the 227-acre City-owned airport to be converted into a park starting next year.

“Thankfully, I’m not walking it. I’ll be in a float so I can rest my feet,” Claudia Ethridge, also known as Miss Santa Monica, said before the parade got going. Miss Santa Monica is actually not from Santa Monica but a film student from San Diego. She was one of many pageant winners featured in the parade, including Mrs. California, Chantea McIntyre.

For many viewers along the route, the parade fostered a sense of community sometimes missing here, they said.

“It’s nice when LA feels like a small place, and this really helps make that happen,” said James Edwards, who says he comes every year with his family.

Making her first appearance in the Santa Monica parade was Juliana Payson, who was doing complicated acrobatics atop a Chevrolet truck as part of the Muscle Beach entry.

“I’m actually a Brit, so celebrating the Fourth of July is, you know, my acceptance into the free country,” she said with a laugh.

Also having fun, but for a serious cause, was Herley Jim Bowling, outfitted in a pink evening gown. Bowling and others from the Church in Ocean Park were participating in a unique fund-raiser to benefit the Against Malaria Foundation. The group buys anti-malaria nets that are distributed in African countries where malaria is still a major health problem.

About two dozen members of the group were sponsored to dress up, march in the parade, and then take a quick dip in the ocean in order to raise several hundred dollars for the cause.

Bowling said he got the idea for the fundraising event a few years ago when he researched fancy dress swims, a tradition in England and Ireland for many years.

“I’ve always loved fabric and dresses, so having an excuse to revel in those and raise funds at the same time, it’s a perfect fit,” Bowling said.