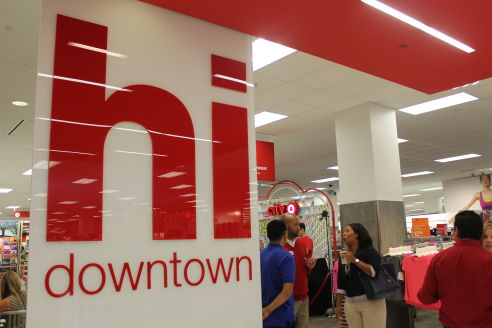 Should Santa Monica have a City Target? That was the question facing City officials in February 2001.

The retail giant had singled-out a location in the bayside city’s Downtown – on a parking lot behind what is now REI on 5th Street and Santa Monica Boulevard – for what was then a relatively new concept store: a City Target.

Smaller versions of the mid-priced department store, usually with less parking, City Targets today can be found in most major urban areas, including Chicago, Portland, Seattle, and San Francisco.

But in 2001, the concept was still new and the Target had selected Santa Monica as one of the first locations to build a store on the urban model.

Target officials proposed a 162,000-square-foot store on a lot that was then occupied by a 209-spot surface parking lot. Target proposed building 575 underground spots to replace the lost parking.

As Santa Monica’s Downtown became increasingly successful at the turn of the century, the bayside city had begun to lose some of its more affordable shopping options to rising rents on and around the Promenade.

In 2001, there was clearly a demand for affordable shopping. So, what happened?

As we explored in our piece on Trader Joe’s failed attempt to open a second store in Santa Monica, fear of insufficient parking and the possibility of increased traffic can often scuttle plans before they can even get off the ground. Such was the fate of City Target Santa Monica.

“‘It’s the traffic stupid,’ that’s the issue,” Councilmember Kevin McKeown bluntly told the crowd at the February 23, 2001 City Council meeting that decided the fate of the project.

“The traffic impacts would be unabsorbable,” he said, according to The Lookout’s coverage of the meeting. Late Councilmember Herb Katz echoed McKeown’s argument.

According to the L.A. Times coverage of the meeting, one resident shouted, “This ain’t New York!” to express opposition to the project.

Another opponent to the project said, “There’s no question we need a Target,” she said, “but not in downtown Santa Monica.”

Councilmembers Pam O’Connor and the late Ken Genser were the two on the dais who supported the project.

“The traffic isn’t going to get fixed,” Genser said at the meeting, according to The Lookout. “It’s gong to get worse (even) if we don’t build one more square foot.”

“In Santa Monica we are always looking for new models,” O’Connor said at the meeting. “We have gone out on a limb. Is it the right location? No other site would fit this…. The setting is appropriate. I think it would strengthen small businesses and draw businesses that want to build on that energy.”

While some opponents hoped Target would try find another location in town, O’Connor said, “I don’t think there will be another available location.”