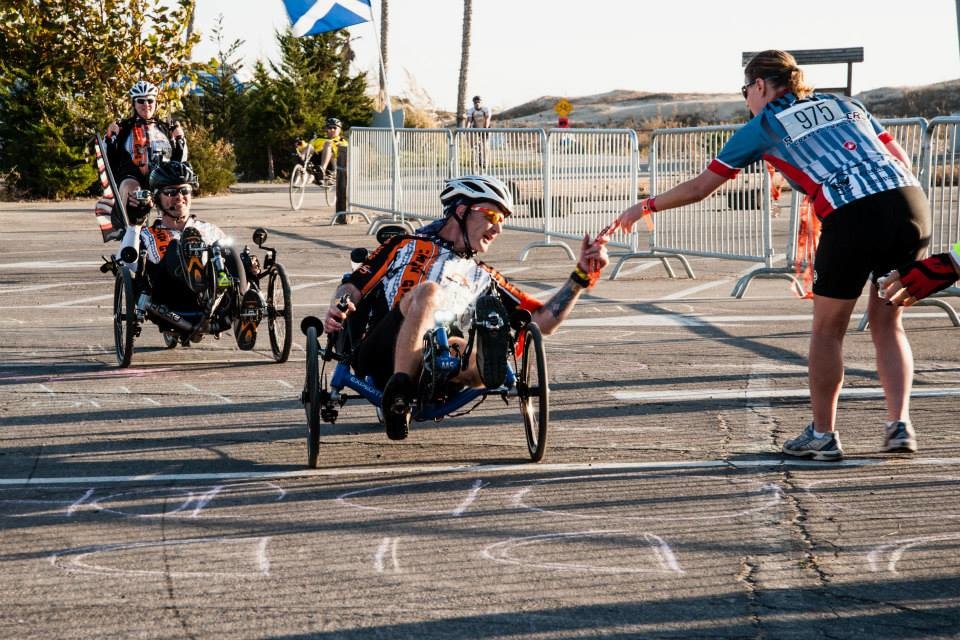 Tracie Garacochea had stayed active her whole life, but a diagnosis of Multiple Sclerosis six years ago posed a major challenge to her exercise routines. She had to stop yoga because she was losing her balance. Going to the gym was out because when her body heated up, her symptoms grew worse.

Every day now means trying to overcome a host of mental and bodily impairments.

“I have cognitive challenges, and difficulty breathing a times,” Garacochea said. “My left side is a little funky and sometimes it’s hard to walk. My hands are not that fabulous.”

When Garacochea heard about the annual coastal bike ride to benefit the Multiple Sclerosis Society two years ago, she decided to volunteer. Riding in the popular fundraiser was out of the question, she thought, until she spotted some riders using recumbent bikes.

Immediately after the event she went out and purchased her own recumbent bicycle and began training. Last year she went again to the event, and this time she rode.

Garacochea will be riding again this year and is especially excited because this is the first time the annual Bike MS Coastal Challenge will begin in Santa Monica. For Garacochea, a lifelong Santa Monica resident, having the ride start here makes the event that much sweeter.

“It’s my hometown. Can you tell I’m excited?” she asked.

Scheduled for Oct. 11 and 12, the ride will start at the Santa Monica Civic Center. The event will offer participants 30-, 65- or 100-mile route options on the first day, and 35- or 50-mile courses on the final day. Fundraising cyclists will end up in Ventura the first day and finish in Santa Barbara on day two. Participants will then be bused back to Santa Monica.

Riders will be treated to coastal and mountain scenery along the way as they raise money for the Multiple Sclerosis Society, the major support group for patients with MS, a debilitating disease of the central nervous system.

Bike MS is one of the top fundraising cycling series in the nation. Since its inception in 1980, MS Bike rides have raised more than $1 billion for the MS Society. This year there are more than a 100 rides scheduled across the country, including the one slated for Santa Monica.

Last year the local MS Bike event raised more than $1 million and drew more than 1,000 cyclists. This year many local bicycle groups, including Santa Monica Spoke, are gearing up to participate.

Lynne Thomas, director of sales and marketing for the Lobster restaurant in Santa Monica, first rode in the fundraiser seven years ago with a chef from the eatery. She also has a close friend with MS. She is riding again this year.

“It’s amazing,” she said. “Everyone is so welcoming and appreciative that everywhere you go you get all this encouragement. I remember the first year just being really humbled.”

Thomas has been reaching out to local businesses to get them involved in the event, asking if they will provide accommodations for participants, such as special menus at restaurants. Because it’s a large event, many people will be coming in from out of town to participate.

There are more than two million people in the U.S. living with the disease, with more than 100,000 located in Southern California. Although Garacochea, 54, wasn’t diagnosed until six years ago, she believes she showed symptoms even in her teens, which weren’t picked up by doctors.

Through the years she ran, did gymnastics and worked out in the gym. As her symptoms came on more strongly in recent years, it was more difficult to keep up her active lifestyle. But using her recumbent bike has been one way she can work out. She was so committed to bike riding that she got rid of a beloved convertible because she couldn’t store her bike in it and so she needed to buy another car.

Garacochea is focused on being ready for the demands of the long ride. In order to stay cool and keep her symptoms at bay, she wears a special ice vest to keep her body temperature down while riding.

“It’s really harder than I thought it would be. I didn’t realize how many hills there were,” she said of riding last year. “It was amazing and grueling. You finish it by will power.”