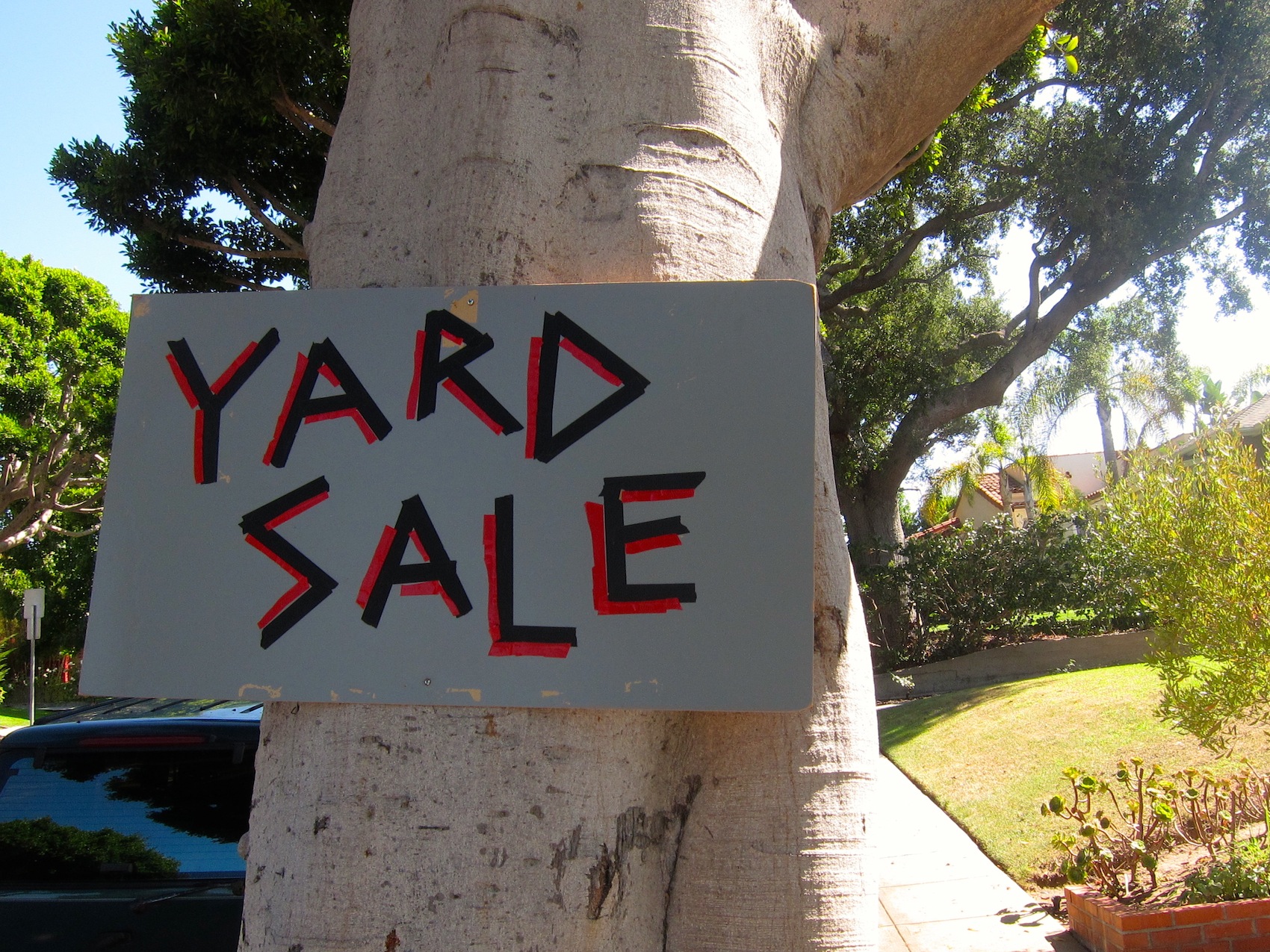 What are you looking for in life? How about an 8-track tape of ’70s rockers Credence Clearwater Revival? Perhaps some spike-heeled women’s shoes covered in metal studs? Or a vintage grocery scale?

This is not a random list but actual items spotted for sale Saturday as part of Santa Monica’s second annual citywide yard sale. Residents hauled an incredible variety of stuff out of storage and put it all up for sale on front lawns and sidewalks all over the city, hoping to find a buyer for things they no longer desired.

Unwanted items looking for a new home included old cell phones, broken-down computer printers, clothing, furniture, jewelry, dishes, and books. There was everything from appliances dating back decades of questionable collector value to a new dishwater, ready for use.

[pullquote align=left]
“It’s a big social thing. You are meeting a lot of people you haven’t met before, and hanging out with neighbors. So it’s a good reason to get out in the front yard.”
[/pullquote]

The people responsible for turning the city into a large swap meet were the folks at the Resource, Recovery and Recycling Division of the City’s Public Works Department. Their philosophy was that it is better to find new owners for discarded stuff rather than having it tossed as trash and filling up landfills.

Dozens of families signed up to participate, calling it a great way to de-clutter and an enjoyable community-building event.

“It’s about cleaning out and making a couple of dollars,” said Sunset Park resident Kate Schlesinger, who usually holds a yard sale once a year on her own anyway. “But it’s nice to meet all these people. I’ve just met neighbors across the street that I’ve never met before.”

She was selling everything from jewelry and books to Christmas ornaments and clothes.

A few blocks away Ed Moosbrugger and his wife Danielle were selling items ranging from vintage Wizard of Oz dolls to a skylight once used in a Frank Lloyd Wright house.

“It’s a big social thing,” he said. “You are meeting a lot of people you haven’t met before, and hanging out with neighbors. So it’s a good reason to get out in the front yard.”

At a sale nearby, Abtin Neiman spotted a used child seat carrier on wheels used for airport travel.

“How about five dollars?” he asked the homeowner.

“That thing is really expensive,” the man replied. Neiman said it looked as if it was missing a piece, which was confirmed by the homeowner’s wife.

“You can have it,” she told Neiman.

Neiman said he usually goes out Saturday mornings to yard sales looking for electronics that he often resells online, but he also looks for items that might be useful for his family, including the car-seat carrier. He said he would try and fix it. Of course, since it was free, it was hard to beat the price.

While Saturday’s event was scheduled to begin at 8 a.m., residents who had their address listed on the City’s Public Works web page for the citywide sale said they were approached by eager buyers well before that, even days before. One woman said a man rang her doorbell two nights before the sale asking to see what she had to sell, which she said was “creepy.”

The City posted official yard sale signs for those who had pre-registered, but others made their own homemade notices and posted them on trees and street sign poles. The city also listed local donation places where residents could take items that didn’t sell during the day.

If the City goes ahead with the event next year, resident Patti Miller had a suggestion.

“A garage sale has to be the first Saturday of the month,” she said. She said that the beginning of the month is when people have the most money to spend and garage sales always do better then.

Nonetheless, Miller was spending a pleasant morning visiting with neighbors while also eyeing an item her neighbor had put out for sale.

“She has a beautiful mirror and I thought it would look good in my house,” she said. “You never know what you are going to find. It’s serendipity.”