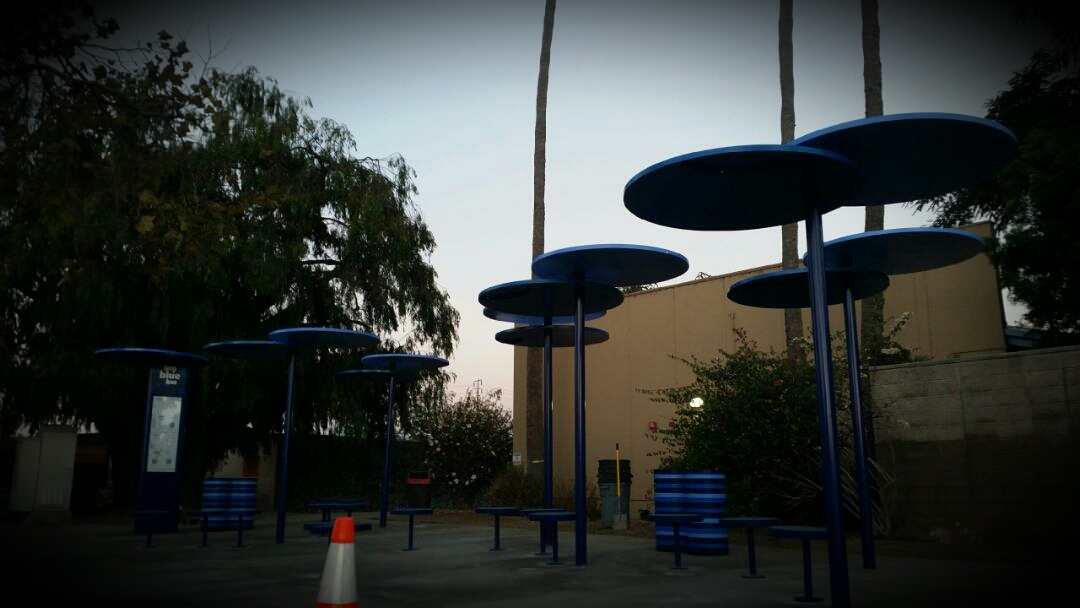 The first two of what Big Blue Bus (BBB) officials say will be more than 30 stops throughout the eights-square-mile city with real-time signage are now up and running on both sides of Pico Boulevard and 18th Street, stops which serve the agency’s busiest bus lines: line 7 and Rapid 7.

For much of the year, these stops are major hubs for Santa Monica College students, who ride the bus to school from throughout the L.A. region.

With thousands of students set to start attending classes for the fall semester on Tuesday, the 18th and Pico stops are the first to get “high-volume” treatment as part of the agency’s controversial $7 million, federally funded bus stop improvement project.

“At these stops, BBB has installed a larger sign unit for the display of route maps and real time signage which will show the predicted real-time arrival information for the next three buses, along with their route number and destination,” BBB officials said in a press release issued Friday morning.

Since the City Council first began discussing the bus stop redesign project in 2000, inclusion of real-time signage had been a priority.

Both Councilmembers Kevin McKeown and Pam O’Connor during the early discussions about the project had emphasized the importance of having reliable real-time information to encourage riders.

Both Council members argued that, with real-time arrival information, riders can more efficient travel plans and not get discouraged by waiting for long times at stops.

Since the first discussions took place, however, technology has advanced such that real-time information is now also available on cell phones.

BBB officials said that the agency is currently in negotiations with NextBus, a website that aggregates transit agencies’ real-time bus and train arrival information, to include BBB data, thus making it accessible to commuters through their smartphones and computers. (Editor’s note: This article has been updated to include comments addressing the cost of real-time signage.)

“NextBus is a separate product from the real time units at designated bus stops. BBB has over 1,100 stops systemwide,” BBB’s Government and Community Relations Manager Suja Lowenthal told Next Friday.

As such, we strive to provide real time bus arrival information to our customers regardless of where they are in the service area,” she said. “NextBus will provide greater accuracy of information than the algorithm using scheduled time and vehicle locator data that the real time units display.”

Lowenthal said that BBB will also be making its real-time data to third-party mobile device app developers so that the information can be incorporated into other apps working with real time data from BBB.

“BBB opening up its data and being a part of the open data movement will ensure that the proprietary nature or cost of vendor developed information delivering products do not get in the way of access, timelines, and customer service,” Lowenthal said.

She said that such an approach is preferable to installing Ethernet-powered real-time signs at all of Santa Monica’s 300 bus stops, which she said would be cost-prohibitive for the agency.

Because of the high volume of riders who use the 18th and Pico stops, they have been received more seating and shade than the previous 50 stops BBB has redesigned up to now.

Before the 18th and Pico stops opened, the new bus stops had only been installed at locations where ridership levels are particularly low: fewer than 50 daily passenger boardings, according to officials.

However, the new designs – created by Lorcan O’Herlihy Architects – have caused a stir among some riders who have protested what they consider to be inadequate seating and shade.

In some places, the new stops replaced old ones that included only a metal pole and a triangle BBB sign. Those stops had neither shade nor seating before the redesign. But, in other locations, old benches, wide enough to seat two to three people, were removed in favor of smaller stools.

BBB officials recently announced that the agency would not be bringing back the old benches, but would look at the current seating design to address concerns over comfort and usability.

“BBB has already announced that in response to feedback from the community, the design of low volume stops will be modified where feasible to include shade structures, more accommodating seat design and placement of refuse bins so that sight lines are not blocked,” officials said in Friday’s statement.

“While the low volume stops were not originally intended to include shade structures, Public Works and BBB staff are reviewing locations to determine if a shade structure can fit in the sidewalk without obstructing local businesses and disrupting existing infrastructure,” they said.

BBB announced that they plan to open four more medium- to high-volume stops in September, including one at Lincoln and Pico, which serves Santa Monica High School. That stop, officials said, will also have real-time signage.