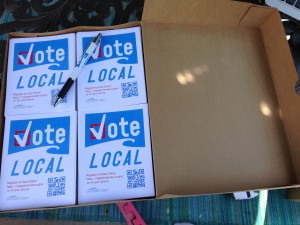 Summer is over and election season is in full swing. Register to vote – or update your information – by October 20 if you plan on having your voice heard this election season.

It may be a mid-term election, but there are some particularly important races happening at the local level on the Westside this year.

If you still haven’t decided how you will vote, you are in luck. Over the next couple of weeks, there are plenty of opportunities to get to know the candidates running for local office, including City Council, State Senate, School Board, Santa Monica College Board, and County Supervisor.

On Monday, September 29, the Santa Monica Junior Chamber (Jaycees) will host a City Council Town Hall, at which attendees can expect to hear from all 14 candidates in the hotly-contested race for three City Council seats.

The Town Hall, which will be held at TAG Gallery at Bergamot Station (2525 Michigan Ave. Santa Monica, CA 90404), is free, but guests are asked to reserve tickets at smjc.eventbrite.com. Guests who reserve tickets will be given first consideration for seating and will also be invited to submit a question.

“You can expect a wide variety of questions from young professionals who live, work, and socialize within the community,” said Brian Chase, vice president of Civic Affairs for the Jaycees.

“We’re a diverse group, representing a diverse community. It was important for us to use a town hall format so we wouldn’t need to limit the questions to any particular angle,” Chase said. “As a leadership organization for young professionals, civic engagement is an important component to what the Santa Monica Jaycees are all about.”

Officials said that they are currently trying to firm up the official start time of the forum.

The Chamber of Commerce recently chose Cross Campus as the location to launch its new civic engagement effort, aimed at getting Santa Monica’s burgeoning crop of young entrepreneurs, especially in the tech industry, involved in the upcoming election.

SMC Board of Trustees and SMMUSD Board of Education

Fresh off our Monday forum with the League of Women Voters of Santa Monica, the nonpartisan organization is at it again. By “it,” we mean promoting civic engagement through education.

“We are excited about the many opportunities we are giving Santa Monica’s voters to make the best choices they can come November 4,” said Ann K. Williams, president of Santa Monica’s branch of the League. “Our goal is to make sure our citizens are well-informed and engaged in civil dialogue.”

There are currently six candidates running for four spots on the College Board. The four incumbents are Louise Jaffe, Nancy Greenstein, Barry Snell, and Andrew Walzer. Local activist and newcomer Maria Loya is running to replace one of the four incumbents along with SMC Professor Dennis Frisch.

There are currently seven candidates running for four seats on the SMMUSD School Board, including incumbents Laurie Liberman. Ralph Mechur, and Oscar de la Torre.

SMC Professor and Santa Monicans for Renters’ Rights Co-Chair Richard Tahvildaran-Jesswein is making his first bid to sit on the School Board. Malibu resident Craig Foster is also seeking a seat on the Board, as are Patty Finer, a college admissions consultant, and Dhun May, a teacher.

Questions at the October 1 forum will be pre-selected and curated by event sponsors. Questions for the Town Hall on October 17 will be submitted by the audience and pre-screened by a review panel.

As with all League events, these are free and open to the public. For more information, email program@lwvsantamonica.org

The forums will be broadcast from 7 to 9 p.m. on October 20 and October 27 on cable channel 16. They will be taped for replay and placed on smvote.org.

If you haven’t already, check out the videos of our interviews with the two candidates running to replace L.A. County’s 3rd District Supervisor, Zev Yaroslavsky. After 20 years in office, Yaroslavsky is stepping down due to term limits.