Home Uncategorized Santa Monica’s Wellbeing Project: Rethinking the Role of the City in the... 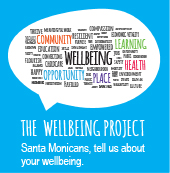 Overall, how satisfied are you with your life as a whole these days? Are you optimistic about the future? How do you usually get to work or school? How likely or unlikely do you think it is that your children would be able to live in Santa Monica when they are adults?

Maybe you are used to questions like this coming from your family physician or your psychologist, but what about from your local government?

These are from a survey currently being circulated by the City of Santa Monica as part of its ongoing Wellbeing Project, designed to “define, measure and improve wellbeing” in the bayside city.

With the $1 million awarded to Santa Monica in March 2013 from the Bloomberg Philanthropies’ Mayors Challenge, the bayside city is hoping to develop a new tool – the Wellbeing Index – that will change how city governments interact with their residents.

“The science says, somewhere between 40 and 60 percent of how you’re doing can be changed,” said Julie Rusk, Santa Monica’s assistant director of Community and Cultural Services.

“There are things about all of us that are personality, that are temperament. Some are optimistic, some are pessimistic. Those are fixed,” she said. “Part of [the Wellbeing Project] is trying to understand what are the things that are mutable so that people can do better.”

But, as Rusk points out, this isn’t about making people change; it’s about connecting them to the tools they need to improve their lives, if they choose to.

The Wellbeing Index, staff hopes, will be a dynamic tool that helps identify the places in people’s lives where they are most satisfied, where there is room for improvement, and what, if anything, the City can do about it.

According to Rusk and her team, it is a “multi-dimensional way of looking at how people are experiencing the world.”

It may sound like a nebulous concept, but the pieces that make up wellbeing are actually quite concrete. Traditional measures, like high school graduation and crime rates, will be included. But so will other measures gathered directly from the community about individual outlooks.

Do you know the names of your neighbors? Do you feel safe walking or biking in your neighborhood? Do you have the opportunities you need to learn new skills for a better job?

How healthy are you? Is there enough business diversity in the community to provide people with the economic opportunities they need to flourish?

While the City has information on many of these topics, there is no consolidated database that brings that information together to tell the whole story, she said.

The Wellbeing Index, once completed, will do just that. And, already, other cities are interested in the Index.

Pittsburgh, whose mayor is making headlines as a champion of shared streets, has expressed interest in the new tool, as have Denver, Louisville, Nashville, London, and Bristol, England. That’s exciting, Rusk said, because one of the goals of the Mayors Challenge is for the projects to be readily replicated in other cities.

Though the concept of creating a Wellbeing Index for local governments is novel, the idea of measuring wellbeing is not unheard of in Santa Monica.

With the City of Santa Monica spending tens of millions of dollars a year on programs and services for the city’s youth, the Report Card serves a very practical function as well.

“We have the youth budget, which outlines the sum of money that the City spends on programs to support youth and families. But youth wellbeing is about how those youth and families are doing,” Libby Carlson, the Wellbeing Project’s creative director. “We spent this much, but what is the impact?”

The Report Card provides data so that the City can see what is working and what isn’t when it comes to helping the local youth. The Wellbeing Index, however, is about the broader community, said Anita Chandra, director of RAND Justice, Infrastructure, and Environment.

She is on a panel of about 20 experts from various organizations and institutions, such as the RAND Corporation, Yale University, and the New Economics Foundation, that is working with Santa Monica on the project.

“[RAND brings] some of the background in wellbeing science, measurement, and how do you take data and research and turn it into community action,” Chandra said.

In order to make the Wellbeing Index different than other data sets, she said, first Santa Monica and its partners will make sure the measures selected are things that can be changed. Then, it will be placed into a platform that can be used by the general public. Finally, the information will be integrated into conversations with residents, business owners, and other community partners about how best to use it and what it means for daily life.

A New Way of Thinking About Cities

Santa Monica was one of five cities selected out of 300 as winners of the Bloomberg Philanthropies’ Mayors Challenge in March 2013.

Focusing on local government as a change-maker makes sense to Rusk. For one thing, she said, “When you poll people, it’s city government that they are most likely to still have some level of confidence in.”

Santa Monica wanted to come up with a way to measure the success of a city government that can be reproduced and used by other cities.

“Currently, cities have no holistic way to measure their success. Mayors on the ground are focused on quality of life and wellbeing issues, but still have to look at economic indicators (or measures of specific issues, such as obesity or crime) to see how they’re doing,” the Mayors Challenge site’s description of Santa Monica’s project reads.

“Santa Monica will create a sophisticated single metric focused on economic vitality, social relationships, health, education/care, and local environment – a way to measure wellbeing. This will enable the city to manage for better outcomes,” it reads.

For more information about the Mayors Challenge, visit http://mayorschallenge.bloomberg.org/. Click here to see the current results from the City’s survey.