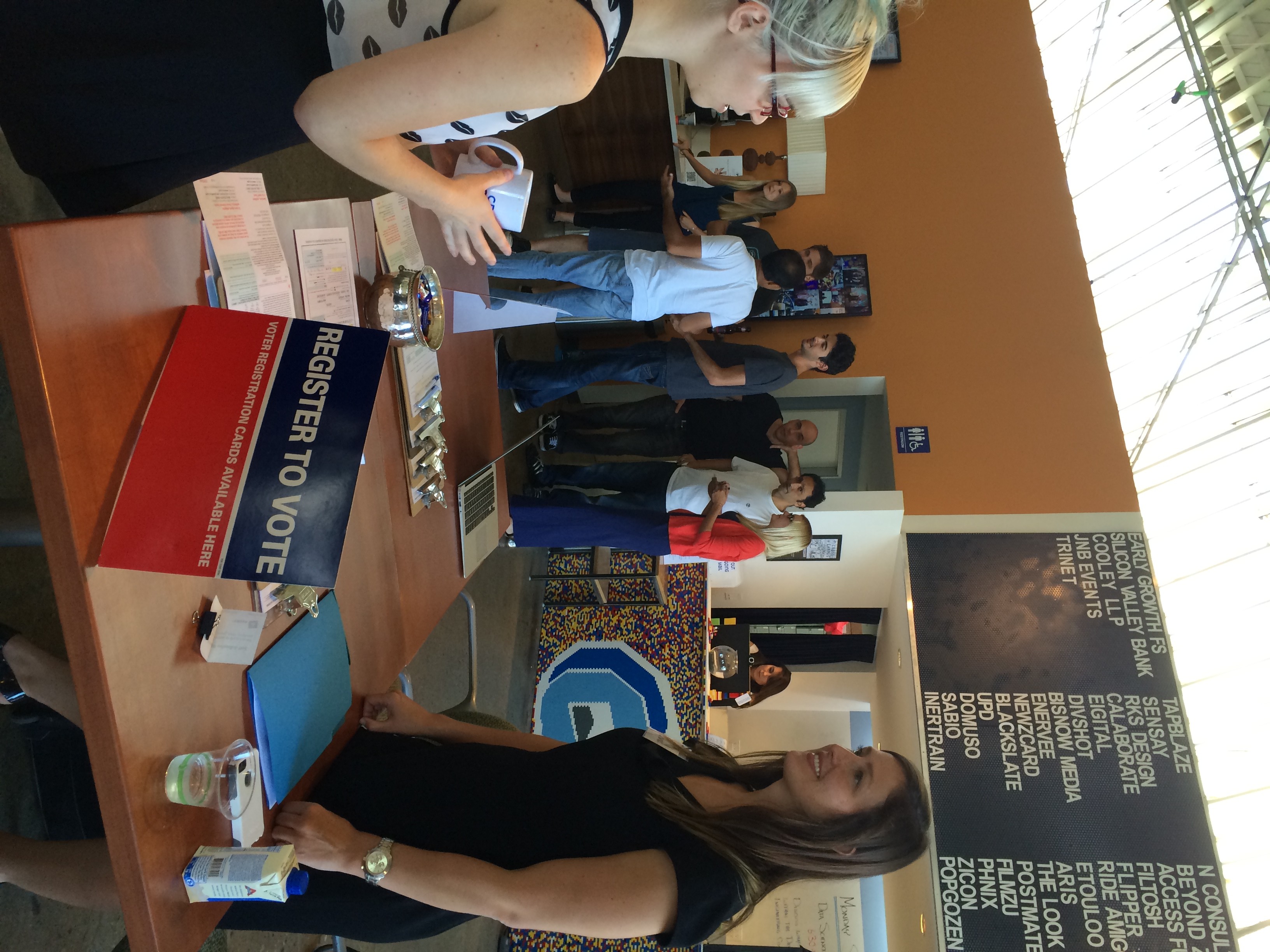 The Cross Campus building at 9th Street and Colorado Avenue is a refurbished industrial space, with the exposed ceiling beams and open floor plan of a small mid-century factory.

While the building is a testament to Santa Monica’s past as a manufacturing town, the work being done inside is redefining the future of the city as an incubator for burgeoning tech start-ups and other small businesses.

Where a half-century ago machinists calibrated tools to produce goods, now a crop of young entrepreneurs busy themselves crafting the technological tools to take us into a new era of information sharing and collaboration.

“We want you to be the future leaders of our community,” President of the Santa Monica Chamber of Commerce Laurel Rosen told the crowd of about 200 people gathered in Cross Campus Friday.

Cross Campus is one of several co-working spaces that are changing the definition of workplace. Individuals or companies pay to become members in order to have access to work space that they share with dozens of other people, creating an environment that fosters idea sharing and social working.

On Friday, the atmosphere felt less like an office and more like a social club as new members introduced themselves to their fellow Cross Campus members.

In recent years, Santa Monica has become home to a growing number of small start-ups, many of which start in shared work spaces like Cross Campus.

“About 40 percent of Los Angeles’ tech community is in Santa Monica,” Rosen announced to the crowd Friday. “We need you to be a part of the community. Help us shape the future.”

Some anti-development activists have been campaigning against the future development of homes and office space in Santa Monica. They have actively opposed policies that allow for moderate growth that would allow for new residents — and small businesses — to take root here, a trend that could get worse if it is unopposed.

In the face of a contentious election year — there are 14 candidate running for three seats — Rosen said, “the Chamber’s role is to provide the information necessary to make those important decisions.”

Friday’s event, which was also attended by Santa Monica Mayor Pam O’Connor, was the first in a series of the Chamber’s civic engagement initiative, aimed at encouraging participation among newer voters, especially those in the technology community.

As it will at future events, the Chamber had volunteers registering new voters (at least before the October 20 registration deadline) while Rosen reminded those present that, if they don’t speak for themselves at the ballot box on November 4, others will speak for them.

“There’s some risk for our future business leaders because the percentage of young voter [participation] is low,” she said.

Cross Campus CEO and Co-Founder Ronen Olshansky believes this is precisely the kind of thing that his company is about.

“Cross Campus is a community hub and event space,” he said, adding that collaboration and civic engagement are inherent to the Cross Campus model. That model, Olshansky said, is thriving.

Cross Campus is getting ready to open a location in Pasadena next year and is looking to open another in Downtown Los Angeles.

“The Westside is the most dynamic, but Downtown [Los Angeles] and Pasadena are up and coming,” Olshansky said. The Expo light rail, which is scheduled to begin running between from Downtown Santa Monica to Downtown Los Angeles by early 2016, will only make it better.

“Expo will make that trip to Downtown [Los Angeles] so much easier,” he said, especially since Santa Monica’s 5th Street Expo station will be walking distance from Cross Campus.

Pulakanam is working on an app called Cheers+, which he hopes will help businesses improve the quality of their relationships with their customer base, rather than simply increasing their number of customers.

“Living in Santa Monica is one of the best things that ever happened to me,” said Pulakanam, a former resident of Culver City.

Pollak, who said he’s looking forward taking the Expo, said one thing he likes about Santa Monica is its “healthy business climate.

“It makes it really nice place to live when you have an economy to sustain it,” he said.

But that could change and not necessarily for the better, Rosen said. “The people who are making decisions about your future are not in this room,” she said. Santa Monica “is going to change. We need to support good change.”