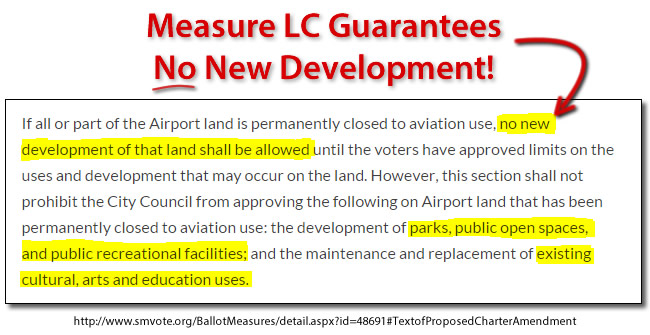 It’s safe to say that the 2014 election in Santa Monica has been about two issues: the question of how the city should grow and the future of the Santa Monica Airport. Efforts to pass a ballot Measure (Measure D) that would curtail the city’s ability to manage or shutter a portion of the airport without other successful ballot measures have tried to tie the two issues together.

The campaigns for Measure D and the competing Measure LC have become a test of local grassroots politics versus money. Funding from national aviation interests have flooded Santa Monica’s mailboxes while homeowners groups, environmental groups, neighborhood associations, have pushed back with door-to-door voter contact and some mailers of their own. *

Bur first, a brief history lesson. The City of Santa Monica has been trying to close the Santa Monica Airport, or at least a portion of the runway that makes it possible for the largest jets to land, for decades. An agreement with the federal government to operate the airport with the extended runway and with low rent expires next July. Whether or not the City can actually close that portion of the runway is an ongoing debate, but clearly the City will finally be able raise rents on space in the airport to market rates.

If passed, Measure D requires the City to receive voter approval before any changes can be made to the airport, including raising rents or restricting leaded fuel sales. Measure D was placed on the ballot after a signature gathering campaign which was funded by national aviation interests and was dogged by complaints that the gatherers lied or bullied residents to sign the sheets. The messaging in favor of Measure D argues that without Measure D, the City Council can close the airport and put in high rise apartments. Also…Aliens.

Measure LC was placed on the ballot with a rare unanimous vote of the City Council. LC requires a voter referendum before the city can develop any portion of the airport for residential or commercial use. Fourteen of the sixteen City Council candidates back Measure LC. There has been no mention of extraterrestrials in the campaign for LC. Maybe there should be.

Both measures will be on the November 4 ballot and require a majority vote to pass.

To try and get through some of the fumes generated by the Yes on D campaign, I spoke with four-term City Councilmember Kevin McKeown about the ballot measures, the politics of the airport and the 2014 election. McKeown is known as a supporter of slow-growth policies, yet he is a vocal supporter of Measure LC and opponent of Measure D.

Listen to the entire interview.

In fact, McKeown argues that Measure D has nothing to do with development. The text of Measure D doesn’t mention development, despite no-growth messaging being at the heart of the Measure D campaign. Ironically, it’s Measure LC that spells out restrictions on developing future land at the airport.

An advertisement about development from the Voters Decide Campaign

“Measure LC has something in it that says before any development beyond the uses that are there now to the airport can happen there has to be a concept plan that’s approved by the residents. Measure LC gives us better short-term control and gives residents that are concerned with over-development of the site better protection.”

There are many people who charge that efforts to close or change the land-use at the airport is a losing fight, one the city can’t afford to wage. The Federal Aviation Administration has fought the City in court, and national aviation interests are fighting at the ballot. However, McKeown sees the battle as one the City can’t afford not to fight.

“It looks like an aircraft carrier in a sea of homes,” he says of the airport’s location surrounded by residential neighborhoods. “Four years ago we had to close the runway to pave it. I had the South Coast Air Quality Management District come in and take measurements. Some air quality indices went down by factors of 12 to 17 in the vicinity.”

But while Measure D is being hammered by activists and on social media for running a deceptive campaign, their messaging, aided by at least half a million dollars from the national aviation lobby, is sticking. McKeown laments how fear of over-development is leading some to embrace Measure D’s messaging regardless of the real intent of the ballot measure.

“The supreme court has told us that in politics, money is free speech and that those that exercise their free speech in politics have the right to lie,” McKeown charges. “People who are very concerned about over-development in Santa Monica are being convinced…the better self-interest for Santa Monica is clearly to pass Measure LC.”

*Santa Monica Next has editorialized in favor of Measure LC and against Measure D.