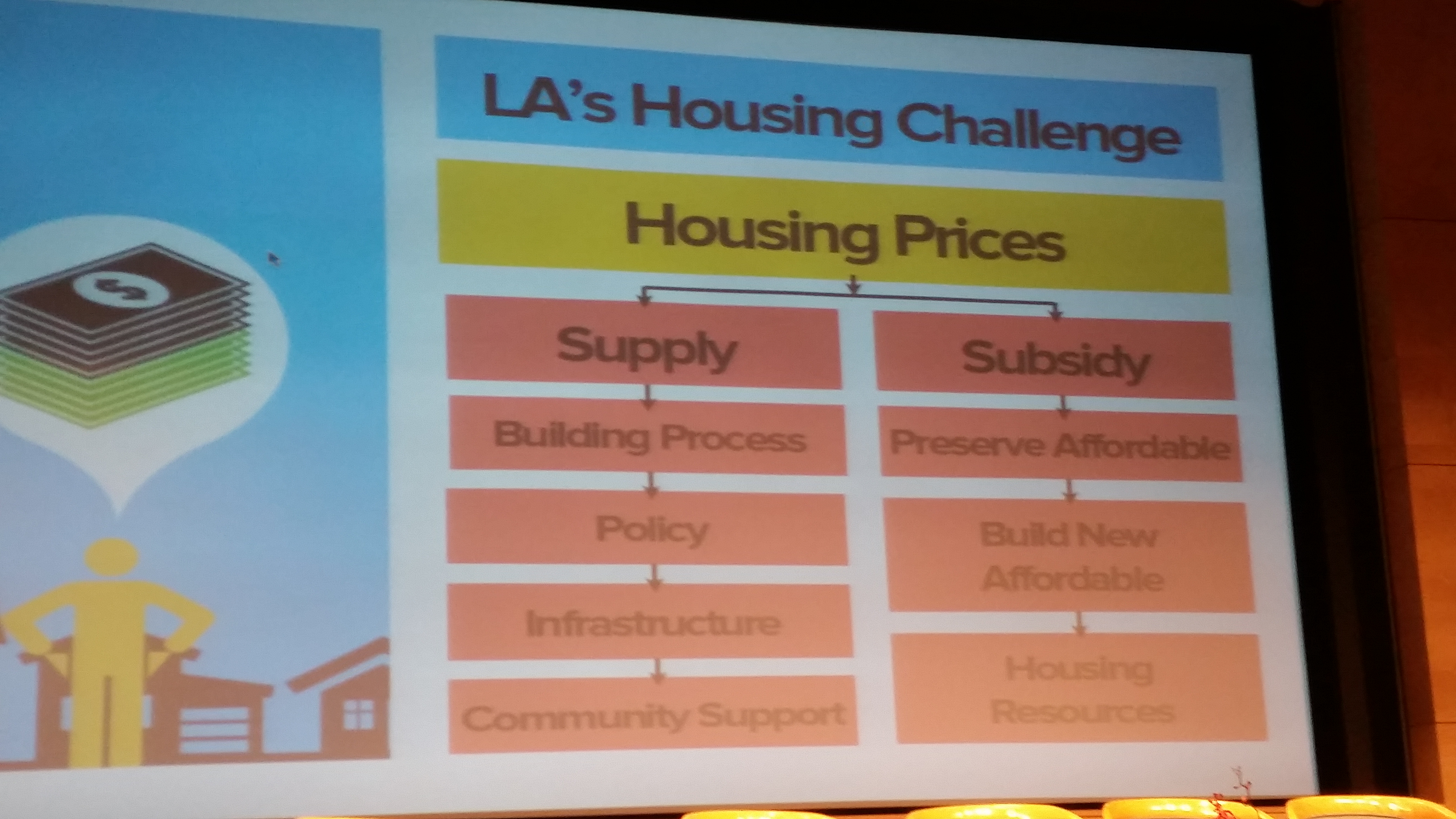 (Note: This article was originally published at Los Angeles Streetsblog. The issues, however, are regional and remain vitally important to the future of smart urban planning in Santa Monica and other cities in the county.)

It is no secret that Southern California is currently facing one of the worst housing crises it has faced in more than half a century.

While it isn’t a revelation to most that it’s getting harder and harder to be poor or even middle class and afford to live in Los Angeles County – especially in westside cities like Santa Monica – it was refreshing to hear Garcetti address the root cause of this crisis: a lack of new housing being built.

But even more refreshing was to hear Garcetti, who currently chairs Metro’s Board of Directors, talk about making sure new housing – especially units affordable to low and middle-income residents – gets built next to the region’s expanding transit system.

At the summit, Garcetti announced his plan to increase L.A.’s housing stock by 100,000 new units by 2021. At the same time, he announced his intention to bring a motion before the Metro board to “analyze affordable housing preservation and construction around our transit system, from using MTA-owned land and targeting transit-pass programs.”

Does that mean we may see some of those sprawling surface parking lots redeveloped into places where middle- and low-income residents – many of whom rely on public transit for their daily commute – can live?

Studies have shown that lower-income residents will leave their cars at home 50 percent more often if they live within a quarter mile of reliable public transit.

Placing affordable housing near transit is a major tool in combating these issues, which is one reason why State Senator Darryl Steinberg fought for a generous portion of the California’s cap-and-trade money to be used to subsidize transit-oriented development.

The reality is, Garcetti said, that without growth, especially near transit, the region’s problems will only get worse. While the housing crisis may be evocative of the post-war era, regional leaders seem to realize that sprawl – the answer to our mid-century housing crisis – is not the answer today. (In case you didn’t already realize it, sprawl is really bad for people, the environment, and the economy.)

“All of us feel the impact of the traffic challenges [unaffordable housing] creates, the environmental challenges that it manifests, by forcing residents to move farther and farther away from where they work in order to afford housing with longer commutes, and more greenhouse gas emissions and sprawl.”

While part of Garcetti’s plan is to help developers cut through red tape to build well-sited market-rate housing, the affordable housing component could prove trickier. Los Angeles, like many other cities in the area, is facing a crippling shortage of money to help fund subsidized housing.

Federal and state funding sources for affordable housing have dried up and in 2012, Sacramento killed the state’s 400 redevelopment agencies, which provided municipalities with a steady stream of tax revenue for, among other things, neighborhood revitalization and affordable housing construction.

Cap-and-trade money will certainly help, but in the first year, there will only be about $130 million available for affordable housing for all of California.

Ann Sewill, vice president of California Community Foundation, said earlier in the summit that, while cap-and-trade money will certainly help bolster transit-oriented affordable housing production, since it essentially comes from a tax on polluters, the idea is to reduce carbon emissions, and therefore, reduce the revenue stream, like a tax on cigarettes. She also brought up the issue of Metro leveraging its real estate assets around transit to build housing, an idea that seems to be gaining traction politically, based on Garcetti’s comments.

Identifying a local revenue stream dedicated to affordable housing is key to Garcetti’s vision. It’s something that municipalities around the state are struggling with. Santa Monica voters will go to the polls on Tuesday to decide whether to approve Measures H and HH, which would increase the city’s property transfer tax and could raise upwards of $10 million a year for affordable housing construction and rehab.

Sitting on an earlier panel, Los Angeles City Councilmember Mitch O’Farrell, who represents district 13, talked about the funding crunch facing Los Angeles. From 2008 to 2014, Los Angeles’ affordable housing fund plummeted by some $80 million to $20 million, chump change in a city that size, especially since estimates show that Los Angeles alone – never mind its neighbors like Santa Monica – is short half a million affordable units.

One solution, he said, would be to reduce parking requirements in new affordable housing developments along transit corridors, which would help lower construction costs and therefore rents. Also, it would encourage people to drive less.

O’Farrell, and a number of other speakers, including Garcetti, also noted the importance of raising wages as a mechanism to help housing be affordable to a larger pool of people, since rents have increased significantly faster over the last decade than have incomes in the Los Angeles region.

John Huskey, president of Meta Housing, was also on the panel with O’Farrell. He added that embracing smaller units in mixed-income, multi-family housing along transit corridors is another way to get what is referred to as “naturally occurring” affordable housing, meaning that it is affordable without a public subsidy.

Growth is inevitable, Garcetti said, and we are still struggling with the legacy of decades of popular opposition to growth.

In some municipalities in the county, growth remains a major political issue. In Santa Monica, for example, one of the major battles has been around growth of all kinds, even affordable housing. In reality, Santa Monica’s population has grown very little in the last 30 years, but anti-development activists decry perceived overdevelopment.

Los Angeles, it seems, may be better ready to accept the demographic realities of the region’s success.

“We thought in the ’80s and ’90s, if we didn’t build things, people wouldn’t come. Remember, we grew by 200,000 people. People will come for other reasons,” Garcetti told the crowd gathered in UCLA’s Korn Convocation Hall.

“They can still have kids and they can move freely in and out of our city. We’re not some sort of walled city-state. In that time, what that meant is that people crammed into the old infrastructure,” he said. “That’s why we can’t find parking places, that’s why we have so much traffic, that’s why people are living in sub-standard housing.”

Garcetti talked about the importance of CEQA (California Environmental Quality Act) reform as way to “keep the strong protections of environment, but not the abuses that single individuals can do to tie up projects, often times losing [in court], but killing the momentum of projects we badly need throughout the state and certainly this city.”

While a lot of really good ideas were bandied about Wednesday about job growth, solving income disparity, encouraging housing construction, and activating transit nodes, there was virtually no discussion about other modes of transportation, namely walking and biking.

Rob Jernigen, from Gensler Architects, talked about the importance of mixed-use density as a means of making it easier for people to live, work, and play within the same community and how that encourages people to leave their cars at home. But it was a footnote in a larger discussion about reimagining the region’s isolated and disparate neighborhoods and cities as urban centers.

“We move too many people too far,” said Jernigen. He used Downtown Los Angeles as an example of a core that was once designed for a single use, namely as an employment center, now becoming a multi-use district where people work and live.

“Our problems aren’t because of declining population or a lack of investment. It’s precisely because people still want to be here, despite the challenges we face,” said Garcetti.

At least it seems that regional leaders are ready to begin tackling the problems facing Los Angeles and other cities in the county that have been born out of decades of short-sighted, unsustainable planning that puts cars first and people second.