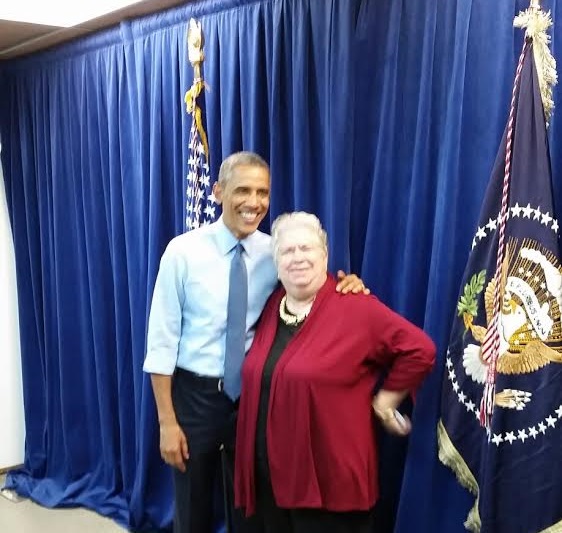 President Barack Obama stopped off at Cross Campus, a local co-working space and incubator for startups, in Santa Monica Thursday as part of his three-day fundraising trip to Southern California.

During the event, which was attended by local officials Mayor Pam O’Connor, L.A. Mayor Eric Garcetti, and State Assemblymember Richard Bloom, as well as about 100 entrepreneurs who work out of Cross Campus, Obama praised the innovation coming out of the Millennial generation.

“In some ways entrepreneurship is in the DNA of this generation, and a lot of that is taking place all across the country. Obviously California is the epicenter of it,” the Los Angeles Times quoted Obama saying at the event.

Santa Monica is home to about 40 percent of the Los Angeles-region’s tech community, making it an ideal place for the president to deliver his message in praise of young entrepreneurship as a driving force in America’s post-industrial economy.

“The mayor of Santa Monica, Pam O’Connor, is doing a really good job,” Obama told the crowd Thursday. Obama also showed his support for O’Connor’s work later when Garcetti mentioned to Obama that O’Connor was running for reelection. “I endorse her,” Obama said.

“It was a great honor to have Barack Obama host this event at Cross Campus,” said Ronen Olshansky, Cross Campus CEO and co-founder. “An honor for us, for our members who attended the town hall style event, and an honor for the entrepreneur community in Los Angeles, which has been increasingly capturing the attention of a global audience.”

It is no coincidence that Santa Monica has become a desirable place for millennials to set up shop. As a whole, millennials have opted to ditch their cars for bikes and public transit and Santa Monica is about to undergo a public transit revolution, thanks in part to O’Connor’s work as Santa Monica and the Southbay’s representative on the Metro Board of Directors for the past decade.

The coming Expo line, which will connect Downtown Santa Monica to Downtown Los Angeles by train for the first time in half-a-century, opens to Santa Monica in early 2016. Cross Campus is located several blocks from the future 5th and Colorado station. Cross Campus will open a new location  in Pasadena, which will soon be accessible from Santa Monica via a one-transfer train ride, once the regional connector project in Downtown Los Angeles finishes. (Note: An earlier version of this article said the regional connector would allow travel from Santa Monica to Pasadena without transferring. It will allow one-seat trips between Santa Monica and East L.A., Azuza and Long Beach. It will allow one-transfer trips between Pasadena and Santa Monica.)

Then there’s the city’s dark fiber network. Since the late 1990s, Santa Monica has been building out a high-speed Internet network that it operates as a public utility. That network, which the City is exploring opening up to residential properties, offers businesses a competitive option for Internet access over providers like Verizon.

Even though political opposition to new development has made Santa Monica the most expensive housing market in the region, as a whole, the City’s policies have created a desirable place for one of the most diverse generations in this country’s history.

According to the L.A. Times, “Before the event in Santa Monica, the White House released a report on millennials that described them as diverse, tech-savvy and highly educated. Forty-two percent of millennials identify with a race or ethnicity other than non-Hispanic white, roughly twice the share of the baby boomers when they were the same age. Sixty percent of adult millennials have attended college, whereas 46% of baby boomers did so, the report said.”