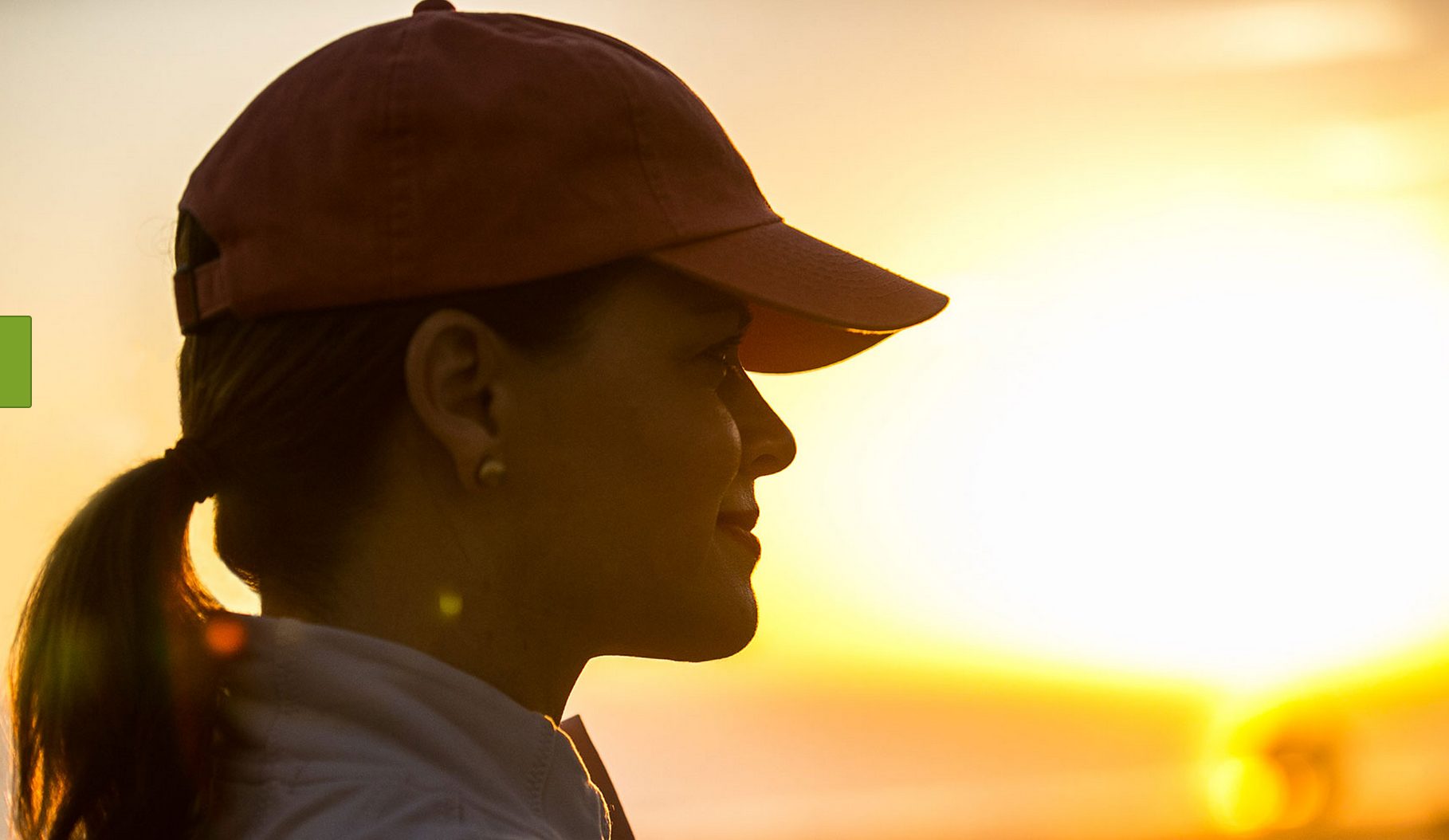 Zoe Muntaner arrived in Santa Monica in 1997, over the past couple of decades she has lived in Brooklyn, Puerto Rico, Dubai and basically all over the world. Coming from a family with a political background in Puerto Rico, Muntaner is no stranger to organizing and life as a candidate. In 2012, she returned to Santa Monica and decided to call this city “home.”

The following discussion has been lightly edited for clarity. Sometimes something doesn’t read as good on paper as it does when it’s spoken. If you don’t trust my editorial skills, you can listen to the interview, courtesy independent film maker Alex Pollini.

Santa Monica Next: One of the things that makes your candidacy different is that you’re not the candidate who says “I’ve been in Santa Monica for 35 years” or “I’ve been a resident my whole life.” How does that perspective make you a stronger candidate than some of your competition?

Zoë: I am the strongest candidate because that gives me a different perspective. I can put myself in the shoes of different people. I can represent the views of many different people at the same time. I moved here in 1997. I moved to New York in 2005. I moved to Dubai in 2010. I went to Nantucket in 2011. I visited with my parents in Puerto Rico and had to make a decision on where was going to be my next place. I chose to come back to Santa Monica and set roots here. I’ve chosen this to be home now.

I traveled around the world, and this is the place I want to call home because it reminds me a lot of Puerto Rico. It has the mountains, it has a beach, it has a farmer’s market, a biking community, great weather…and the engagement of the people in the social and political process.

Those are qualities that Puerto Rico has and that has made Puerto Rico a gem of the Caribbean. Because people are kind of relaxed in their activism, Puerto Rico took a nose dive down. It was infected by crime, and drugs, and poor urban planning and poor decisions in government.

That’s when I saw it coming and how powerless I was to do something about it. So, I decided to leave.

Years later, my mother said, ‘Oh my gosh, you were so smart. You saw it before it happened.’

I grew up going to political rallies with my parents. My parents are really politically active. My mother ran for office. Heavy fundraiser, machine of the party of her choosing, which is not my party. My aunt lives in Spain. My grandfather immigrated from Spain to Puerto Rico. So I’m second generation Puerto Rican. I have an American Passport and a Spanish Passport.

Actually, it’s a European Union Passport. I can travel to any country and be a citizen in Europe.

That brings a perspective. A global perspective. I’ve traveled a lot, and I have ideas for Santa Monica that I’ve seen in other countries. Some of them have worked, some of them that we’re trying to implement here have not worked. But, the market is different, the community is different. It doesn’t mean that they have not worked in one place doesn’t mean that it doesn’t going to work here.

But the implementation of these ideas have to have a strong foundation of experience and that’s what I bring. Experience.

Zoë: Thank you so much for that question.

I lived in Brooklyn when Brooklyn was starting to get that <unintelligible> sense in 2005 and the problem that it had with gentrification.

My aunt lived in Brooklyn for 35 years. Brooklyn was beginning to boom because Manhattan was starting to get so upscale and so expensive that the artists and families were going back to Brooklyn.

I chose Brooklyn because my family had history there, my aunt lived there, and I just loved that slower pace.

There are social problems when you have development. I am a firm believer in development, but slow, creative and good development. Not development that makes a city look like a box, cookie-cutter, lego-land.

I would like to see private architecture and incredible programs that allow us to use more bikes and make a more walkable city. But you have to do that in a way that it’s paced because change takes time. People rebel when you try to do change too fast.

Right now we have a very polarized city. People are very angry. This is an election that’s going to be a game-changer, I’ve been telling this for the last six months.

We have to take it easy with the people when it comes to change and really educate them in ‘what’s in it for them’ when we do this development. I don’t think the city has been very clear or transparent in saying, ‘yes we’re doing this development, but this is what’s in it for you.” When they see the value, it’s an investment in their time.

I don’t know if the Metro Rail has this here, but we had a first class. You pay more money on your card and the first car had better seats…leather seats.

SMN: We don’t have that here yet…

Zoë: It was cool that if you paid a premium on that, because the other cars are very crowded, and that specific car is not that crowded because people had to pay a premium. You will always have a seat if you pay that premium.

I would like to bring that issue to the Metro Rail.

SMN: You said before we were on camera, or on phone, that you can build a great city, an economically strong city, but it’s important for the city to have compassion. I think you said, ‘have a soul.’ Am I remembering that correctly?

Zoë: Yes, definitely. The name of the city is Santa Monica. Let’s start with that. If you know the story of Santa Monica, she was the most compassionate mother that could be. Her son was a rebel, Saint Augustine. She prayed for him, and she had incredible compassion for her son. Her son turned around and became an incredible voice for compassion herself.

SMN: So what can you as a City Councilmember do to encourage Santa Monica a more compassionate city?

I think you have to start with that. You have to evaluate and do a soul-searching yourself. People should ask of the candidates and ask of the people that are in City Council, why are you choosing to do this job.

It’s a tough job, and we all have busy lives and busy careers. I, personally, have six companies I’m trying to grow. But I felt called to serve.

It’s like how many actors feel called to be an actor. It’s a tough job and why are you putting yourself through all of that rejection and the tough environment. It’s because you feel called to.

Coming from that background of service that I come from, my parents worked in the elections every year…after I went to the Santa Monica for Renters’ Rights Interviews it was just something I felt in my gut and i felt it in my heart that I needed to do this.

I also want the City Council to be more autonomous.

But guess what, the City Attorney ended up exposing the city to a lawsuit. 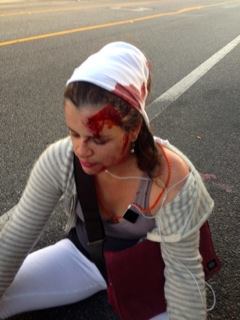 SMN: So when we reached out the City Council candidates to talk about what they would do for bicycling, you mentioned that you had been in a crash.

Zoe: Yes. Well, I have a little scar right here…(gestures towards temple).

Zoë: I had a good plastic surgeon.

SMN: Were the crashes in the city?

Zoë: The big one was on Broadway, half a block from my house between 10th and 9th. You know, Broadway is THE BICYCLE LANE. That’s our main bicycle lane. And you know, the bicycle lane was poorly maintained.

There was a hole, and my bicycle got the hole and stuck like it was a wall. The brakes came down and threw me over the handlebars. I landed on my face, and shoulder. Because of the speed of body and physics, my face was scratched by the pavement…I want to show you the pictures. It’s like the elephant man. It’s like pizza.

SMN: Where did the pictures come from?

Zoë: Believe it or not. I layed down…this is how trauma works. I feel blood, I feel wet. Something is telling me to come up, so I come up. When I come up, I have like 20 people around me. The first thing I start saying is ‘take my picture, take my picture.’

I knew there was something wrong.

The first thing I start asking, ‘my vase.’

I had went to Pottery Barn that day and I bought a vase. ‘My vase, my vase.’

SMN: But you’re getting a new bike (we were at the shop where it is being built), so you’re obviously not dissuaded from bicycling around the city.

Zoë: I’ve gone on a couple of rides since then…

SMN: I saw you were on the Yes on LC ride this weekend?

Zoë: I went to the start to support it and send them away, but I’m in the middle of a campaign. I can’t spend two hours…

Zoe:  I support them. Yesterday I was at the activist support circle. It’s important for them to have their voice heard. We all want something for the airport that is different than what we have. Even if it stays open, we’re going to have to see some compromise there.

SMN: Usually the last question we ask people is that, ‘If you could change one thing about Santa Monica with a magic wand’ what would that be. One thing, with no constraints.

Zoë: Bicycle insurance for all the riders.

That would make people feel safe that if something happens, the city will take care of them. We would have double the bicycles that we have now.

SMN: Is that a campaign platform too?

Zoë: Yes. I’ll get the money. I’ll find the money to do that.

When I had my accident, I talked to (City Manager) Rod Gould and Rod told me ‘you have to put a claim against the City.’ Then when the claim is denied, you have to hire a lawyer and sue the City.

But I spent like $10,000 of my own money in this accident. That’s a lot of money. And that’s a reason why a lot of people don’t use the bicycles.

If we offer insurance and we have bicycle lanes that are well kept, we double the amount of bicycles. And we do a very robust campaign to explain to people what we have in store for people that ride the bicycles. We offer incentives with the private sector.

For example: If you get a bicycle and don’t use a car, you get a 15% discount in stores like this. If you use a bicycle as your main form of transportation, you get an incentive from the City.

There are things we can do to incentivize the riders and create a transportation transformation in Santa Monica.

SMN: Great, is there anything else?

Zoë: Are you voting?

SMN: I don’t live in Santa Monica, but I am voting.

Zoë: Well you can donate to my campaign at http://www.zoe4citycouncil.org/.