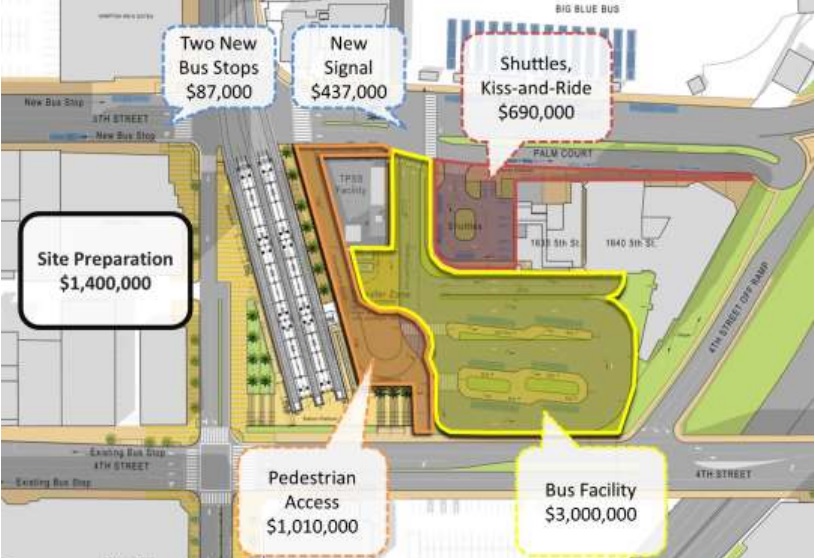 Plans for a new bus layover site south of the 4th and Colorado Expo Light Rail station will go before the City Council tonight, but not everyone is happy with the proposed $8 million plan.

The plan to redevelop the City-owned 86,250 square foot property — formerly the Sears Tire Center — into a bus transfer zone with six bus bays and a shuttle turn-around, some say, falls short of making the area a truly multi-modal transit center needed to serve Expo.

And though presented as an interim plan, staff said it could be as long as 10 years before anything new was considered for the site.

Downtown Santa Monica, Inc. (DTSM), the nonprofit that manages and promotes the city’s Downtown district, has “strongly opposed” the proposed plan citing “significant concerns” with it, including, “Insufficient space for encouraging multi-modal use, including bicycle use, adequate accommodations for pedestrians, and limited access for shuttles,” according to a letter submitted by DTSM to the City Council.

“As the property owner of the station site at 4th and Colorado, Big Blue Bus is pleased that the interim use plan provides a dynamic balance of provisions for all modes of travel at the station,” said Ed King, director of transit services for the Big Blue Bus.

“Big Blue Bus is inherently invested in and committed to a multi-modal layout at the station as transit, cycling, walking, kiss and ride, and commuter shuttles are, together, key to providing first and last mile connectivity to our shared constituency,” he said.

The proposed project allocates the bulk of the site to bus circulation, adding six new bus bays to an off-street transfer zone as well as adding two new bus stops to 5th Street north of Colorado Avenue, since Big Blue Bus estimates that a bus will arrive to the area about every six minutes.

The project renderings show space for a bike share station, about a 20-foot-wide pedestrian sidewalk that allows access to the bus area, and a public restroom. But there appears to be no place for secure bike parking on the site.

The plan also regulates “kiss-and-ride” exclusively to a small segment of the curb on 5th Street, because, according to staff, the “complexity of the CalTrans process” precluded allowing vehicle access from 4th Street with a curb cut.

The plan, DTSM said, would turn 5th Street into an even more contested — and congested — area with pedestrians, bicyclists, and transit users vying for space against vehicles exiting the freeway, since the 5th Street exit on the I-10 dumps motor traffic along the east side of the project site.

Even though it has its critics, the plan, staff says, is the best option for the time being.

“The proposed design provides the lowest cost improvements that provide the highest possible level of service for the Big Blue Bus, including the appropriate ADA compliant pedestrian access between the station and the bus facility,” staff wrote in the staff report.

“The proposed interim use maximizes bus bays on site and incorporates functional and design components that meet the interdepartmental interim use criteria,” staff wrote.

Even so, DTSM called for the Council to hold off on a decision and further study what can be done with the site, citing concerns that $8 million was a significant community invest for an an interim project and could likely make it difficult to redevelop the site later down the line.

Big Blue Bus officials maintain, however, that it would be very easy to replace the proposed use once a more long-term plan was in place.

There is also the fact that Centennial Real Estate Company, which owns the property on the other side of the City-owned parcel, has proposed realigning the freeway exit at 5th Street as part of a future redevelopment of its property.