Santa Monica could move forward with plans for a 500-bicycle bike share program at this Tuesday’s City Council meeting.

After more than two years of planning and waiting, the City Council will decide whether to approve a contract with CycleHop, LLC for the purchase and operation of the new system, which would place 65 to 75 stations throughout the the bayside city, in Venice to the south, and West L.A. to the east.

“Bike share is overdue for our region and I’m glad Santa Monica is taking the lead on making bike share happen,” said Santa Monica Mayor Pam O’Connor, who sits on the Metro Board of Directors. “By the time Expo Light Rail opens in 2016 our city’s bike share facilities will be ready.”

The new system, if approved, could be up and running by next summer, according to staff. As proposed, the program would cost the $8.1 million over seven years. Those costs would be defrayed by about $1.5 million generated annually with user fees and advertising/corporate sponsorship fees, according to the staff report.

Because Santa Monica’s bike share will likely be incorporated into a regional model in the future, much of the planning is being done in coordination with Metro and the Westide Council of Governments (COG). Back in 2012, it was recently-elected State Assemblymember Richard Bloom — formerly a Santa Monica City Council member — who convened the Regional Bike Share Committee to oversee coordination of any such program.

“Metro considers Santa Monica to be one of its pilot areas for a regional system it hopes to coordinate,” City staff wrote in the report. “Staff is seeking concurrence from Metro on a price and fee structure and parameters for system identity so that the proposed Santa Monica system may merge as smoothly as possible into the regional system as it develops.”

It’s particularly exciting to see this item go before the City Council because, for Santa Monica, it has been a long time coming. And, with Expo Light Rail expected to begin shuttling passengers to Santa Monica in 2016, bike share would help move people to and from the stations without their cars.

The bayside city has already been a regional leader on bike share. Santa Monica voted to 5-to-1 to seek vendors for a bike share program back in 2012 and in 2013, it was the only city that had managed to secure grant money from Metro and the Air Quality Management District (AQMD) – more than $2 million – to launch a program.

The City opted to wait for the region to catch up, since it is vital for the functionality of a regional bike share system that different cities don’t have incompatible systems.

At a Metro Board meeting in October 2013, O’Connor said, “Hopefully, we’re all going to work together, but we can also get something going sub-regionally. Santa Monica shouldn’t have a different bike share system than Los Angeles or Culver City.”

But, according to City staff, any further delay would jeopardize the grant money Santa Monica has secured.

Staff is also recommending that the new bike share program go with a “smart-bike” – manufactured by Social Bicycles (SoBi) – model, instead of a “smart-rack” model. 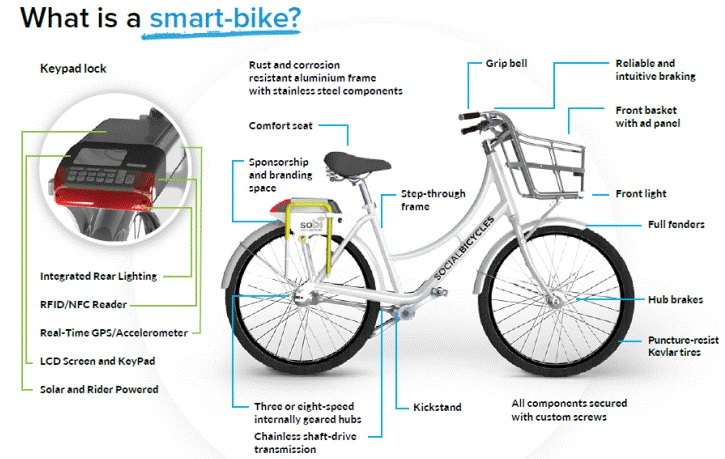 “SoBi’s ‘smart-bike’ system (one in which the technology for renting, releasing and locking the bicycles is on the bikes rather than on the racks) was also preferred for its advantage in offering a lower per-station capital cost than was anticipated because it does not require that a pay kiosk be incorporated into each station,” according to the staff report.

“Instead, each bike is capable of accepting payments and releasing the bike-locking mechanism independently via a mobile, web and administrative software that interacts with the smart-bike hardware,” the report reads.