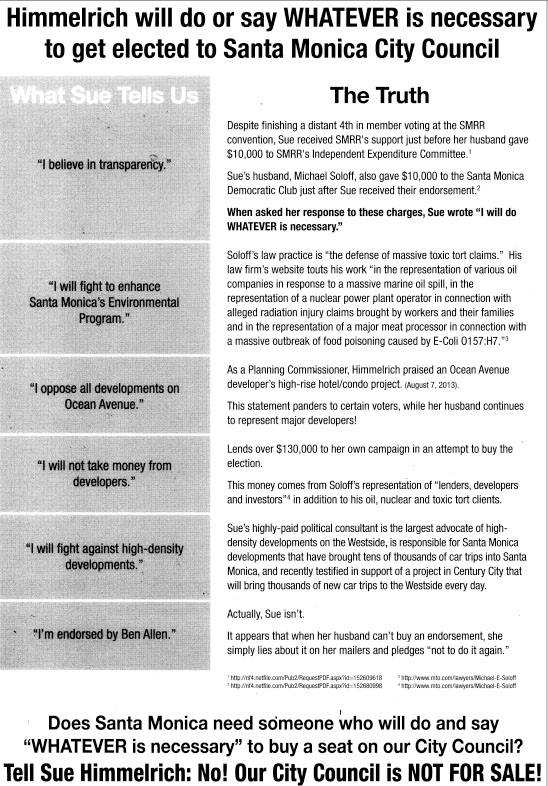 I’m going to admit it. As a former political operative turned activist turned journalist, I have a pretty high threshold for what I consider unfair or dirty campaigning.

That being said, I’ve been unpleasantly surprised by the tricks, vitriol and outright lying in this election. And thanks to the amount of money sloshing around in Santa Monica, one resident reported receiving 43 mailers yesterday morning. So many that the post office did two deliveries… one of political mailers and one of everything else.

What’s been especially frustrating for me has been how smart-growth principles have been thrown under the bus in a cynical and calculating way.

Without further adieu, here are my three “favorite” ads, all of which contain either attacks or lies that I hope die when the campaign ends.

After City Council Candidate Sue Himmelrich’s campaign sent out a mailer comparing plans to expand the Miramar to Godzilla, Ocean Ave. LLC, which owns the Miramar fired back by circulating the above flyer.

We don’t claim to cover campaign finance, so I’m not going to try and fact check claims that Himmelrich is buying endorsements via contributions from her husband who makes money representing developers and oil companies. If anyone is interested in a discussion of Himmelrich’s largely self-financed campaign, they can read about that here and here. That’s not our gig.

It’s one of the other attacks that rankled me. The shot at her “highly paid consultant” is a clear jab at former Santa Monica Mayor Denny Zane, who is managing Himmelrich’s campaign. Singling out his support for dense, transit-oriented smart-growth and mixed-use development is doubly bad.

Regular readers of Streetsblog aren’t even aware of Zane’s involvement in Santa Monica politics; they know him as the smart-growth guru of Move L.A., the non-profit that has tirelessly pushed for expansion of our rail transit system and dense transit-oriented development. At least, outside of Santa Monica, since Zane took an active role in scuttling the Bergamot Transit Village project earlier this year.

Still, attacking Zane’s leadership on transit and promoting dense, mixed-use development along transit, is wrong…. not to mention besides the point

Zane’s smart growth credentials have nothing to do with Himmerlrich’s ability to lead. It’s true she has positioned herself as a fierce opponent of future development, including a proposal for a mixed-use affordable housing project at 4th/5th an Arizona because it was taller than 84 feet. (Zane was originally a paid consultant on the project). So it’s also clear that she may listen to Zane for political advice, she’s not adopting his views on development. 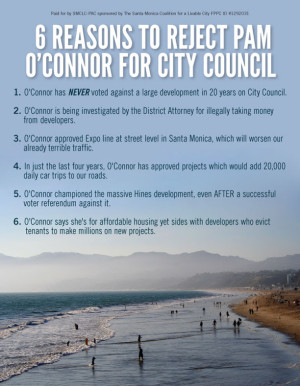 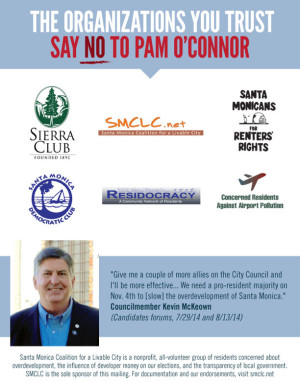 Another mailer that struck a bad chord was one by the Santa Monica Coalition for a Livable City delivered to boxes last Friday, which attacks Santa Monica Mayor Pam O’Connor for all sorts of bad things. You almost wonder what SMCLC would do if it manages to succeed in its quest to oust O’Connor, their fixation on her is impressive in its focus.

Among the list of wrongs that SMCLC claims O’Connor visited on the city, it lists:

O’Connor did indeed approve the route of the Expo Line, both as a member of the Metro Board of Directors and as a member of the Expo Construction Authority. Her crucial role in expanding transit region-wide is a well-known asset to her campaign. As for whether or not Expo will “worsen traffic,” that’s subjective, although studies show Expo leading to a net decrease in car travel times compared to the no-build options.

So what’s the problem? SMCLC used the logos of other groups that endorsed in the election but did not endorse O’Connor on the back of the flyer which could lead some to think that these groups approve of these attacks. Most galling is the Sierra Club’s logo, which appears first, because of the Sierra Club’s leadership in pushing for the Expo Line back when rail transit to the westside was considered a pipe dream.

Sierra Club representatives, while affirming their support for their endorsed slate of Himmelrich, incumbent Kevin McKeown, and Richard McKinnon, confirmed that their logo was used without permission. In further email communication, they also stated they have contacted SMCLC about not using their logo in the future without their permission.

Everything That SM Voters Decide Does

The entire pro-Measure D campaign has been built on deceit. From signature gatherers that told people that they were trying to close the airport, to using people’s names on flyers as supporters without them knowing, to bringing in hundreds of thousands (or maybe over a million) dollars from national aviation interests to try and keep the airport running at an unsustainable rate while polluting the air and enriching the renters who are subletting public land at a ridiculous markup.

But here’s the thing. Money talks, and we’re hearing that Measure D has a real chance of passing. By spending lots of money to try and tie the issue of airport maintenance to development,  the campaign might actually pull this off.

We’ve talked before about how the D Campaign is creating a haze of misinformation. Slow-growth Councilman Kevin McKeown agrees.

I hope not, because would be a sad blow for democracy if national interests can buy a ballot spot, buy a ridiculous amount of advertising, and buy a change to a city charter. It would also be a shame for a progressive city such as Santa Monica to find itself the Nashville of the West come November 5.