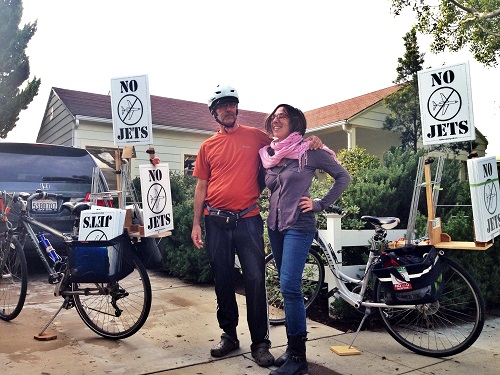 Editor’s note: Juan Lopez and Lisa Sandbank are two local activists in Santa Monica dedicated to making the local airport safer and cleaner for its neighbors.

The campaign to clean Santa Monica’s air by reducing or restricting jet access to Santa Monica airport has always had a green tint to it. But now, even the NO JETS lawn signs that spring up in Santa Monica, Venice, and other parts of West L.A. are being delivered by bike.

Juan Lopez and Lisa Sandbank are a Santa Monica couple delivering NO JETS yard signs on bikes equipped with racks they customized out of leftover wood to promote the Yes on LC, No on D campaign. Sandbank calls them the LC mobiles.

Lopez and Sandbank got involved with the Yes on LC campaign through NO JETS Santa Monica Airport, a neighbor coalition supporting the relief of health and safety risks from jets at Santa Monica Airport. They have been involved in the ongoing battle over the airport before national pilots groups began pushing for a ballot initiative that would have made changes to the airport’s current uses more difficult.

Lopez and Sandbank were both active in the Yes on LC No on D Campaign. For her, the political battles of the past year have been worth it.

“There are a lot of good things that came from that petition,” writes Sandbank. “One is measure LC which guarantees parkland for any future use of airport land. And another is these nifty bike racks Juan made. I always felt sadly hypocritical delivering the No Jets signs in a car but they wouldn’t fit on my bike. So I asked him to re-design our LC mobiles for NO JETS sign deliveries.”

Which is why Lopez and Sandbank are back on their bikes, handing out signs to those who want them. In the next year, airport leases will be renewed or rejected, a new city manager will be appointed, and negotiations will be made between city staff and the federal government in courts of law. We must continue this conversation and not let the city get complacent over the issue.

“We’re getting exercise while helping our community again,” writes Sandbank. “It gives us a great feeling of wellbeing.”

To order a free, community-sponsored NO JETS yard sign, email your name, street address and zip code to NoMoreJets@gmail.com