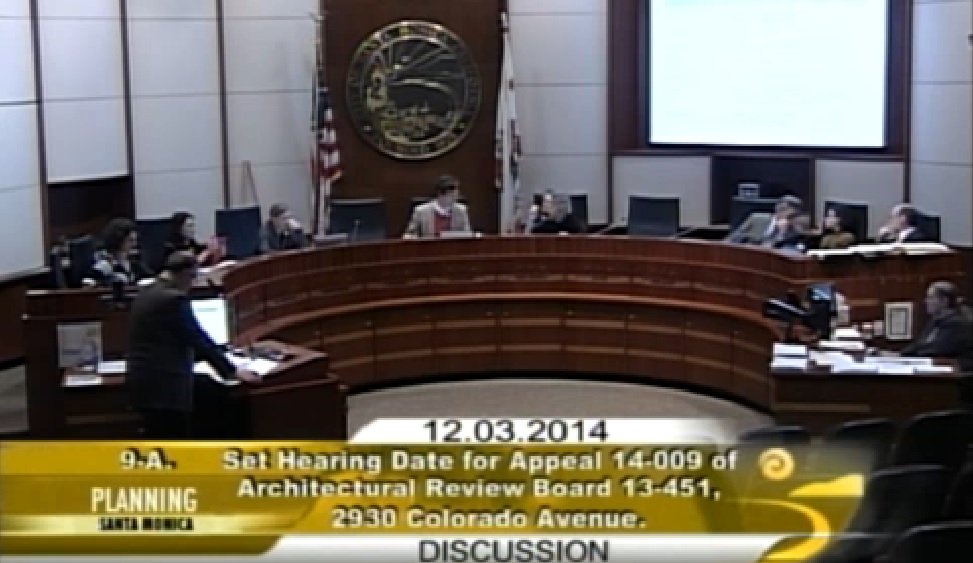 Increasingly it seems that people who live comfortable, established lives in Santa Monica are just not interested in making room for new people to have the same opportunities they did when they first moved to the bayside city.

At a Planning Commission meeting last Wednesday, former Planning Commissioner Sue Himmelrich, who was sworn in as a City Council member Tuesday, attacked the concept that Santa Monica’s new zoning ordinance should “protect and enhance the city’s ‘fiscal health.'”

Elected to the City Council in November on a no-growth platform, Himmelrich, at the Planning Commission meeting, insisted that the “fiscal health” language be removed — and replaced with the vaguer term, “sustainability” — as a guiding principle from the proposed zoning ordinance update because it could encourage real estate developers to push “crappy” projects by offering money to fund City programs.

Maintaining the fiscal health of the municipal government is, at its core, a progressive policy. The principle is one of using zoning to leverage the gains made by private interests from property investments to maintain a high level of public social services, living wages for civil servants, and socially equitable housing policies.

The opposite of the fiscal health strategy was best summed up by conservative activist Grover Norquist when he said, “I don’t want to abolish government. I simply want to reduce it to the size where I can drag it into the bathroom and drown it in the bathtub.”

Santa Monica isn’t the only city that sees the importance of maintaining fiscal health for the good of society. Vancouver, Canada has a “financial health” strategy, as do Toronto, New York, and Pasadena, just to name a few. City Attorney Barry Rosenbaum pointed out at the meeting that “fiscal health” is actually a very common goal in most cities.

According to the organization, “Many municipalities have found that a smart growth approach would improve their financial bottom line. Whether by saving money on upfront infrastructure; reducing the cost of ongoing services like fire, police and ambulance; or by generating greater tax revenues in years to come, community after community has found that smart growth development would benefit their overall financial health. Many of these findings have been made publicly available.”

It Costs To Run A Progressive City

Within its eight square miles, Santa Monica has five libraries, 26 parks (including a skate park and a public beach house), an urban runoff treatment plant, a vast network of nonprofits that serves some of the city’s most vulnerable people, and some of the best public schools in the county. The City also operates its own bus system, water treatment plant, and TV station.

To pay for all of that, Santa Monica has a roughly $520 million annual budget. That $520 million, about $220 million of which pays the salaries of the City’s 1,700 police officers, firefighters, planners, and other employees, comes from a variety of sources, including property taxes and sales tax.

Hotels, through the so-called bed tax, contribute about 14 percent of the City’s revenue, though hotels only make up about one percent of the land use in Santa Monica.

Simply put, if the City can’t pay its workers, the City will have to begin firing workers and cutting back on the services those workers provide.

No Growth Hurts Everyone

The actual level of development — both for housing and jobs — in Santa Monica has been fairly modest despite the heated rhetoric around housing construction. On average, the City has only seen a net increase of about 50,000 square feet of office space each year over the last decade and only about 230 new housing units coming online annually in the same time period.

While the City has managed to maintain a budget surplus despite the slow rate of growth in Santa Monica over the years, the lack of housing production continues to be a major traffic generator, since it keeps rents out of reach for the thousands of working families who commute to the city daily for work. As a result of the traffic caused by insufficient housing, working people lose valuable time and are more prone to major health problems.

That’s why, in part, Santa Monica’s Land Use and Circulation Element (LUCE) calls for zoning that would create denser, mixed-use neighborhoods along major transit corridors like Wilshire and the coming Expo Light Rail.

Himmelrich has joined the chorus of no-growth activists calling for downzoning on Wilshire to prevent the largely single-story commercial corridor from becoming a mixed-use, transit-oriented neighborhood.

It’s an example of what the December 2014 UCLA Anderson Forecast calls, “Suburb Syndrome.”

The report shows that Los Angeles County, which is home to one of the most expensive rental markets in the country, has produced an abysmally low number of new housing units in the last 14 years.

While the report speaks about Los Angeles specifically, much of what described is a regional problem: “We argue that one possible reason is that some Angelinos, especially rich ones, have a suburban mentality,” the forecast reads. “This mentality propels them to make efforts to maintain the current status quo and go against developing their neighborhoods with higher density housing, even near the Metro rail system.”

The report goes on:

To keep Los Angeles’ economy prosperous and to embrace more young talent in this great city, we suggest that ‘Suburb Syndrome’ in Angelinos’ minds needs to be cured. And the medicine is that all of us need to understand some new realties, as Dorothy in The Wizard of Oz said: ‘Toto, I’ve a feeling we’re not in Kansas anymore.’

1) With continued urbanization and population growth, L.A. has been and will continually be the destination of newcomers with the American dream.

2) High-density cities will have more affordable home prices. This will be one of the most efficient policies to help the middle class and the poor in the U.S. The infinite wealth of gorgeous sunshine in L.A. should be shared by more Americans.

3) Higher-density neighborhoods do not necessarily mean the streets will become dirty, the crime will go up, or the schools will fall apart. With a joint and consistent commitment from residents, nonprofit, private, and public sectors, we can make it work. The revival of downtown L.A. proves that high-density can accompany high amenities.

4) In the 21st century, high-density cities are actually more environmentally friendly and sustainable than low-density suburbs because of their smaller carbon footprint.

5) High-density cities do not necessarily bring more congestion. If so, we should have seen six time more congestion in New York City than in L.A., since it is six times more densely populated. Obviously, the numbers tell a different story. Building a smarter and more connected public transportation system will make a city less congested.

The Bergamot Transit Village project, aside from replacing a defunct pen factory across the street from the future Expo station at 26th Street with roughly 500 new apartments and about 400,000 square feet of office space, would have also added about $30 million to the City’s coffers to spend on parks, education, and other community benefits.

The anti-housing group, claiming the project would cause too much traffic, was able to successfully gather enough signatures for a referendum on the project’s approval. The Council voted to rescind the project before it could go to the ballot.

While it was just one project — and admittedly, it had its flaws — the increasingly vocal no-growth activists have begun to chip away at the progressive principles codified in the City’s planning policies and Santa Monicans who are young today will have to live with the potential consequences, like increasingly unaffordable rents, more traffic, and underfunded City services.