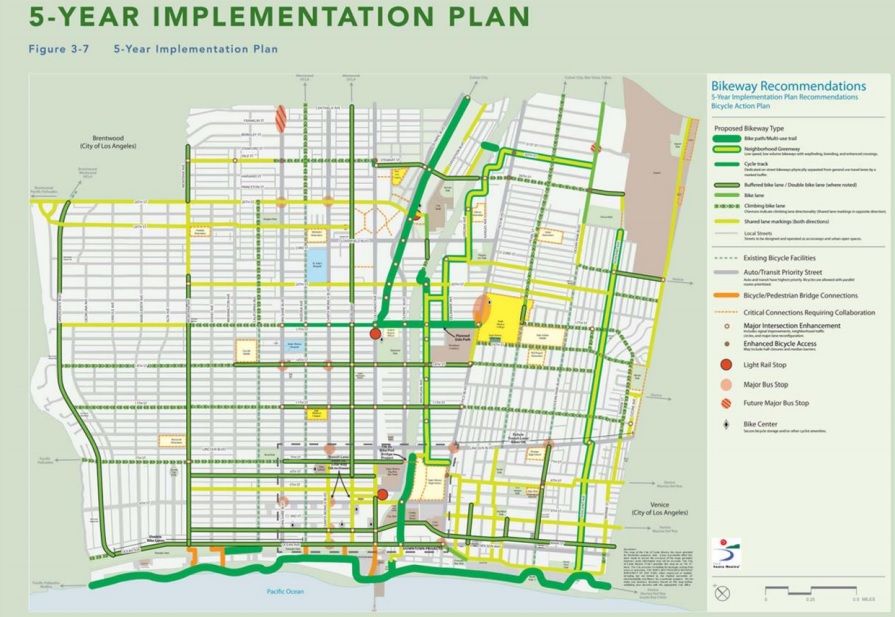 In November 2011, the Santa Monica City Council unanimously — and enthusiastically — adopted the Bike Action Plan (BAP), an ambitious 300-page document that seeks to transform the bayside city into one of the most bike-friendly cities in the country.

The BAP, the culmination of years of work by City Planning staff, local bike advocates, and residents, contains in its pages a 20 year vision to bring Santa Monica to the forefront of active transportation. While the BAP contains plans for dozens of miles of bike lanes, sharerows, and other road improvements, it also lays out a robust strategy to increase bike visibility and safety through education.

“People want a little bit of Copenhagen here by the sea,” Lucy Dyke, the City’s deputy director of special projects, told the crowd gathered in November at Santa Monica Spoke’s celebration of the third anniversary of the BAP’s approval.

The goal: to get more people out of their cars and on to bikes — the BAP sets a target of getting Santa Monicans to take 14 to 35 percent of all their trips on bicycles by 2030 — by making active transportation a safe, comfortable, and convenient option in the bayside city.

So, three years later, is the BAP working? The short answer is, yes, but there is more work to be done.

According to Dyke’s report, there were six fewer bike crashes reported last year than 2011. That isn’t to say crashes aren’t still a problem. Since 2011, the Santa Monica Police Department said they have investigated 874 serious collisions, which resulted in death or injury and involved peds and bicyclists.

Intersections through which more than 200 bikes pass through each day, Dyke said, see fewer crashes. And the number of intersections with that volume of bike traffic has been increasingly significantly throughout the city.

Santa Monica has also taken the lead on regional bike share after the City Council approved what could be the County’s first public bike share system last month.

Since the BAP was approved, Santa Monica has also seen its status as a League of American Bicyclist Bike Friendly Community improved.

The city went from “bronze” to “silver” status this year.

“This year, one of the things that’s new, is the City is going to pay for a part-time person to help coordinate with the School District” for Bike It! Walk It! events and other such programs, Dyke said.

According to official numbers, 4,000 Santa Monica-Malibu students walked, biked, or rode the bus to school during October’s Bike It! Walk It! Week, which was a record level of participation.

Events like Bike It! Walk It! are instrumental in encouraging future generations to get around their city safely on foot, on bike, or by bus.

The role of enforcement came up at the November meeting. Recently, the Santa Monica Police Department has begun a series of operations targeting unsafe road users, including drivers, bicyclists, and pedestrians.

While some of the safety education is targeted at current riders, there are also programs designed to reach out to new riders, like the Bike Center’s Adult Learn To Ride classes, which, Bike Center General Manager Ron Durgin said “are very popular with high demand and full classess.”

The Adult Learn Ride To Ride classes are particularly important because “this class specifically targets people who are not already riding and in fact most have never ridden a bike before,” he said.

There is the Bike Campus down at the beach where Santa Monica Bike Center staff hold bike safety lessons. And Santa Monica Spoke has also put out a guide to educate road users about their rights and responsibilities.

Dyke also pointed out that about 90 percent of the bikeways planned for the first five years of the BAP’s implementation are done.

And, new, improved bike ways, like Main Street and Broadway have seen the most increase in riders.

“I can say with a great degree of confidence that when we make higher quality bikeways, that’s what people choose to use,” she said, adding that Ocean Park Boulevard has seen a 95 percent increase in the number of people on bikes since the City added green bikeways.

Since the BAP was approved, bike lane and sharrow miles are up 122 percent and bike parking spaces are up 210 percent, Dyke said. This year, the City added nearly 2,000 new bike parking spaces with another 1,900 expected to come online next year as part of the City’s strategy to get people biking to the new Expo Light Rail Line.

The Michigan Avenue Greenway, which will connect the Expo Light Rail bike path to the beach by way of Santa Monica High School, is also slated to start construction in March. And, Dyke said, it is “very likely” that all the city’s current bike lanes could end up getting greened, like the lanes along Broadway and Main Street.

The City’s award-winning Bike Center in Downtown Santa Monica is another major — and visible — success of the BAP. The Center, which offers 24-hour secure bike parking to members, sees an average of 40 round-trip bike commutes daily.

It’s also an excellent place for short-term bike parking, offering non-members a secure place to stow their bikes (for free for the first two hours).

“A lot of people don’t know really know that they can leave their bike Downtown at the bike center for a couple hours free,” Dyke said.

But Dyke warned that more work needs to be done to get those in the city who may be interested in riding but remain concerned about safety on bikes.

“We’ve done a lot and we’ve gotten to a place where we could sort of be hitting a wall” in terms of the number of riders, she said.

The main issue is that new riders need to have access to routes that feel safe and protected bike lanes could go a long way toward that goal.

“We really need to do a lot more if we’re going to get the additional separated bikeways east, west and north, south… because it’s harder to do and there’s not a route identified for them,” said Dyke.

More neighborhood greenways, in the model of the Michigan Avenue Greenway, can also help to provide safe-feeling routes that could encourage first-time riders.