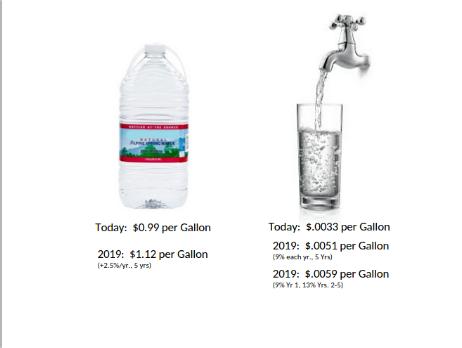 Anticipating the rising cost of water delivery and lost revenue for Santa Monica’s water fund due to a mandatory water use reduction strategy, the City Council last night unanimously approved a plan that could raise water rates in the city up to 54 percent over the next five years in increments up to nine percent each year.

After only about two hours, the City Council approved the more moderate fee increase schedule proposed by city staff to help keep Santa Monica’s water fund in the black, rejecting a steeper fee schedule that would have allowed officials to raise rates up to 78 percent over five years to help pay for future infrastructure improvements.

Councilmember Ted Winterer, who made the prevailing motion for the 54 percent fee increase schedule, said he’d rather the city look at alternative funding sources — possibly even a bond measure — to fund improvements to the city’s water system that would increase Santa Monica’s water storage capacity, improve the city’s ability to capture stormwater runoff, and the installation of Advanced Meter Infrastructure (AMI) to provide real-time data on water usage.

It’s also worth noting that the plan means that the Council can approve up to a nine percent each year through 2019, but that, depending on the financial situation, it could also approve a smaller increase but not a larger one.

Though Councilmember Gleam Davis was absent, the six remaining Council members were united in their support for the increase. Councilmember Sue Himmelrich noted that though she thought the increase should be modest in order to prevent a “shock [to] the system,” Santa Monicans are “underpaying” for water.

“I don’t think we’re paying the true cost of water and eventually, we will be, one way or another,” Himmelrich said.

Santa Monica Mayor Kevin McKeown sought to bring some perspective to the debate.

“In Ireland right now, there are hunger strikes under way over water rate increase. But, get this, the reason is they want to put in meters and begin to charge for water for the very first time ever. Water in Ireland has always been free.” he said. “The point is, whenever you raise [rates], even if you are raising them from nothing, people will be upset.”

It was noted that there is assistance available to low-income families who may not be able to keep pace with fee increases. For more information, check out smgov.net/water.

Councilmember Terry O’Day addressed comments from some speakers during the public testimony who claimed that they had done their best to conserve and a rate increase now seemed punitive and didn’t provide an incentive to continue conserving.

“In fact, with the rate increases, the difference between the bills [of a customer who saves and one who doesn’t] is even greater,” O’Day said, since the cost of water would be significantly higher for those who did make an effort to conserve.

Water as a No-Growth Talking Point

Using water as an excuse to oppose growth in Santa Monica has become a recent trend and one that was on display during the public comment period.

Councilmember Pam O’Connor took some time to address arguments raised by opponents that claimed the water rate increase was due to new homes and commercial space being built in Santa Monica.

“Folks were saying… that development [is] pushing this,” she said, adding that there has been less than 70,000 square feet a year of commercial space being built in Santa Monica over the last 12 years.

“The development that has happened is housing and we’ve heard from some neighborhood groups that are against that… but many of us are pro-housing,” she said.

Growth in Santa Monica has been particularly modest and mostly because the city is trying to keep up with the housing needs for  a growing regional population, the result of more people being born here than are dying. On average, Santa Monica has seen an increase of about 260 new apartments a year for the last 12 years and multi-family housing is significantly more water-efficient than single-family homes.

O’Connor added the real development boom in Santa Monica happened in the 1950s. She said that she had taken the assessors records for a block in Wilmont, one of the denser parts of the city. In 1950, she said, the block had about 50 homes, all single family. Then, by the 1960s, the same block had grown to 200 homes in multi-family units, most of which today are rent-controlled apartments.

While the Council passed a rate increase schedule that will keep the city’s water fund in the black, rejecting the higher rate increase means that the city will have to postpone plans for improvements to its water infrastructure designed increase water use efficiency and keep the city on track to achieve water self-sufficiency by 2020.

According to city staff, under the 54 percent rate increase, which would be phased in with nine percent increases each year through 2019, “Approximately $5 million in capital projects would have to be eliminated or deferred, which is a reduction in general system planned capital improvements of 15 [percent]. The likely projects to be reduced or deferred would be some combination of water main replacements and the AMI system.”

While a bond could be issued, the water fund wouldn’t have enough money to support it until at least five years from now, according to staff.