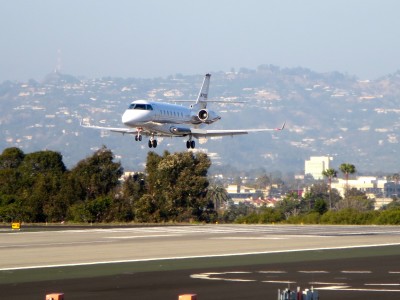 Pending litigation (as described in my post last week) shaped what the Santa Monica City Council could do with the Santa Monica Airport (SMO) at the council’s big meeting Tuesday night. The shape of the airport that emerged was one of disaggregation. It was not for nothing that the council’s discussion of the issue didn’t gain traction until Mayor Kevin McKeown broke the airport down for analytical purposes into three parcels. By evening’s end the notion of the airport as a unitary place had disintegrated.

Various users of properties on the south side of the airport, from artists and theater companies, to Barker Hangar and the Spitfire Grill, have viewed themselves as part of SMO even though the land they sit on was designated as non-aviation land under the City’s 1984 agreement with the Federal Aviation Administration (FAA). The council, however, by declaring that the non-aviation land is not going to be subject to airport leasing standards, conclusively severed these users and the land from the airport.

The decision on leases affects these users, but the most dramatic result of the disaggregating of SMO was council’s instruction to staff to fast-track the expansion of Airport Park by the addition of 12 acres of non-aviation land currently used for aircraft tie-downs. The new parkland will be the first manifestation of Measure LC, but more are on the way. There are other aviation uses in buildings on non-aviation land that will now be vacated, leaving room for more arts and cultural activities.

Continuing the disaggregation, the council made decisions that differentiate the Western, or “Quitclaim” Parcel, which includes about 2,000 of the 5,000 feet of the airport’s runway, from the “1948 Parcel” that constitutes the balance of the aviation land at SMO. The parcels are different legally. After World War II the federal government transferred (“quitclaimed”) its interests in the Western Parcel back to the City with no strings attached. The feds returned their interest in the 1948 Parcel to the City pursuant to an “Instrument of Transfer” that included the City’s promise to operate the land as an airport in perpetuity. The enforceability of that perpetuity clause is the subject of the City’s pending lawsuit against the FAA, a lawsuit that will take at least several years to resolve.

Depending on how that lawsuit proceeds, it’s possible that the City will want to close the Western parcel (and shorten the runway) before it can take action with respect to the 1948 Parcel. On that basis, responding to arguments from anti-airport activists, City Council instructed staff not to agree to rental agreements beyond month-to-month for any uses on the Western Parcel, while it allowed somewhat longer leases on the 1948 Parcel.

The most controversial action (assuming you’re for closing the airport) City Council took Tuesday was to authorize staff to negotiate leases on the 1948 parcel of up to three years (but ending no later than June 30, 2018). These leases can go to aviation businesses, but the council required that they include a clause allowing the City to terminate the lease early if it can close airport facilities. The leases may also include conditions that benefit the public.

Month-to-month leases would not make closing the airport or ridding the local skies of jets come any sooner. It’s unfortunate that the City didn’t file its lawsuit five years ago, but while the lawsuit is pending, relying on it is the City’s best strategy. The alternative would be for the City to close the airport unilaterally; this would, however, result in the FAA seeking and undoubtedly obtaining an injunction that could freeze the airport status quo for a long time. Requiring only month-to-month leases now means nothing.

In fact, I would have gone farther with the leases than the council did. There are good tenants on the 1948 Parcel, in particular Typhoon restaurant, that want to invest in tenant improvements, but can’t do so if they only have short-term leases. I wish the council had instructed staff to consider longer terms for tenants that commit to large investments in improvements. It’s unlikely that any aviation businesses would want to make long-term investments while the City’s litigation is pending. There’s a reason the FAA has been doing whatever it can to keep the 1948 perpetuity clause out of federal court and it’s the same reason aviation interests spent almost a million dollars trying to pass Measure D last year: the FAA has no case.

Tuesday night the council took a rational, legally justified, step-by-step approach to the airport. It’s unfortunate that some anti-airport activists, justifiably frustrated by the negative impacts of the airport, feel betrayed because the council didn’t accept their argument about month-to-month leases. And yes, SMO will be open for at least three more years. But it’s rare that the best strategies and tactics involve charging blindly into the breach.