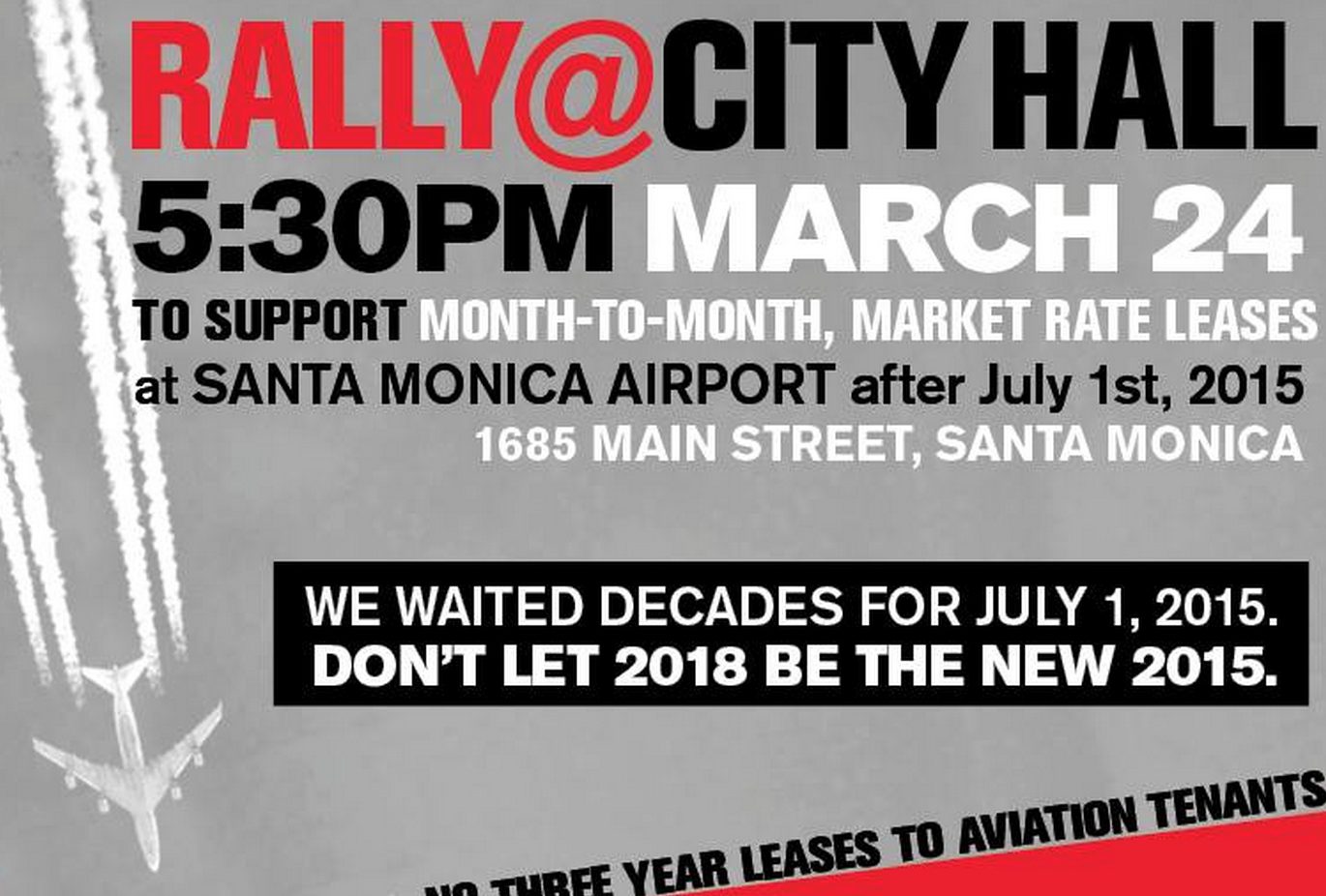 On July 1, an agreement between the City of Santa Monica and the federal government that requires the city to maintain low cost leases and an extra 2,000 feet of runway at the Santa Monica Airport expires. Whether this means that the city can close this portion of the runway and cancel leases remains a matter for lawyers and judges to decide, but one thing is clear: change is finally coming to the Santa Monica Airport. It might not get here until 2018, but it’s coming.

Tomorrow night, the City Council will debate what measures (read the staff report: here) the city should pursue to finally take a measure of control at the airport. While the Council-appointed Airport Commission and and some residential groups are recommending aggressive changes, such as moving all tenants to month-to-month leases and an immediate closure of the “quitclaim property” (the 2,000 feet of runway on the west end of the airport), the Council seems poised to approve a more cautious battle plan.

The city staff’s plan would put smaller and non-aviation tenants on month-to-month leases while the city negotiated new three-year leases with the five largest aviation renters. These leases wouldn’t just include higher rents, but also restrictions on what kind of fuel jets could use and even what kinds of planes would park at the spots. This more voluntary plan would avoid lawsuits as cleaning the airport and reducing jet traffic would be a collaborative effort and not one that would attract litigation from the Federal Aviation Administration and pilot advocacy organizations.

Many of the advocates who had July 1, 2015 circled on their calendar for years are unhappy with the three-year-lease plan.

“We have heard for decades that the airport problem would be dealt with in 2015, when the 1984 Settlement Agreement expires,”  Sunset Park resident Alan Levenson of No Jets Santa Monica Airport writes. “Now staff suggests extending Atlantic Aviation’s leases another three years. After winning LC, the city staff suggests making 2018 the new 2015. We do not want to give the jets an olive branch for three more years, especially when no contract or agreement or the FAA says we must.”

Sunset Park Anti-Airport Inc. writes on Facebook that converting all leases to month-to-month at market rates would immediately net the city $8 million a year.

Frank Gruber, a steering Committee Member for Airport2Park and one of the faces of the citizen’s groups fighting for more park space at the airport*, calls the possibility of putting the runway question on the ballot in 2016 “one certifiably bad idea.” After the small forest sacrificed for campaign literature during the Measure LC/Measure D battle, it’s hard not to argue with him.

Even the staff’s plan to begin to turn-over tie-down spaces for more public use is running into controversy. Gruber notes that this land could, and likely should, be turned into park space “beginning to fulfill the promise of LC!” but the staff also writes in its report.

For instance, it might be beneficial to the community to situate certain City government improvements at the Airport, such as an environmental center. Also, certain community serving uses, such as restaurants, and certain commercial uses, such as office uses on the north side, could continue to generate revenue to fund community amenities.

This language, taken on its own, seems to confirm the fears of proponents of Measure D in the last election which would have required a popular vote before any changes to airport property. These groups used fear of development to try and scare people to vote for a much more far-reaching ballot initiative.

Last November, voters approved Measure LC, which affirmed the City Council’s authority to determine the future of the airport, so long as future use of the land was low-intensity park and recreation space. Measure D, the rival ballot measure last November, would have required a popular vote for any changes made to the airport land.

While staff’s language was something of a surprise, it refers to the north side of the airport, the part of the property that would be decided in either a City Council vote or 2016 ballot initiative, not the south side which the city would begin “turning down” on July 1.

It will be interesting to see how the Council responds to this portion of the recommendation, either leaving in the non-binding language or changing it to reflect the voters’ will when they rejected Measure D last fall.

In the end, many advocates for comprehensive change at the airport find the staff report discouraging but are still hopeful for major changes at the airport.

“Congress Representatives Ted Lieu and Karen Bass, Los Angeles Councilmember Mike Bonin, and former Los Angeles Councilmember Bill Rosendahl are in favor of full closure of Santa Monica Airport,” writes Marty Rubin, the director of Concerned Residents Against Airport Pollution. “The Sierra Club and a large majority of Santa Monica residents are too. It’s time to stop catering to the filthy rich at the expense of the health, safety, and well-being of many thousands of families. All eyes are watching to see what the Santa Monica City Council will do.”

*And occasional Santa Monica Next contributor