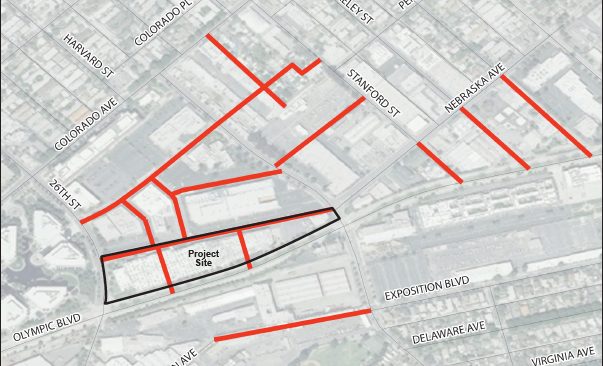 Re-using old buildings is a good thing; so why is it bad for Santa Monica that a new buyer of the Paper Mate factory is going to turn it into offices? It boils down to the three eternal verities of real estate: location, location, location. The factory sits on a crucial piece of land.

[pullquote]
Nearly half of the Hines project was going to be housing. Very little of the traffic associated with new residents would have been added to the afternoon outbound commuter traffic that drives us Santa Monicans crazy.
[/pullquote]But before I get into that, if for you traffic counts are the most important metric for urban planning, stop reading now. You’re going to be happy with the new project, at least as it compared to the Hines project. Based on the EIR for the Hines project, turning 200,000 square feet of old factory into offices will generate (by 2030) approximately 1,900 car trips a day; the final Hines project was projected to generate 6,700.

No one, however, is going to notice the difference. There’s already about 2,000,000 square feet of commercial development in the immediate area and the 26th Street freeway ramps attract traffic from the eastern portion of Santa Monica and down into Venice and Marina del Rey. The existing traffic counts on Olympic and 26th Street are in the tens of thousands without Paper Mate.

Further, nearly half of the Hines project was going to be housing. Very little of the traffic associated with new residents would have been added to the afternoon outbound commuter traffic that drives us Santa Monicans crazy. With respect to commuters, you’re talking about a difference of 200,000 square feet of commercial development between the Hines project and the new one. Santa Monica has more than 10 million square feet of offices.

Moreover, Hines was going to pay for mitigation measures at many affected intersections. The new owners won’t need to do that because they have avoided anything that would subject their project to discretionary development review (although employers in the new project will have to implement some traffic demand management (TDM) procedures).

So, no surprise, traffic around 26th and Olympic will be miserable for a long time. What are we losing that was in the old project? (And, yes, I know, the old project could have been better.)

[pullquote align=right]
This reminds me of the last big development battle in Santa Monica prior to Hines—over the downtown Target in 2001. Back then traffic-fearing residents killed what would have been one of the country’s first City Targets, but told us Target would be back with a plan to build somewhere else. Fourteen years later people are still driving outside of the city to buy a toaster, and who is it who complains loudest that there’s nothing in downtown that serves residents?
[/pullquote]It’s hard to prove a negative—that what might have been would have been better than what we’re getting. There is also, the question of metrics: many Santa Monicans couldn’t care less about what we might have lost. They already have their jobs, or retirements, and housing, and they don’t care what happens to the old industrial areas that they have no reason to enter anyway. People who might have lived on the Paper Mate site won’t be heard from. (Some in the SMRR leadership will still wring their hands about the jobs/housing imbalance, but what’s it to them? Potential residents don’t vote.)

But there was a reason that people like Kevin McKeown pooh-poohed the idea that Hines would “walk away,” or that Diana Gordon, of the Santa Monica Coalition for a Livable City, assured us that Hines was “posturing” when the developer said it could reoccupy the factory. (This reminds me of the last big development battle in Santa Monica prior to Hines—over the downtown Target in 2001. Back then traffic-fearing residents killed what would have been one of the country’s first City Targets, but told us Target would be back with a plan to build somewhere else. Fourteen years later people are still driving outside of the city to buy a toaster, and who is it who complains loudest that there’s nothing in downtown that serves residents?)

But back to Paper Mate. Everyone who thought seriously about what should be built across the street from Bergamot Station (and I guess that includes McKeown and Gordon) knew that the old factory should be replaced with a development that, using the language the City used to express the public purposes of the project, created “a well-designed and financially feasible gateway project containing a complete community.”

We’re not getting that. Although it’s possible that people might be able to walk through the project (although the current drawings indicate that the site will be fenced in), and it’s possible that the City could build a sidewalk along the north side of Olympic connecting 26th and Stewart, there’s not going to be any plaza making the corner a gateway between the station and a new, active district. There won’t be any vehicles passing through the site either: one of the most beneficial aspects of the old project was the introduction of a street grid, as shown in this map, much of which was dependent on cutting streets through the Paper Mate superblock. A grid allows local traffic to be dispersed, taking pressure away from crowded arterials.

But the biggest negative impact is that without the new streets, the LUCE and the Bergamot Area Plan, for most of the old industrial areas, are dead.

To understand why that’s bad, think about what LUCE is, or was. In 2004 Santa Monica began to update its land use and circulation plans to control inevitable pressures for growth. After six years of conscientious effort, the City adopted a well-coordinated plan to direct growth to designated areas (downtown, the old industrial areas, and boulevards) where it would have the least impact on residents. The LUCE is the plan that critics of development say Santa Monica doesn’t have. Turning the Paper Mate site into a gateway was crucial. Location, location, location.

Those development pressures haven’t gone away. Now, however, after the Hines debacle, if you’re a developer with land in the old industrial areas, or along the boulevards, why propose building anything with public amenities, anything approaching a “complete community,” with housing and new streets, anything that achieves the goals of the LUCE, when you can make plenty of money repurposing an old warehouse or factory, or building a 32-foot high retail box?