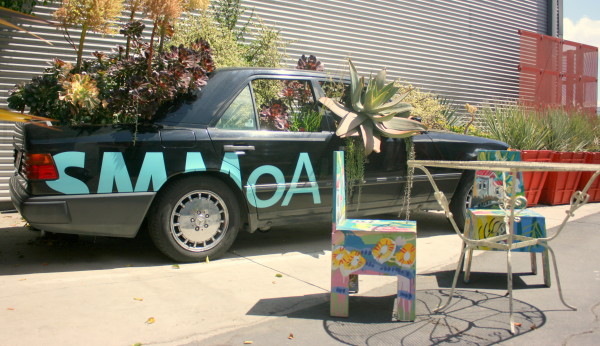 The Santa Monica Museum of Art (SMMoA) announced last week that it would be leaving Santa Monica for gallery space in nearby Century City after more than 30 years in the bayside city.

Its new home is supposed to be a temporary one. However, it is still uncertain whether the Museum will be able to come back to Bergamot Station, the art hub and future Expo light rail station in a formerly industrial part of Santa Monica where SMMoA moved from Main Street 16 years ago.

The announcement is the latest development in the city’s ongoing plans to give Bergamot Station a long overdue revitalization in preparation for the opening of Expo next year.

“I think it’s hard to say” if SMMoA will be able to return, said Elsa Longhauser, the Museum’s executive director. “It will depend on what decisions are made, how quickly they are made, and if there is a real concerted interest that welcomes having a museum like ours.”

Only a few months ago, the Santa Monica Museum of Art was quite optimistic about the prospects for an overhaul of Bergamot Station, but now it appears to be the latest victim of Santa Monica’s increasingly dysfunctional land use politics.

SMMoA lined up behind plans by 26Street TOD, one of three teams considered by the city to design the future transit-adjacent arts center.

26Street TOD’s plans featured SMMoA as an anchor tenant, but also included dozens of other perks that the Museum hoped would transform Bergamot Station into a thriving community hub, including partnerships with CalArts and KCRW. The plans even included ample open space that could be used for performances.

“We were hoping [Bergamot Station would be] the magnet that would help bring all these different cultural amenities together,” Longhauser said, adding that the Museum was very excited for the coming of Expo, which would connect Bergamot and the Museum to the greater region.

“That was the dream and the hope,” she said. “They have been postponed.”

Things really got difficult for the Museum because, while most of Bergamot Station is city-owned, SMMoA sits on a parcel that is owned by Wayne Blank, considered to be the driving force behind the original move to turn the dilapidated industrial parcel into an arts hub.

Blank was on one of the rival development teams and decided he would raise the Museum’s rent significantly after SMMoA came out in favor of 26Street TOD’s plans, essentially starving SMMoA out of its current location.

26Street TOD’s plans were also opposed by some of the for-profit gallery owners who feared an overhaul would disrupt business. All three of the new plans however, did include mitigation measures and plans for future subsidies for the gallery owners, who rent below market rate.

Ultimately, the Council voted in September to go with a different proposal, put forward by local developer Jeff Worthe. At the meeting, the Council also voted to convene a working group of stakeholders to oversee the project going forward. The working group, as prescribed by the Council, would include the Museum, gallery owners, representatives of several neighborhood groups, and someone from the Santa Monica Chamber of Commerce.

The city seems eager to see the Museum return to its home, only this time on the city-owned portion of Bergamot Station. After the news about the Museum’s move broke last week, Santa Monica Mayor Kevin McKeown told KPCC, “We not only want to have a museum, we want to have that museum, and what we have right now is a conflict between long-term plans and short-term circumstances, because we don’t control the property that they rent at the moment.”

McKeown said, “We will have some control once we build the new Bergamot Station, but obviously the museum needs to keep operating, and they don’t have a place to operate there, so they have chosen to go into what they’re calling ‘an unbound phase’.”

Longhauser was happy to hear the mayor voice his support.

“It was heartening to hear Mayor Kevin McKeown’s statement on the radio about the city’s support for the Museum as a tenant,” she said.

However, at a meeting of the Council-established working group, which convened for the first time last week, the Museum’s representative was told that SMMoA could not take part as an official member of the working group once it is no longer a tenant of Bergamot Station.

“I feel that it is essential to have the Museum at the table in discussing the future of Bergamot station, not only because we are the Santa Monica Museum of Art,” Longhauser said. “We are the only nonprofit cultural organization whose voice can be heard in that context.”

Even if SMMoA is edged out of the conversation around Bergamot Station, it won’t spell the end for the Museum. Longhauser said that since the announcement that SMMoA would have to move, the Museum has seen an outpouring of offers for spaces.

Still, the prospect of being forced out of Santa Monica permanently is troubling to Longhauser.

The coming Expo line would have meant “the ability for people to have been able to come to the Museum without a car,” which would have been “a wonderful, historic opportunity,” she said.

SMMoA has not only been a place for the arts, but has also been a major promoter of active transportation. For more than six years running, the Museum has organized Tour da Arts, a day-long festival that mixes art, performance, and music with bikes.

In the meantime, the Museum will remain “unbound,” which Museum officials describe as “a planned gestation period to refine its vision and broaden its reach.”

According to SMMoA officials, the Museum’s “ubnound” phase will begin at the end of May, following the 11th annual INCOGNITO benefit art sale.

“From interim office space in Century City, the Museum staff will organize an exciting roster of pop-up exhibitions; education and outreach initiatives; and new offerings from the retail shop, GRACIE. During its transition, SMMoA will also explore permanent sites in Santa Monica and Los Angeles County–including anchor tenancy in a redeveloped Bergamot Station,” officials said.