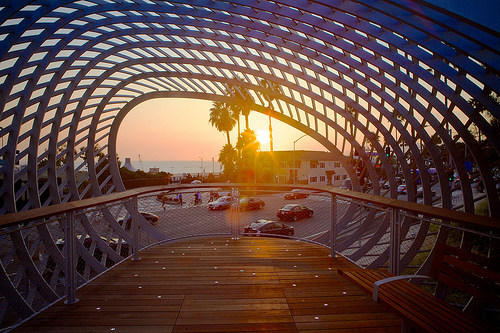 The two parks, which cover about 7.4 acres from City Hall to Ocean Avenue, received the APA’s National Achievement Award for Urban Design. Santa Monica was one of about a dozen honorees chosen from the hundreds of submissions around the country.

“Tongva Park used to be an underutilized urban swath of asphalt. We have unpaved a parking lot and put up Paradise,” said Santa Monica Mayor Kevin McKeown of the parks, which opened to the public in late 2013.

“Tongva Park is a transformational project embodying excellence in urban design, offering new connectivity in anticipation of the pending arrival of light rail nearby, and providing amenities for all members of our community, both residents and visitors,” he said. “We are thrilled that the APA National Awards Jury has recognized the success of this project in serving the people of Santa Monica.”

The two parks stitch together the Santa Monica’s Civic Center area and its downtown, which was divided when the I-10 freeway was built decades ago. Tongva Park’s pathways guide visitors in several direction, including toward the Santa Monica Pier, Ken Genser Square in front of City Hall, and the Civic Center Village. Not to mention, they are both a short walk from the 4th Street Expo terminus which is expected to start seeing passenger service next April. In fact, Metro began clearance testing on Phase II yesterday.

The city says the parks are “a new type of urban landscape that engages visitors and restores the area’s ecosystem,” which features “a lush landscape featuring rolling hills, meadows and gardens that overlook the Pacific Ocean and the historic Santa Monica Pier.”

This isn’t the first time Santa Monica has earned top honors from the APA.

The Bergamot Area Plan, a comprehensive plan to transform the city’s formerly industrial quarter into a thriving neighborhood surrounding the future light rail station at Olympic Boulevard and 26th Street, was passed by the City Council in September 2013 after years of public engagement.

The innovative Bergamot Area Plan aims to transform the area around the future Expo station into a livable neighborhood by breaking up superblocks, replacing dilapidated industrial buildings with places to live and work, and transforming the area’s streets into multi-modal thoroughfares.

That plan, howerver, was dealt a blow last year after anti-growth activists gathered signatures to kill a major transit-oriented mixed-use housing and commercial project on the site of the former Papermate factory. Santa Monica lost out on about 430 new apartments, new sidewalks, a new right-of-way that would have linked the neighborhood north of the site to the Expo station, and about $30 million for schools, parks, and other public benefits.

The new owners simply plan to reoccupy the existing building.