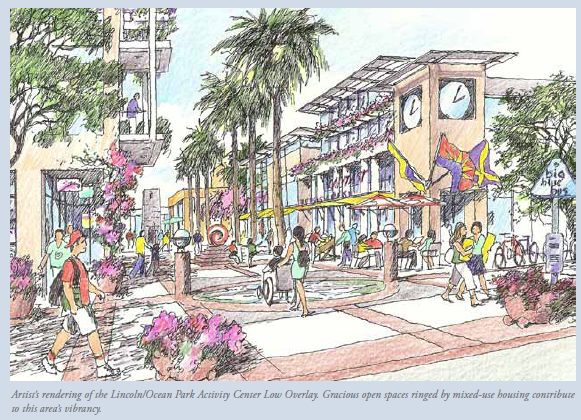 We sat down to talk to Ethan Elkind, author of Railtown: The Fight for the Los Angeles Metro Rail and the Future of the City, about California’s housing crisis, the need for growth around L.A. County’s transit system, and how Santa Monica, his former hometown, fits into the larger picture.

Elkind is an attorney who researches and writes on environmental law for the Center for Law, Energy and the Environment (CLEE) at the UC Berkeley School of Law. He also has an appointment at the UCLA School of Law Environmental Law Center and Emmett Center on Climate Change and the Environment. Below is part two of a two-part conversation. Read part one, The Failure of the Status Quo, here. You can read more of his writings about land use, transportation, and music on his personal blog.

Santa Monica Next: Let’s go back to the Papermate site for a minute. Opponents of the Hines project there claimed to many people when they were gathering signatures that they were fighting traffic when, in reality, building more housing is actually an effective way of addressing traffic in Santa Monica, since it’s largely due to commuters. You lived here during this debate. Is it possible to have a reasonable conversation around the nuances of land use decisions like this one?

But, at the same time, there’s an old expression: You can’t let the perfect be the enemy of the good. I think that applies here. There would have been a lot of new housing and it didn’t seem like it made sense, given all the other benefits, to oppose [the project].

You can’t begrudge people for looking out for their self-interest, but at the same time, I don’t believe policy makers should be deferring to people with narrow interests. They should be looking out instead for the larger public interest; [building] housing for people who currently don’t have it and can’t afford it; and providing better neighborhoods for people.

SMN: While we lost an opportunity for a lot of housing near transit, the Hines project was one project. Now, with the updates to the Land Use and Circulation Element and the zoning ordinance, those decisions will have impacts on the city and the region for decades. How is this going to impact us?

EE: My hope would be that when it comes to the Land Use and Circulation Element in Santa Monica, the elected officials really think about what they’re walking into here. What I understand of the changes they want to propose, they’re basically allowing higher story development for affordable projects. But there is no money for affordable projects. We should be building all sorts of projects. That brings affordability to all sorts of people and it can also help pay for very low income housing as well. [Note: The City Council has since amended the Land Use and Circulation Element.]

My hope is that people who care about this, who care about Santa Monica, [will] organize and try to counteract some of the negative voices, try to influence their local politics, try to get people elected to the city council or appointed to the planning commission. That’s probably the only thing that can be done at this point.

But, Santa Monica is a fantastic place and there is a lot of good development happening there compared to other communities. It’s doing well in its own way; it has just sent some unfortunate messages out to the larger public and taken a few steps backward.

SMN: You said the Hines project could have had a chilling effect on the region. How big do you think that impact is? Are we watching the dominoes fall in the other direction?

[pullquote align=right]
I find it really unfortunate when we start doing planning by ballot box where it’s easy to mislead people and it’s easy to scare people into reactionary positions that aren’t really well thought out and [to] hijack that process.
[/pullquote]EE: It’d be hard to imagine another developer [will] come in with a transit-oriented project in Santa Monica specifically. We see similar voter backlash in San Francisco for the waterfront development.

Back in the ‘80s, there was another voter referendum in L.A. — and also San Francisco in 1986 — to restrict growth.

I find it really unfortunate when we start doing planning by ballot box where it’s easy to mislead people and it’s easy to scare people into reactionary positions that aren’t really well thought out and [to] hijack that process.

It’s an unfortunate phase of backlash that we’re in. I think there are some things the state can do to deprive some of these homeowners groups of some of the legal tools they use to challenge infill projects and the state is doing that right now.

The one area I don’t see any way to reform is the threat of a voter initiative, because that’s written into the state constitution. At the very least, we can remove some of the tools used to get developers into court and delay their projects for years and years over things like a traffic study that is just encouraging the developer to put more cars on the road by providing more parking.

[pullquote align=left]
If they aren’t going to do their part to help out with the region’s housing needs and economic challenges, if a community is not willing to allow a development around rail transit networks that the whole region pays for, then I feel they shouldn’t have access to these multibillion dollar investments.
[/pullquote]We could certainly direct our public dollars into areas that are willing to create really vibrant neighborhoods. For example, if Santa Monica doesn’t want to develop around the Expo line stations, my feeling is why should all the region’s tax payers pay [for a] stop at that station? Why not just skip that station if it’s just going to be a low-rise kind of area?

There has to be that kind of stick, not just for Santa Monica, but really, statewide. This is not just a Santa Monica problem. You see it in the Bay Area, San Diego, Sacramento. If they aren’t going to do their part to help out with the region’s housing needs and economic challenges, if a community is not willing to allow a development around rail transit networks that the whole region pays for, then I feel they shouldn’t have access to these multibillion dollar investments.

It’s a drag on taxpayers to have to pay for underperforming rail lines. It’s a drag when you don’t have enough riders, and what generates riders are the jobs and housing around the transit stations. If locals don’t allow the jobs and housing to come in, then they are basically telling everyone else to pay for their small group of residents and commuters to have access to a fancy rail line. And, yet, they aren’t willing to make the changes necessary to make the rail line a cost effective investment.

There is precedent for this. In San Francisco, there’s a policy at the Metropolitan Transportation Commission that conditions new transit investments on cities rezoning and putting in place station area plans. It’s true for some of the BART [Bay Area Rapid Transit] extensions. They said, “If we’re going to pay for this BART extension in your neighborhood, you had better make sure to allow development to happen around this station.”

I think it would have been smart for Metro to put that same policy in place and really require that new development is directed to their station areas. It might have helped avoid some of this situation.

EE: Demographics and the market are shifting. People really want walkable, bikeable communities. And I think that’s really the path forward as an alternative to traffic congestion. We should be providing people with alternatives to traffic and not trying to pretend we can just make the traffic go away.

SMN: By pushing people farther out and forcing them to commute in.