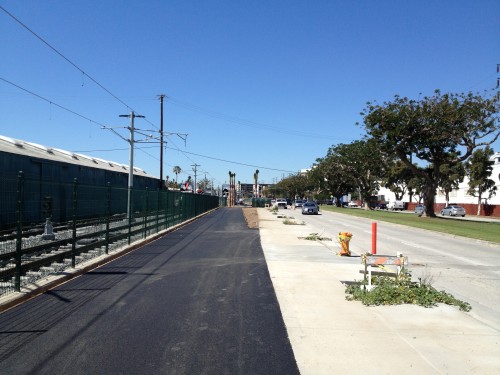 Editor’s note: This post originally appeared in Los Angeles Streetsblog on May 18.

Last week, in a short article celebrating that LADOT was beginning its portion of the bikeway that will run parallel to the Expo Line in West L.A., I stated that the separated bike path portion of the route was not under construction.

I couldn’t have been more wrong.

Via the Expo Construction Authority comes word that not only is the bike path under construction, it should open with the light rail line in early 2016.

“The bike path is well under construction, and the plan is to open the bike path along with the light rail line.  Currently there is grading, lighting, irrigation, and drainage work throughout, and approximately one mile has already been paved.  The largest stretch of paving is between Centinela and the 26thStreet/Bergamot station, and the sections from Olympic to 20th Street and from Westwood to Military have also been paved.”

There are still some issues to be worked out, most notably the routing of the bike path in the area surrounding Westwood Station where there are also plans for a greenway and water park. However, the good news is that both Metro’s separated bike path and the bike lanes being painted by LADOT to provide easy access from downtown Culver City to downtown Santa Monica are currently under construction/paint and the full route should be ready for a ribbon cutting with the train.

My apologies to both the Construction Authority and our readers for getting it wrong. Below are two more pictures of the Expo Bike Path, as it exists today, in Santa Monica.