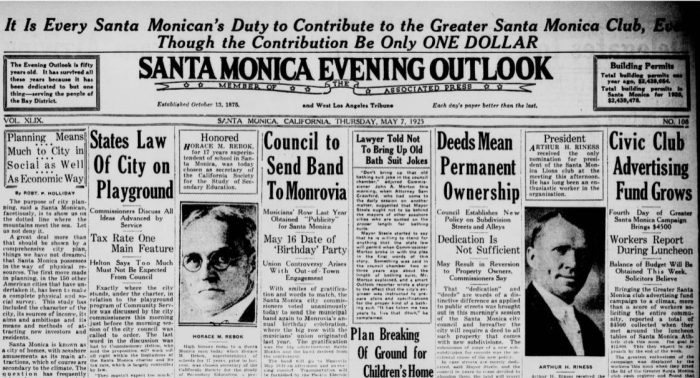 It’s time for Throwback Thursday. Thanks to the Santa Monica Public Library archives, we can take a journey together back to 90 years ago today. Bathing suit length, the city’s industrial health, and the coming Mother’s Day celebration were at the forefront of everyone’s mind.

Santa Monica as “An Amusement Center”

According to the front page of the Evening Outlook on May 7, 1925, there was a battle raging in Santa Monica about — what else — the planning of the city’s future. The issue facing Santa Monica? How should Santa Monica grow its industrial base without “damaging its reputation as an amusement center.” 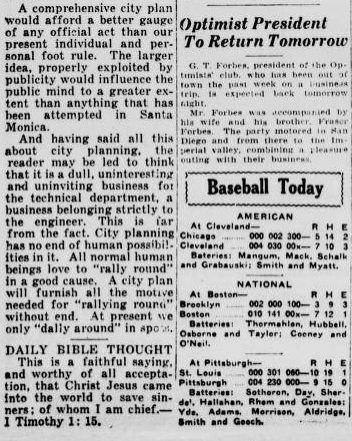 Santa Monica was a hopping place in the 1920s, apparently, in part due to the booming Pleasure Pier. It was also one of the few places you could still get a drink at the height of Prohibition, thanks to a small fleet of offshore gambling ships. Some concerned residents wanted to make sure that, as the city’s industries grew, it wouldn’t drive away the many people visiting Santa Monica’s shores for fun. To that end, they were advocating that the city adopt a new-fangled concept: a comprehensive general plan.

“City officials are bitterly criticized today, chiefly because their constituents do not understand the meaning of ordinances, resolutions and other orders in council in any relation to the progress of the city as a whole. A small and selfish measure is applied to many public acts. This is because no other measure has been provided,” the Outlook’s front page reads. Sound familiar?

Of course, in 1925, no commentary on city planning would be complete without a daily Bible thought and the baseball scores.

It was also deemed headline worthy that the mayor rebuked a man for bringing up a then years-old joke.

Apparently, the topic du jour was whether the state would regulate the length of people’s bathing suits and a lawyer quipped that the Santa Monica mayor ought not to support it, given a joke written by “a smart Outlook reporter” several years earlier.

The joke: That the mayor had instructed the city engineer to “prepare plans and specifications for the proper kind of bathing suit.”

It may seem impolitic by our standards to so nakedly advertise to traditional gender roles, but in 1925, things were a bit different.

THOR Washer proudly boasted endorsements from “over 800,000 housewives” for their electric washing machine. Surely, it was state of the art technology. I guess there weren’t as many househusbands back then.

“Any owner will tell you her Thor paid for itself the first year,” the ad reads.