Home Events Coming Up: Fireworks and Parades for 4th of July, Kidical Mass, and... 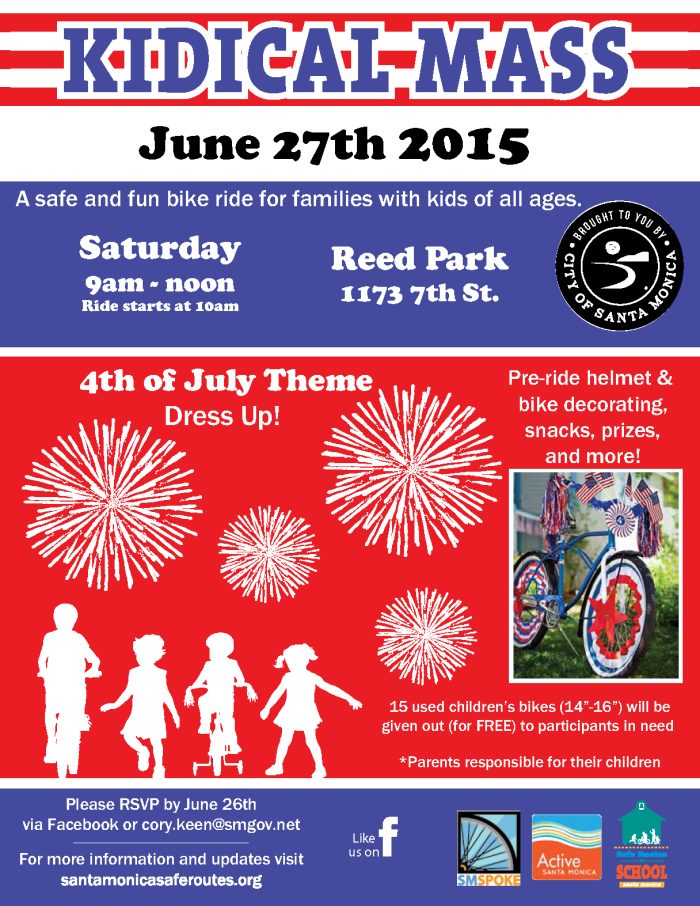 This week Santa Monica is gearing up for Independence Day with a 4th of July-themed Kidical Mass, fireworks at Santa Monica College, and the annual Main Street Parade. The Public Library will also kick off its SMPL at the Beach series this week.

This year, the Ocean Park Association invites you to celebrate “Inspirational Heroes,” the theme for the neighborhood group’s annual 4th of July Parade.

“The parade’s Grand Marshal is one of Santa Monica’s local athlete heroes, Will Montgomery, Global Messenger for Special Olympics,” according to a press release put out by OPA last week.

The 1.5-mile route takes participants from the Santa Monica Civic Center south on Main Street, turning west on Marine Street and then north on Barnard Way to Beach Parking Lot 5 South,” according to the release. “Spectators are welcome to sit along the route and are encouraged to walk or ride their bikes to the parade route.”

The parade starts at 9:30 a.m. on July 4. For those who want to be in the parade, participant forms for the parade may be found at http://www.opa-sm.org/parade and must be submitted by June 25 along with the $25 fee. Groups may walk, ride bikes, scooters, other forms of unique transportation or may ride in a classic car or float. Live or recorded music and animals are  allowed pending permission from OPA.  In addition to participants, parade organizers are looking for volunteers to help with the event. If interested, volunteers should email july4thsm@gmail.com.

Can’t wait for OPA’s parade? Take the kids for a 4th of July-themed ride on Saturday June 27 for a family-friendly Kidical Mass bike ride at Reed Park.

“There will be prizes for best decorations, snacks, and other family activities. Bike safety checks, helmet decorating, and snacks/ refreshments start at 9 a.m.,” officials said.

After Kidical Mass, head over to the the annual fireworks show at SMC.

“The celebration – the only one of its kind in Santa Monica – will feature a dazzling fireworks show by Rialto-based Pyro Spectaculars. Entertainment includes the popular Derek Bordeaux Group playing a mix of Motown classics, Jazz, R&B, and Blues standards, with Eddie Jauregui as Master of Ceremonies,” SMC officials said.

The Santa Monica Public Library kicks off its summer at the beach this week.

“Grab your towel and sunscreen, we’ll bring the books; Santa Monica Public Library is heading to the beach!” library officials said in an official release. “Summer and reading belong together like surf and sun, so we’re setting up shop on the shore and signing out books to literature hungry beachgoers at a series of five ‘pop up‘ libraries between June 26th and August 28th.”

You can find SMPL at the Annenberg Community Beach House from 10 a.m. to 3 p.m. this Friday.

Expect a lot: Santa Monica Public Library at the Beach will feature a curated collection of books for readers of all ages, a Surfside Lounge to relax and grab some shade, and beach-themed activities for the whole family. Programs will include: Seaside Story Time for Kids, Hula Dancing and Hula Hooping classes, nautical crafts, and our new South Beach Reads Book Group for adults. Librarians will be on hand to sign out books, answer questions and demonstrate cutting edge library apps, eBooks and streaming media. In addition, anyone signing up for a library card will receive a free Santa Monica Public Library beach tote.