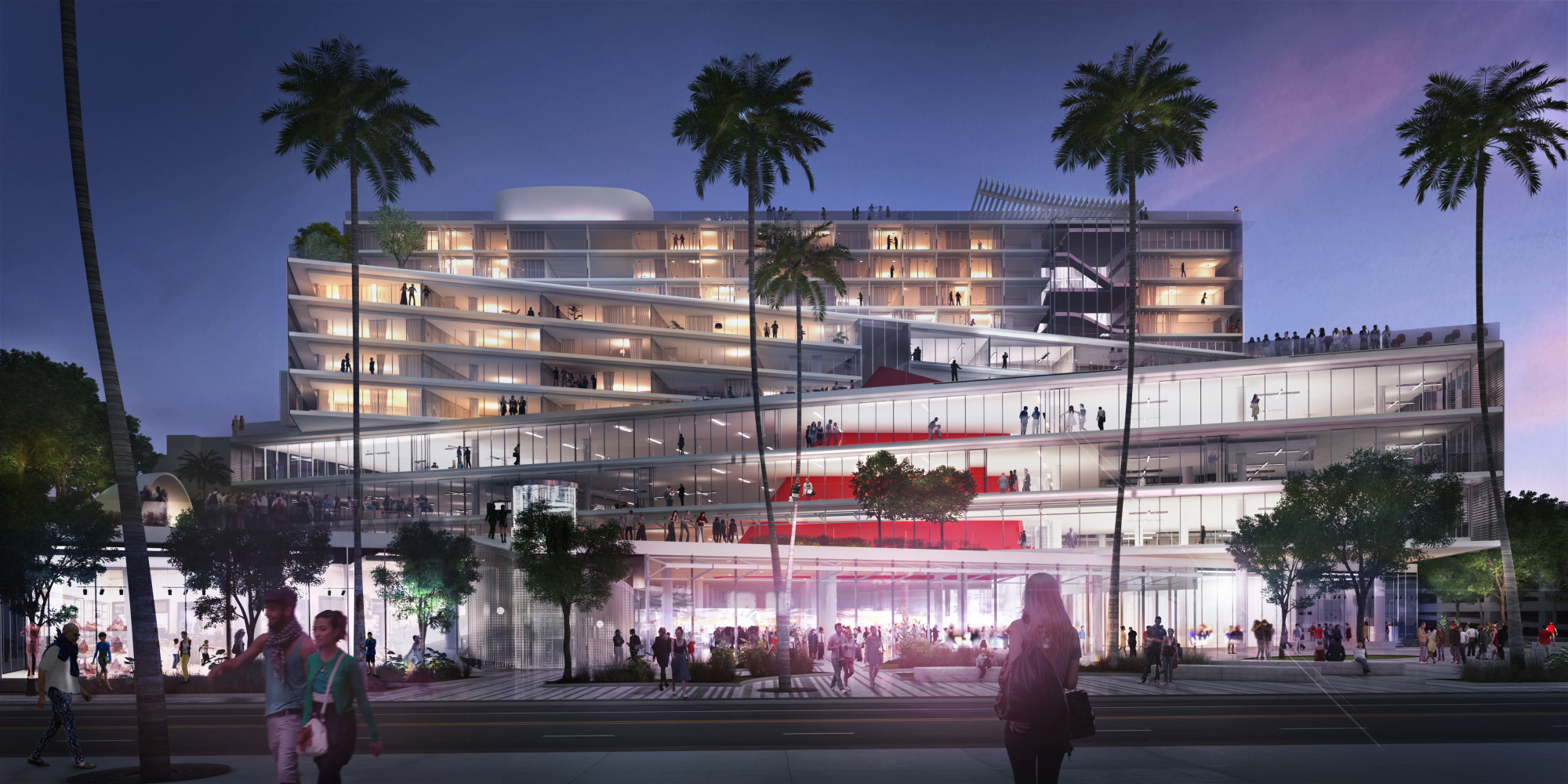 The Plaza at Santa Monica could to be one of the most striking new buildings built in the bayside city — or possibly even in all of L.A. County — in decades.

But first, it has a much more public process to go through, starting with a Planning Commission meeting on Wednesday for a floatup, during which the project’s team will get notes from the commissioners on the current design.

The project would add a boutique hotel (complete with a rooftop bar), about 50 affordable housing units operated by the city’s premiere affordable housing nonprofit, Community Corporation of Santa Monica, a bike center, creative offices, a children’s museum, and multiple levels of public open space to the city-owned lot about three blocks from the future Expo light rail station.

Currently, the 2.5 acre plot of land is home to a couple banks, a major parking crater, and some other single-story retail.

Although there has been some confusion in the press, the proposal that the Planning Commission will hear is the same proposal the City Council looked at last June. The meeting is for the design team to hear feedback before retooling the proposal.

The specs remain the same as what was presented last year: The proposed 148-foot tall design includes a 127,000 square-foot hotel, 172,000 square feet of office space, 86,000 square feet of affordable housing, 40,000 square feet of retail (is that enough for a City Target?), a bike center, and 1,220 underground parking spaces. It’s a lot of parking, but some of the spaces are meant to replace a nearby parking structure that will be torn down due to age.

While the amount of office space is a concern for some, the project developer, John Warfel of Metropolitan Pacific Capital (MPC) pointed out at a public meeting about the project last May that the affordable housing needs a deep subsidy and the commercial space provides that.

The commercial office space also offsets the cost of programming of the public open space, he said.

Warfel, along with Koolhaas and his team, were selected by the City Council in December 2013 over two other teams to undertake the project. OMA and MPC have also joined forces with OLIN, the landscape architecture firm behind the J. Paul Getty Center, and Biederman Redevelopment Ventures to oversee the design and programming of the 56,500 square feet of public open space proposed for the project’s first two levels.

The project has enjoyed broad support in the community, including from the local hospitality workers union, UNITE HERE Local 11.

The opposition has been calling for the parcel to converted into a park, though they haven’t presented a plan to pay for that, even though the proposed project has more open space it would if the parcel were simply turned into park land.

You can take a look at some more images below.