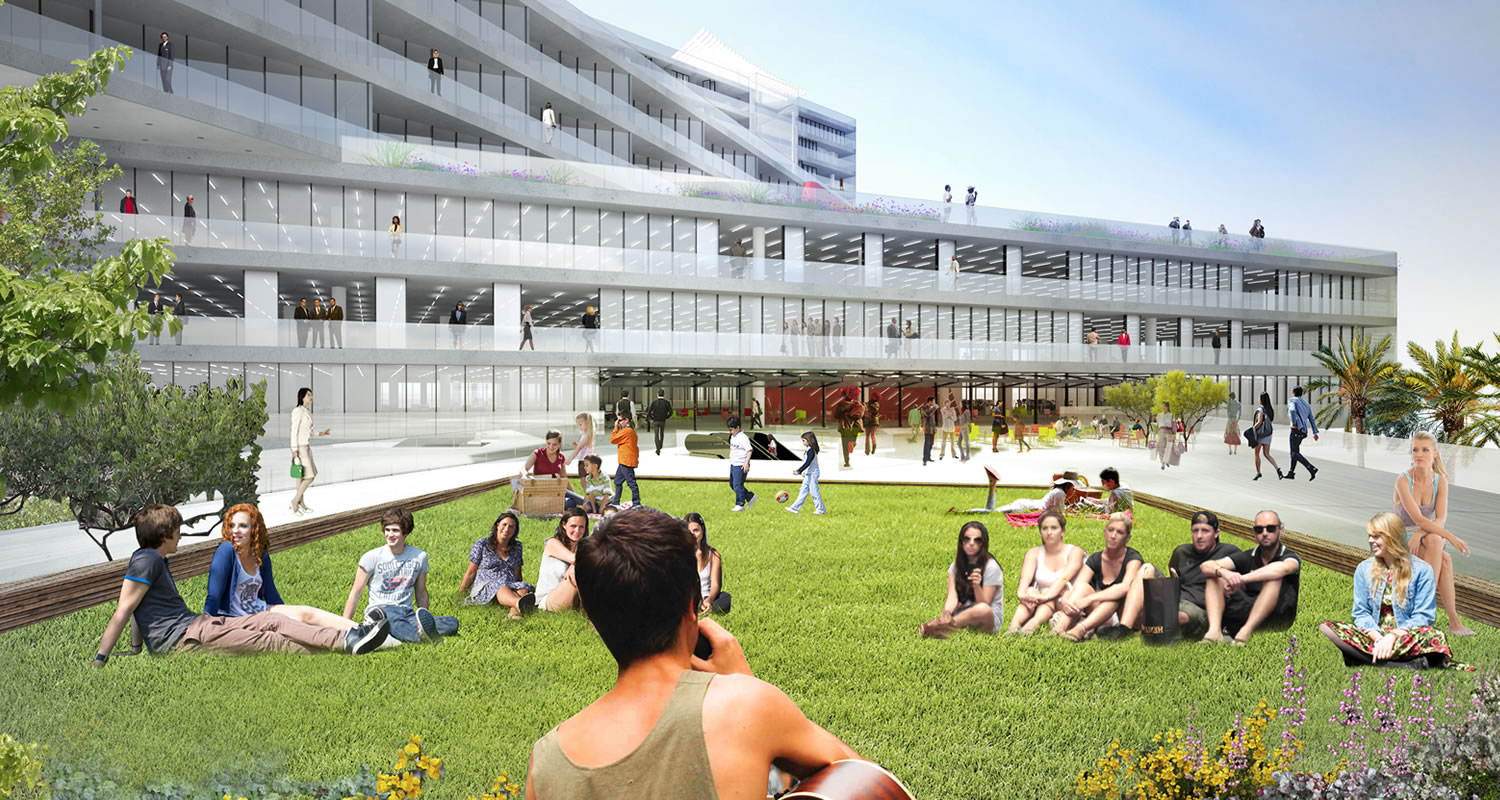 Though it is still very early in the process, the Planning Commission Wednesday recommended moving forward with negotiations for the Plaza at Santa Monica project, slated for city-owned land in the heart of Downtown.

While the Planning Commission voted 4-to-1 to recommend that the City Council begin negotiations with the developer team, the Commissioners had some notes about how they would like to see the design improved.

“I would hope to see more housing units in this project” both market-rate and affordable, said Anderson, adding that she would be willing to part with some of the 172,000 square feet of office space, revenue from which is helping to subsidize the aspects of the projects that don’t generate revenue.

In recent years, Downtown Santa Monica has seen a net loss of office space as the area becomes a mixed-use neighborhood.

The Commissioners largely applauded the design, by Pritzker Prize-winning architect Rem Koolhaas’ firm, OMA, though some of the public testimony was critical of the proposed height, about 148 feet.

Not everyone saw the height as an issue. Proponents of the project outnumbered the opposition almost two-to-one during public testimony with about 20 people testifying in favor of the proposed project and about 12 in opposition.

“The height itself is not particularly an issue. I think this would be about the fifth tallest building in the Downtown area,” said Commissioner Carter Rubin. “I want to make sure we divorce the height question from the traffic question because they are not explicitly related.”

Responding to comments during public testimony calling for the 2.5 acre site to be turned into open space, Rubin said, “One way we might engage the people who have expressed the desire to see a park here and get them supportive of the direction of this project is to think about how we can use that ground lease revenue to support additional park expansion in Santa Monica.”

He noted that between Palisades Park, Reed Park, and Tongva Park, the 4th/5th and Arizona site is in a location surrounded by public open space and that there are places in the city where investment in open space is more needed. The project itself would have about 56,500 square feet of public open space on the first two levels, which will be programmed by a nonprofit.

Only Commissioner Richard McKinnon voted against recommending that the Council begin negotiations on a development agreement for the Plaza at Santa Monica because he doesn’t want the building to be taller than 84 feet. Commissioners Jim Ries and Jennifer Kennedy were not at the meeting.

The project will go before the City Council in August for further discussion and review before incorporating the comments into a revised design.

As currently proposed, the project would add a boutique hotel (complete with a rooftop bar), about 50 affordable housing units operated by the city’s premiere affordable housing nonprofit, Community Corporation of Santa Monica, a bike center, creative offices, a children’s museum, and multiple levels of public open space to the city-owned lot about three blocks from the future Expo light rail station. Currently, the 2.5 acre plot of land is home to a couple banks, a major parking crater, and some other single-story retail.

Metropolitan Pacific Capital (MPC) Principal John Warfel, along with Koolhaas and his team, were selected by the City Council in December 2013 over two other teams to undertake the project. OMA and MPC have also joined forces with OLIN, the landscape architecture firm behind the J. Paul Getty Center, and Biederman Redevelopment Ventures to oversee the design and programming of the public open space proposed for the project’s first two levels.

The project has enjoyed broad support in the community, including from the local hospitality workers union, UNITE HERE Local 11.

Disclosure: Carter Rubin serves on the steering committee of Santa Monica Next.