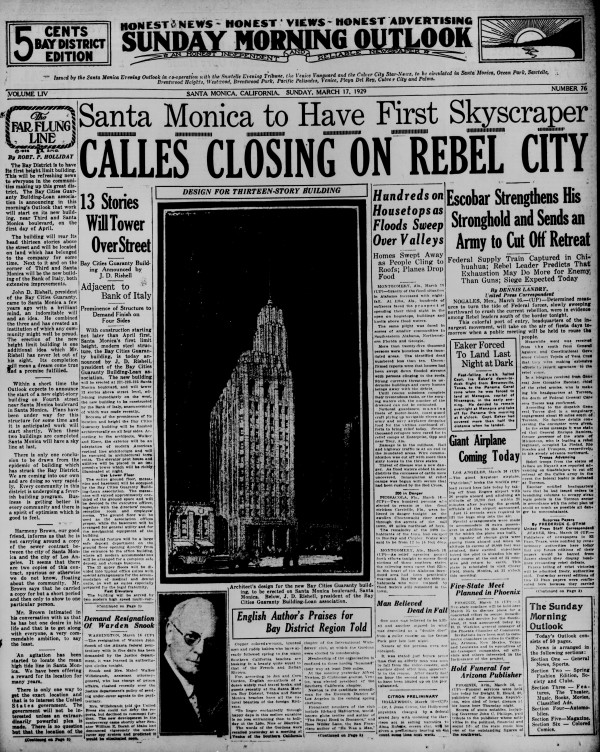 ‘Twas a glorious day in the bayside city of Santa Monica nearly 90 years ago. On March 17, 1929, the Outlook heralded plans by the homegrown Bay Cities Guaranty Building-Loan Association to construct the burgeoning city’s first “skyscraper” on Santa Monica Boulevard between Second and Third streets. We know the building today as the historic Santa Monica Clock Tower.

The 13-story “modern steel structure” commissioned by Bay Cities Guaranty President John D. Rishell and designed by Walker and Eisen Architects was to be “an impressive tower which will be richly illuminated at night” with a “modern high-speed elevators” and interior design that “will be the last word in decoration,” the Outlook trumpeted.

It not only signaled a new era for Rishell’s local business, but also for the whole city.

The building’s completion, according to the Outlook, “will mean a dream come true and a promise fulfilled.”

In addition to the Bay Cities Guaranty building, Outlook columnist Robert P. Holliday, explained, “Within a short time the Outlook expects to announce the start of a new eight-story building on Fourth street near Santa Monica boulevard in Santa Monica. Plans have been underway for this structure for some time and it is anticipated work will start shortly,” he wrote.

“When these two buildings are completed Santa Monica will have a sky line at last,” Holliday opined. “There is only one conclusion to be drawn from the epidemic of building which has struck the Bay District [Downtown Santa Monica]. We are coming into our own and are doing so very rapidly… Business is getting better in every community and there is a spirit of optimism that is good to feel.”

Construction on Santa Monica’s new crown jewel started on April 1, according to the Outlook. 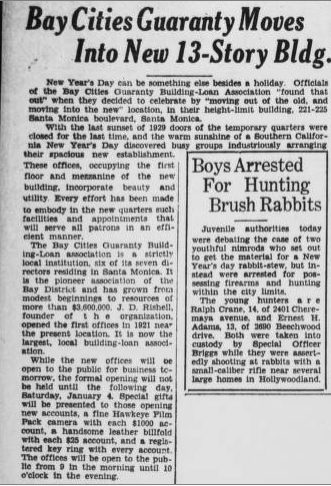 About eight months after the project broke ground, Bay Cities Guaranty moved in to the new Art Deco tower.

“New Year’s Day can be something else besides a holiday,” the Outlook reported. “Officials of the Bay Cities Guaranty Building-Loan Association ‘found that out’ when they decided to celebrate by ‘moving out of the old, and moving into the new’ location in their height-limit building, 221-225 Santa Monica boulevard, Santa Monica.”

The building’s official opening was on January 5, 1930, an event attended by “thousands,” according to the Outlook report.

A few days before the official opening, columnist Robert P. Holliday had the “exceptional pleasure” of being given a guided tour of the new building, conducted none other than by J. D. Rishell himself.

“Santa Monica has for a long time needed a building of the type,” wrote Holliday of the new tower.

“From the time Mr. Rishell first announced he intended to build a limit-height reinforced concrete building, there were croakers who insisted it could not be done and that Santa Monica did not need such a large edifice,” Holliday wrote. “Santa Monica needs all the large buildings she can get and Mr. Rishell is just finishing up his demonstration of the fact that such a building can be erected.”

For Holliday, proof that such a project could be built in Santa Monica was an argument against being annexed by Los Angeles, a perennial debate at the time.

“From time immemorial we have heard the statement made in Santa Monica that large financial institutions would not loan money to erect great buildings in this community,” he wrote. “That statement has been used as an argument for annexation until it has become very tiresome. Mr. Rishell has demonstrated that the money can be obtained for any kind of building in Santa Monica, providing the proposition is a good one.”

According to Holliday, Rishell “went serenely ahead and fought his way to victory without once weakening” and as a result, “Santa Monica owes a huge debt of gratitude to the man who has given us our first limit-height building.”